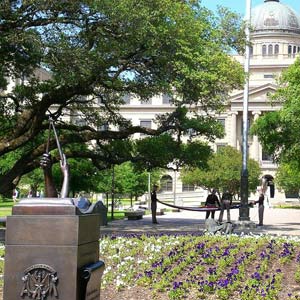 No easy answers where free speech clashes with hate speech.

Congress shall make no law respecting an establishment of religion, or prohibiting the free exercise thereof; or abridging the freedom of speech, or of the press; or the right of the people peaceably to assemble, and to petition the government for a redress of grievances.
—First Amendment to the United States Constitution

The girl dribbled the ball up the basketball court, easily switching hands as she worked her way toward the goal. I kept my distance, knowing that if I guarded too closely she’d speed past me on her way to an easy layup. She faked a drive to the basket, and when I was hopelessly off balance, nailed a twenty-foot jump shot.

“In your face!” she laughed.

In my mind’s eye, Amy Burns will always be that young girl with the quick smile, easy laugh, and deadly jumper, but the memory of the hour we spent playing basketball during a religious retreat is now three decades old. Over the years I would continue to teach the young adults at our church, and while many would lead interesting lives, none more so than Amy. In addition to a series of high-pressure corporate jobs, she even spent a few years working in war-torn Iraq.

Late in 2016, when she accepted the position of Senior Vice President & Chief Marketing and Communications Officer at Texas A&M University, I thought her life might become slightly less stressful, but I was wrong. A week before she arrived on campus, the president of the university asked for Amy’s counsel: A private citizen had arranged for a white supremacist to give a speech on campus, there was no existing law to prevent the appearance, what should the university do?

Ask this “free speech question” of different aged Americans, and you will receive very different responses.

According to Pew Research, 40% of people born between 1982 and 2004, the Millennials, believe that the government should be able to prevent people from publicly making statements that are offensive to minority groups. Only 25% of us Baby Boomers believe so. And just 12% of the Silent Generation, the men and women born between 1925-1945, endorse such a line of thought.

Like it, or not, the trend is clear. So what has changed?

Imagine, for a minute, a group of rich and powerful white men, who, in addition to leading a national political party, have vested interests and undue influences in business.

What? No, I am not thinking about Trump and his Wall Street cronies, but now that you mentioned his name, I will offer that if I wished to write, “He’s a no-good, self-serving narcissist,” I could, due to the events of 1790-1800.

The Federalist Party, led by one of our Founding Fathers, Alexander Hamilton, believed in and wished to form a strong central government. Two other Founding Fathers and eventual presidents, Thomas Jefferson and James Madison, suspicious of ceding so much power to a handful of people, argued against such a notion.

Prior to the presidential election of 1800, the Federalist Party, which controlled all three branches of government, passed the Sedition Act of 1798. The Act made it a crime to publish any false, scandalous, and malicious writing against the government of the United States, the president, or either house of Congress, but not against then Vice-President and the party’s future opponent for president, Thomas Jefferson.

In response, Jefferson (who would become president in 1801) and Madison drafted the Virginia and Kentucky Resolves, declaring the Sedition Act to be a violation of the First Amendment. Madison had not only written the First Amendment to the Constitution, but the other nine that followed, collectively, our Bill of Rights.

By the mid-1820s, the Federalist Party had all but disappeared. In a footnote to history, Alexander Hamilton died in 1804, the loser of an old-fashioned gun duel with his long time antagonist, the sitting Vice President, Aaron Burr. We take a reluctant leave of such an interesting moment in American history and move to the 1960s.

Such was one of the anti-war slogans of the 1960s, shouted by many of my generation, who believed that the government was lying to the American people about the “success” of the Vietnam War. “We’re winning,” the government lied. “You’re lying and we’re dying,” we cried.

When the esteemed broadcaster Walter Cronkite broke with his tradition of simply reporting the news to opine that the war was a mistake, President Johnson told an aide, “If we’ve lost Cronkite, we’ve lost Middle America.”

James Madison would have been proud that the “checks and balances” inherent in his First Amendment helped stop the Vietnam War.

He might have been less proud, however, when my generation burned the American flag in protest of the war, one of many acts that have caused “we the people” and our court systems to squabble about the definition of First Amendment rights.

Does the First Amendment apply to hate speech? Do I have the right to post what I want about whom I want on Facebook, Twitter, or YouTube? What separates art from pornography? Is Playboy obscene? How about Penthouse or Hustler? In the last hundred years, our Supreme Court has ruled on many such matters, interpreting the words that Madison had written from earlier and less complex times.

Those three simple words appeared before last year’s election on a wall at Emory University. Concerned that the mere name of the person who would turn out to be our future president would stress some students, Emory’s president pledged to provide them a “safe environment.”

Are you kidding me?

Hey, you precious young darlings, when I attended college the United States National Guard shot and killed student protestors at Kent State and the University of California-Berkeley, fifty thousand of my generation lost their lives in Vietnam, and a number of my generation were beaten and jailed by the police during the Civil Rights protests of the 1960s.

And please, if you are one of the 40% who wishes “the government” to define and pass laws limiting speech that you find offensive, think the matter through! Donald Trump is our president! Our Congress has Republican majorities in both the House and the Senate! So you wish to cede some portion of free speech rights to the judgments of these like-minded people?

My over-fifty years of age friends of all political persuasions, feel as I do: Better to tolerate the extremists then to cede any portion of our First Amendment rights. So does Joanne Berger-Sweeney, the middle-aged African-American president of Trinity College in Connecticut.

Frankly, I get it. Lately, some campus protests around the country have gone awry in truly ugly ways. Now it’s commencement season. Are controversial speakers going to be uninvited and ceremonies halted by protests?

If so, all of us in higher education should be ashamed. It’s our job as educators to uphold free speech and to teach the responsibilities that come with that freedom. And, yes, we must provide safe spaces, spaces that are safe for speech, not from it.

So what did my friend and Senior Vice President at Texas A&M recommend to that college’s leadership?

“I suggested that it would not be in our interest to arbitrarily cancel the event. As distasteful as it was, by the university by-laws, he had the right to give his talk. If we canceled, A&M would have received much criticism from those who believe in free speech, no matter the subject matter.

“Once that matter was decided, I suggested we hold a different event at the same time, only at a much larger venue. Those who wished to affirm the inclusive values that Texas A&M stands for could attend, as we celebrated the diverse nature of our university and country.

“But despite our positive initiatives, we knew the risk of conflict was high, and that any type of confrontation could lead to violence, as has happened on other campuses. So we met with the various law enforcement agencies to develop plans and contingencies in the event of trouble. Thankfully, there was none. While the white supremacist was allowed his say, thousands of our students had a place to share their far more affirming values.”

Thirty years have passed since Amy and I played our basketball game. Her mom and dad live nearby, so once or twice a year she stops by for a visit. I am proud of her many accomplishments, no more so than the time she skillfully managed to protect the challenge to our nation’s precious First Amendment.