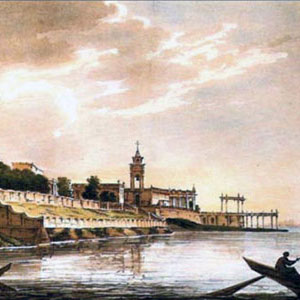 There is no visual record of the Indian scene until the end of the 18th century when British professional artists began coming to India in search of fame and fortune. Portrait painters were the ﬁrst to arrive lured by the prospects of patronage from the British ruling elite and Indian nawabs and princes. Then followed other artists interested in recording the Indian panorama with its bewildering diversity of people and its varied landscape with mighty mountains, majestic rivers and magniﬁcent architecture.

Of all these British artists, William Hodges was undoubtedly the pioneer in the ﬁeld of landscape painting and also one of the most sensitive and poetic whose writings are as unique as his paintings. Born in London in 1744, Hodges came from a humble background. While serving as an errand boy he came to be noticed by well-known British artist Richard Wilson, the father of British landscape, who was so impressed with the young boy’s artistic talent that he decided to take him on as his pupil. Hodges came to India in 1780 and received generous patronage from the then Governor General Warren Hastings who not only gave him a large number of private commissions but also got him a subsidy from the East India Company. Hastings was deeply impressed by his work and he acquired as many as 36 oil paintings of Indian views by Hodges. Hastings also had a good collection of his pencil or ink drawings of Indian scenes, which now form part of the collection at the Yale Center for British Art, in New Haven, Connecticut.

Hodges visited and recorded some of the great Mughal monuments at Delhi and Agra. He was struck by the extraordinary beauty of the Taj Mahal, writing, “The effect is such as I confess I never experienced from any work of art. The fine materials, the beautiful forms and the symmetry of the whole with the judicious choice of situation, far surpasses anything I ever beheld.” Hodges was particularly fascinated by the light and atmosphere around the country. He wrote, “The clear blue cloudless sky, the polished white buildings, the bright sandy beach, the dark green sea, present a combination totally new to the eye of the Englishman.” He added, “the more brilliant the sunshine the more I love to see the image—I have frequently stood transported at the wonderful brilliance of the image portrayed on the screen, at the beautiful touches of sunlight amongst the trees and the ﬁne masses of broad light and shadow everywhere pervading the picture.” Hodges experimented with placing local figures, primarily village women, in the foreground of his landscape paintings.

He returned to England at the end of 1783 and his famous series of aquatints titled Select Views of India was published in twelve parts between 1785 and 1788 with a description of each scene in English and French. The plates, based on his drawings made between 1781 and 1783, were engraved in aquatint and etched by Hodges himself. The aquatint technique was still in its infancy, but Hodges used it with exceptional skill and succeeded in preserving the atmospheric qualities of his original sketches made on the spot. The series was dedicated to the East India Company, which bought a sizeable number of sets of the 48 plates bound in two volumes. It was an unprecedented work, for people in the West had never before seen such a vivid array of Indian monuments and scenery from sketches made on the spot.

Hodges was particularly charmed by the winsome manners and polished behavior of the Indian people, which he considered the hallmark of the most highly civilized state of society. Unassuming and endowed with great personal charm, he made himself at home even in remote villages, never visited by any European before him. He admired the simple country folk and mixed freely with them, enjoying their hospitality with curries and ‘pillaw.’

Hodges’ journal of his travels in India (1780-83), published in 1793, is a remarkable document with some of his observations verging on the poetic and others highly illuminating as well as amusing and romantic. Struck by the awe-inspiring grandeur of the mighty Ganges, he was equally captivated by the “simplicity and primitive appearance of the people.” Admiring the river, he wrote, “The rivers I have seen in Europe, even the Rhine appear as rivulets in comparison with this enormous mass of water. The meandering of the river Ganges through the ﬂat country, and glittering through the immense plain, highly cultivated, as far as the extent of the horizon where the eye is almost at a loss to discriminate the termination of the sky and land.” Watching a group of Muslim women visiting tombs at night, he wrote, “it is both affecting and curious to see them proceeding in groups, carrying lamps in their hands which they place at the head of the tomb: the effect considered in a picturesque light, is highly beautiful; with that of sentiment, it is delightful.”

Just as the British concept of the picturesque inﬂuenced their landscape painting, the Western concept of beauty had its impact on their portrayal of the native people. Hodges openly admitted that his portraits of Indians, particularly of women, were based on the ideas of classical beauty. He watched the women at Banaras Ghats and wrote, “To a painter’s mind, the ﬁne artistic ﬁgures present themselves, for example when he observed a beautiful female form ascending the steps from the river with a wet drapery, and with vases on their heads, carrying water to the temples.”

Hodges enjoyed traveling by palanquins instead of taking the river route. He could afford that since he received a substantial salary from the East India Company through Hastings. He gives a vivid description of the facilities for travelers including wells and shady banyan trees, and makes a special mention of Sher Shah Suri for his “most humane attention to the comforts and accommodations of his people.” He was delighted to meet a variety of travelers on the road and under the shade of banyan trees by the side of wells or tanks. As he saw men, women and native soldiers there, he drew their sketches on the spot. He witnessed and recorded a sati scene where a Hindu woman was being led to the funeral pyre of her dead husband.

Hodges exhibited his Indian views to an appreciative audience in London and was elected a member of the Royal Academy in 1789 and was hailed as a very intelligent and ingenious artist. He retired in 1795 and opened a bank at Dartmouth, which failed and brought him ﬁnancial ruin. Faced with failing health and harassed by ﬁnancial troubles, he committed suicide in 1797. A reappraisal of his work and his light-ﬁlled paintings by some art historians reveals him as an artist who was ahead of his time. For Indians, of course, William Hodges was the ﬁrst artist to portray a true to life picture of the Indian scene. In fact Hodges was the founding father of the great illustrated and colored albums of India in the late 18th and early 19th century and inspired so many other British artists who came later and produced many great works on India.