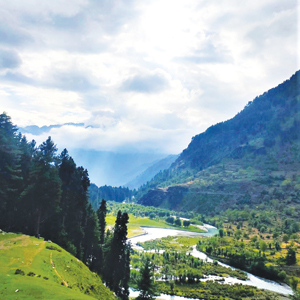 Nestled in the foothills of the Himalayas, Poshmarg, with houses lit up by gleaming electric bulbs, looked like the Milky Way. Many residents were watching a special New Year’s Eve telecast on the last day of 1990 at Masterji’s house, which had the town’s only color TV set. Masterji gained notoriety for having bought it while returning from the Haj. The more religious elders accused him of bringing Satan’s doll, the cause of immorality among many local youth.

That night, a big explosion hit the soldiers’ camp, not far from the town’s entrance. The blast was followed by countless gunshots. Farooq, who had already left Masterji’s place with some of his friends, rushed home to join his family members in the kitchen. Stricken by fear, they were mainly worried about Fatima, Farooq’s sister. She was expecting a baby soon.

The loudspeaker blared. “Let us gather in the mosque—better to die together,” announced Jalal-ud-Din, a respected muezzin. Everyone held their breath. Farooq immediately began to put some essentials and a blanket in a bag. Asking his family to hurry, he added, “It’s not safe to stay here.”

But his father, Bubb, and Moji, his mother, decided against leaving the house. “Why don’t you understand the gravity of this situation,” Bubb said. “It isn’t safe to leave now.”

“It’s not safe to stay here as well,” Farooq declared. “It would be easier to tolerate the danger together.” His parents remained unconvinced, and he left the house with Fatima.

The biting cold made it hard to run. Shadows of the naked chinar trees, creating a narrow path on the road to the mosque, seemed to offer protection. Most of the town’s inhabitants, to Farooq’s surprise, were already in the mosque. The mosque’s green walls reflected the light of the soft yellowish bulbs, and the shadows of people, appearing on the mosque’s wall, looked like sketches, some very big and some tiny. Filled with wailing women, anxious men, and weeping, sleepy children, the mosque became Poshmarg, at least for the time being.

When a young person joked about Masterji’s presence in the mosque, another youth said, “Yes, I’m seeing him for the first time in the masjid after he returned from the Haj.”

An elderly man said it was not the time for humor, but the two youngsters giggled covertly.

Fatima felt restless, and soon she was groaning in pain. There was a half-empty shelf of religious books, mainly copies of the Quran, on the left side of the mosque, and she was resting just below it. Soon, women rushed to Fatima’s aid, and someone summoned Rahat Maas, the midwife who was sitting in a corner. While the women were busy, the men covered that side of the mosque with whatever was available. Bashir, Fatima’s husband, who had issues with his in-laws, found this an opportunity to bury the past. He got hold of a small carpet and pushed it under Fatima.

After a struggle, as Fatima writhed in pain, Nund tumbled into this world. Fatima, alas, didn’t survive, though they saved the child. At first they thought she was only unconscious. But Fatima died the very moment she called her newborn Nund. Tears flowed from the eyes of every woman present, especially Rahat Maas, who felt guilty about not saving Fatima. As soon as Nund was cut loose from the umbilical cord, he found himself in the arms of Bashir, his father. Bashir’s face turned pale when he saw Fatima. More than just shock, what was imprinted on Bashir’s bearded face was unfathomable sorrow. Everyone was shaken. The men covered Fatima’s body with a cloth sheet and managed to find a woman who could feed Nund. 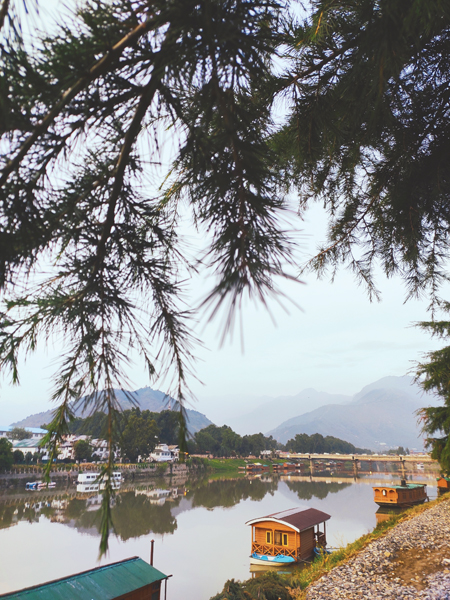 In the meantime, grim-faced uniformed men, who had lost many comrades, ventured into the town with their guns to seek the assailants. The people couldn’t hide for long. In the confusion, Jalal-ud-Din had forgotten to switch off the loudspeaker. Nobody realized it, maybe because the microphone was next to the Mehrab, while they were all sitting away from it. Drawn by the noise coming from the open microphone, the angry soldiers cordoned off the mosque. Nearly every man, young or old, received a beating with rifle butts and sticks. There was another room next to the mosque’s entrance, used for ablutions, and the fuming soldiers used this space as an interrogation chamber.

Seeing Fatima’s covered body, the soldiers didn’t believe it was a dead body. They asked somebody to strip it open, but Bashir didn’t let anyone touch Fatima. Pushing him aside roughly, one soldier decided to check if there was a rebel hiding beneath the covers.

Bashir couldn’t believe it; he didn’t want the hands of kafir to touch his dead wife. He fought back, shouting, “Do not touch my wife.” He appeared like a madman to the others. They pitied him, but did not dare to intervene.

While a few uniformed men pointed their guns at Bashir, the soldier tried to uncover Fatima. Bashir jumped on him and grabbed a knife from his pouch. Before he could hurt the soldier, Bashir was shot, not once but twice. He collapsed on Fatima’s chest, his blood spreading like oil paint. There was silence. Farooq wanted to come forward, but he was stopped and silenced by Masterji. The people saw all this helplessly.

The residents caught in this violence craved to see daylight. It was the darkest and the longest night in the history of Poshmarg. The people, already frightened by the killing of Bashir, were further devastated when they realized the time of morning prayers was long gone. The elders of the town consoled everybody by saying God would forgive them because He watches over everything. Many youngsters were taken to the camp as suspects for further interrogation.

There was grief in the air. After spending the night at home, Bubb and Moji arrived at the mosque. Someone had informed them about the atrocities and the death of their daughter and son-in-law. They were shattered. Moji took Nund in her lap and sat down with Bubb, broken. The elders gave them courage, and the imam declared the deceased as martyrs. Farooq, with a few other men, took hold of the dead bodies and went directly to the special side of the graveyard.

After their burial, the residents rushed back to their houses. Many of the homes had been ransacked.
Masterji was seen lamenting over the fragmented pieces of his prized possession. But the loss of his TV set meant little now.

Muddasir Ramzan, an emerging writer and researcher, received his PhD in English from Aligarh Muslim University, India. His doctoral thesis focused on the contemporary realities of Muslims and recent developments in postcolonialism and Islam. His work has appeared in Journal of Postcolonial Writing, Scrutiny2, Women’s Studies, The Journal of Commonwealth Literature, Himal Southasian, Outlook India, The Hindu, and other publications.