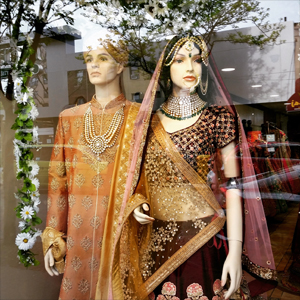 A bitter cold seeps into the night, although only a few people in the streets of the old city seem to feel it. The street-food hawkers, enclosed in their altars of steam, fragrance, and chopped hills of tomatoes, ginger, onion and potatoes, are hard at worship. They register the crowd swimming past them merely as hands—hands which extend to accept their cooked offerings and, before vanishing, present crumpled wads of rupees. Before the night ends, the hawkers will have served hundreds of customers but remember the faces of none.

The bride mannequin will remember the faces, though. She has been watching the people in the streets all morning, noticing each one walk past her and yet ultimately be oblivious of her presence, so deeply engrossed have they been in eating and photographing what they ate. It is only the almost-brides who have paid attention to her, or specifically, the armor of red satin and gold thread she wears—for they too soon will be needing it.

The mannequin’s thoughts drift to the shop upstairs, now a dormitory of slumbering bridal lehengas. The almost-brides have been in the shop the entire day, often running down to the street halfway through the shopping process to console their fraught minds with food. They taste nothing, though, their minds still crazily vacillating between choices they have to make at that very moment: agree as always to what their mother wishes them to wear or already start pleasing their prospective mother-in-law? Should they don a traditional red or pick a more contemporary mint, similar to what their frenemy wore at their wedding a few months ago?

These almost-brides themselves will be married in the coming months, posing alongside their grooms on elaborately decorated stages, their bodies weighed down with dresses, jewelry, mehndi, flowers, and the most onerous of them all: expectations of a happy marriage. They will bear so little resemblance to themselves in these made-up bride avatars that they themselves will struggle to recognize their faces when revisiting their wedding albums months later. When they climb past her en route to the shop, she often yearns to ask the almost-brides why it is that they will choose to look like someone else on the most important day of their lives. But they are too busy weaving dreams to pay attention to a mannequin who wears a bridal dress just for show, let alone hear her questions.

Once the wedding season ends, the bridal lehengas will go into storage and the mannequin will hibernate for several months in a coffin-shaped space on the shop roof. She will fall into a long, dark sleep, occasionally punctuated by dreams in which she is a real bride for once, wearing a fuschia-gold lehenga, standing on a pink-rose enveloped stage. But she will always wake up from those dreams, never having once seen her groom’s face. Who was she getting married to then? Was there even a groom in the first place? She does not dwell much on the answer, though, focusing instead on the reality awaiting her once she wakes up: the sound of monsoon rain, wearing newly stitched and embroidered kurtas, and imploring the crowds to look at her again.

Once the almost-brides become brides, they come to the shop again, accompanying their now almost-bride friends in the capacity of wise married women, dispensing advice about marriage and all its excess and varied baggage. They do not recognize the mannequin but she remembers every one of them. She glimpses their proud, flustered faces, wishing she could ask them if all their dreams have truly been fulfilled. But the new brides are now too preoccupied in reassuring their friends—and perhaps even themselves—to hear more of her questions. They again walk past her, she invisible to them as she has always been.

But tonight the mannequin is not thinking of those brides. She is thinking instead of the woman who had come to the shop earlier this evening, carrying a large transparent plastic case containing a leaf-green wedding lehenga. The sun was setting and yet she still wore huge wrap around sunglasses; her salwar kameez hung off her bones, in danger of falling any moment. The mannequin recalled the woman visiting the shop with her fiancé only a couple of months ago. She had walked along the street, holding his arm and laughing loudly, her lipstick gleaming hibiscus red in the sun. Before they climbed the stairs to the shop, the woman had suddenly kissed her fiancé’s cheekbone, startling his words into silence. How she had giggled at his embarrassment before embracing him, leaving behind lipstick on his shirt pocket.

When the couple passed by the mannequin, the woman stopped to gaze at her before whispering to her fiancé, “Isn’t she the most beautiful mannequin you have ever seen? Look at her cheekbones!”

But today she came alone, her lips colorless, the mouth a sealed letter. She went inside the shop and returned ten minutes later, patently empty-handed, still wearing the sunglasses. However, before she stepped into the street, she removed her sunglasses and paused in front of the mannequin, methodically touching her jewelry, dress, and her cheekbones before bursting into tears. She began running away and even though the mannequin tried hard to keep her in sight, the crowds did not take long to swallow her up.

The mannequin bride will hear the woman’s tears for days to come, haunting her especially at nights when the streets finally fall asleep and she is left alone with only the quarrelling dogs and indifferent, distant stars for company. When she grieves for the woman, she will wonder if she is also not grieving for herself, the always doomed to-be bride with neither a groom nor marriage in sight. What is this miserable, lonely existence she leads, a plastic feeling-less creature masquerading as a woman and yet fooling none?

She will think of that oft-dreamed dream and begin to wonder: was she perhaps marrying herself? The more she thinks about it, the more she realizes that her company is perhaps the only and greatest gift she can give herself, reminding her that she is not alone and never will be. The mannequin fervently wishes she could gift this knowledge to the weeping woman—the only woman who has ever seen her—in hope of assuaging her grief. Or perhaps by now, the mannequin thinks, the woman does know already and her tears are gradually drying up. That thought will warm the mannequin on a particularly wintry night, when the cold pierces even the mannequin’s bones and reminds her that she too is very much alive—and will always be so.

Priyanka Sacheti, now based in Bengaluru, grew up in Oman and has lived in the U.K. and U.S. She has written about the environment, gender, and the arts for international digital and print publications. Her literary work has appeared in anthologies and journals such as Barren, Khora, The Common, Popshot, Lunch Ticket, and Jaggery Lit. Sacheti, who is working on poetry and short story collections, can be found @atlasofallthatisee (Instagram) and @priyankasacheti (Twitter).