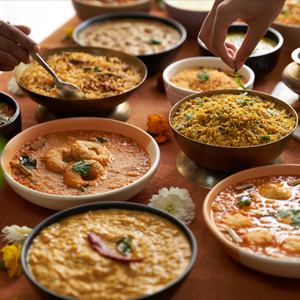 With Indian cuisine becoming mainstream in the U.S., kitchens, grocery markets, and online stores are stocking up on new varieties of instant frozen, canned, and boxed Indian dishes. Over the years, I have tried many of these and have been disappointed with the cardboard stale aromas and chalky flavors. Also, they often contain high amounts of sodium and preservatives, necessary for the shelf life of packaged foods.

But recently, I came across The Cumin Club, a Chicago- based company that offers ready-to-eat Indian food meal plans that arrive at the doorstep in lightweight, room-temperature stored packages. The meals are inspired by different regions and the recipes created by home chefs in India. You can choose to order a quantity of five, 10, or 20 meals to be delivered weekly, every fortnightly, or monthly.

The meals arrive in separate packages that contain liquid, vegetables, and cheese, and require about five minutes of preparation time. You don’t need to chop, grind, or do anything else other than boil water in a microwave, kettle, Instant Pot, or on the stovetop. Simply empty the dehydrated vegetables and curry contents, stir it, and serve.

Like most self-proclaimed chefs, I am always skeptical of Indian fare that is not prepared from scratch after using two dozen ingredients and spending hours laboring in the kitchen. But the dishes I tried from The Cumin Club did not compromise on taste. The paneer butter masala had a nice flavor of tangy tomatoes with the appropriate ratio of sweetness and spice, and the sauce was not too creamy. The paneer pieces were packed separately and tasted soft and fresh once I put the meal together. Malabar veg kurma from Kerala was also a light and appetizing vegetarian dish. The masala poha, with flattened rice, lentils, roasted peanuts, and spices, took only eight inactive minutes to prepare, which is very convenient for a quick and nutritious breakfast before a busy workday. Even a dish I would otherwise consider perishable, the yogurt-based Punjabi kadhi, was available through the meal program and tasted just like homemade.

All the meals came with dehydrated coconut chutney, microwavable papad, as well as fresh leavened rotis that needed to be warmed for only 30 seconds.

I rarely cook Indian sweets at home because they require considerable time and effort. But the moong dal sheera took less than ten minutes to prepare and tasted like I had ground the soaked lentils and simmered them in milk for hours. With chopped cashews and almonds, it made for a delicious and impromptu dessert. 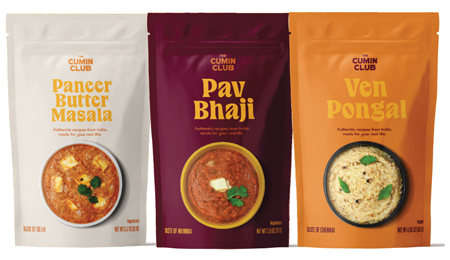 Though the flavors were just like homemade, I thought the portion sizes were small, even for one person. In order to make it a filling meal, you may need two entrées, along with a side of roti or puttu. The best part about the meals was they were protein-rich, preservative- free, and pure vegetarian. Some of them were also labeled vegan, gluten-free, and nut-free to accommodate most diets.

The Cumin Club offers over 40 dishes to choose from including dal chawal, pongal, kichdi, pav bhaji, bisibelebath, bhindi masala, dal makhni, and halwa. Each meal costs less than $5, takes 5-10 minutes to prepare, and has a shelf life of 5-20 weeks (except the rotis that last up to 15 days).

When Coimbatore resident, Ragoth Bala, was studying at The University of Chicago Booth School of Business, he got tired of eating American fast food and wanted flavorful, fresh, and comforting Indian dishes. He co-founded the startup, The Cumin Club, in 2019 along with Harish Visweswaran and Kirubhanandan Rajagopal. The idea was to bring the convenience of meal plans to busy Indian-American households and vegetarians. Unlike other pre-packaged Indian foods in the market, his scientific formula incorporates extracting moisture from high-quality ingredients using a unique food dehydration method, perfecting the proportions and preparations, and packaging in a vacuum seal for freshness. All the dishes have cumin, the ubiquitous spice across Indian cuisines, which was the inspiration behind the name, The Cumin Club.

Though most Indian immigrants, who are purist cooks like me, may not turn to packaged foods for their weeknight dinners, the affordability and convenience offered by The Cumin Club and other such ready-to-go meal plans is often utilized by students, singles, and busy professionals. As an avid traveler, I would also prefer to pack a few of these when I go hiking or camping in remote areas where I need to cook my own meal with limited ingredients and utensils. And there have been a few times during my travels, such as when I was on an African safari in Kenya or was quarantined due to the pandemic at a hotel room in Curacao, when I could have used the instant homestyle Indian food.

The parent company of The Cumin Club has also started a chain of virtual restaurants called The Cumin Bowl which offers soulful and healthy Indian street foods delivered through apps like DoorDash, GrubHub, Uber Eats, and Seamless. They are located in Chicago, New York, Texas, and closer home at UPop, the upscale convenience store by Savi Provisions in Atlanta.