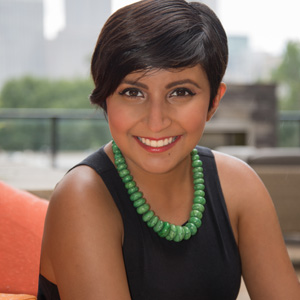 From Nigella Lawson to Masterchef, it seems the world cannot get enough of televised cooking shows. But for some years now, there have been more nimble alternatives on the Internet, offering any ambitious amateur chef the chance to access a vast digital audience. One example is Henna Bakshi, 23, who rustles up quick, flavorsome, and inexpensive dishes aimed at youthful online audiences. Her HLN (Headline News) cooking show is called Around the World in $40. Bakshi’s style is part Rachael Ray with a dash of Padma Lakshmi—and her show inspires millennials to overcome their hesitation to cook at home, even if they’re not on a budget.

Food has always played an important role in Bakshi’s life. She remembers growing up in New Delhi watching her mom and aunties cook fragrant, spicy Indian meals. At the age of 10, the kitchen seemed “mystifying and intimidating”, Bakshi notes, explaining how the process of chopping, spicing, and frying left her in awe. She also recalls how her mother’s passion for cooking extended to beef and pork dishes, even though she was a strict vegetarian. It’s no wonder that Bakshi developed an adventurous palette growing up in an open kitchen environment, a factor that served Bakshi well when her family migrated from New Delhi to the U.S., initially settling in Arizona.

“It was a complete culture shock moving to the U.S. as a teenager,” Bakshi states. Starting school in the ninth grade in a new country, Bakshi found comfort in the bold and hearty American flavors of the dishes being cooked up on TV shows. She embarked on an epicurean journey, experimenting with chocolate chip cookies, waffles, and buttered corn. It wasn’t too long before she realized that her passion for food could translate into earning potential. 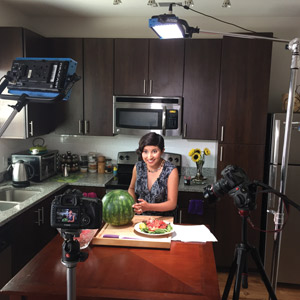 Nowhere is that more apparent than when one walks into the Atlanta studio apartment shared by Bakshi and Andy Leverett, her 25-year-old husband.  Their small kitchen has ​ transformed into a cooking show set. Professional studio lights stand in the corners and the rolling kitchen island is laden with decorative cookware. But it is Bakshi’s infectious enthusiasm that truly lights up the show. After Bakshi picks locally sourced ingredients, she prepares her dishes in the kitchen, as Leverett shoots it all and—later—edits. The filming is done professionally, guaranteed to entice even the most reluctant viewer to the kitchen.

Don’t be deceived by Bakshi’s playful exterior, for within her lies a determination that’s as sharp as––what else?––a chef’s knife. She owes her drive to knowing what she wanted. “I was never the girl that followed the familiar track,” she says firmly. In 2007, after the family moved to Jacksonville, Florida, Bakshi spent the next couple of years developing “her calling” by writing a food column for her high school newspaper. At University of North Florida, as a staff writer for her college newspaper, seeing an opportunity to present food visually, she pitched a show called The Skillet to her professors. Before long, she was hosting the first locally produced high-def UNF cooking show, which even had local commercials. In one segment, she “busts the can’t-cook-in-a-college dorm kitchen myth wide open” by taping a segment there using the only available instruments (a griddle and a microwave) to create a healthy, inexpensive meal.

Her last semester in college was spent interning at CNN; post graduation, this translated into a position as News Assistant in the organization. Around the World in $40 came to be because her prior production experience earned her a coveted spot to pitch in a CNN-only organization. The group, called Inside Pitch, is the brainchild of CNN senior producer Damon Peebles. When Bakshi showed Peebles her past UNF segments, he was struck by “how seasoned and passionate [she was] about her craft,” he said in an email. HLN president Albie Hecht’s office green-lighted six episodes and the camera crew arrived at Bakshi’s apartment. She was initially “very nervous,” but her Sweet Potato Burger recipe was a hit—and the show was launched.

Around the World in $40 airs online on the newly rebranded HLN channel, specifically on the social-media oriented show and website, The Daily Share. You can also access it on her website (www.hennabakshi.com). Bakshi’s show takes the traditional New Delhi recipes she grew up on and gives them a modern twist. It’s happy feasting for all.

Neha Negandhi is a freelance writer and social change organizer based in Atlanta, Georgia. She was the president of Network of Indian Professionals—Seattle chapter, and a co-founder of South Asian Journalists Association—Atlanta chapter.