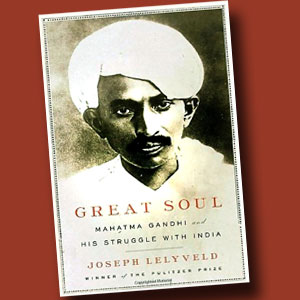 In the “Author’s Note” of Great Soul, Joseph Lelyveld borrows from V. S. Naipaul a description of Mohandas Karamchand Gandhi, the man who would become a mahatma (great soul) to millions: “He became his admirers.”

If the line feels poetic, it is because Naipaul is quoting W. H. Auden, who wrote it in a poem titled In Memory of W. B. Yeats. Auden’s complete line reads: “The current of his feeling failed; he became his admirers.” Since Great Soul paints Gandhi with a wistful sense of tragic failure, Lelyveld’s book would have been better served had the author quoted the first half of Auden’s sentence—the current of his feeling failed.

While most books about Gandhi celebrate an exemplary life, Great Soul is less reverential. Lelyveld, who was a reporter and an editor for the New York Times for nearly four decades, takes an investigative journalist’s ethos in pursuing his subject. It’s as if Lelyveld would like the reader to believe that he is merely an objective broker of the facts; but, of course, no such creature exists.

We all have points of view, and we project them on our subjects. In my Khabar “Satyalogue” column, I always use the respectful “Gandhiji;” Lelyveld uses “Gandhi.”  We’re both referring to the same man, but our sympathies differ. In my selective Q&A, I elect to downplay prurient aspects of Gandhi’s life; Lelyveld gives them seemingly undue prominence. Neither of us can claim neutrality or objectivity.

Gandhi is a Rorschach figure. Where I might see his brahmacharya vow as disciplined celibacy, Lelyveld considers it sublimation and allocates a chapter to what he calls Gandhi’s platonic relationship with Hermann Kallenbach. This misplaced emphasis stains an otherwise valuable book (and has created considerable controversy, including an uncalled for ban on the book in Gujarat and other places in India.). This chapter and repeated references to Kallenbach in subsequent parts of the book perhaps say more about the author’s state of mind than they do about the subject.

Most who write or read about M. K. Gandhi undergo a kind of apperception test: based on the picture in front of us, we interpret his life into a story and project our own worldviews. Lelyveld certainly does this: he tells us what took place in South Africa leading to the subcontinental mahatmahood; he explains what took place in British India leading to independence; and in both South Africa and India, Lelyveld attempts to get inside Gandhi’s psyche to explain what the man was experiencing. Using these elements of narrative, Lelyveld then projects a less than flattering image of Gandhi’s life story.

The first sentence of a chapter titled “Mass Mayhem” reveals Lelyveld’s elegiac feeling:  “By the end of his seventh decade, Mahatma Gandhi had been forced to recognize that the great majority of his supposed followers hadn’t followed him very far when it came to what he’d listed as the four pillars of swaraj.” He closes the opening paragraph with a lawyerly use of Gandhi’s own words to indict the Mahatma on account of failed leadership: “It would be his lot ‘to plough a lonely furrow,’ for it seemed he had ‘no co-sharer in the out-and-out belief in nonviolence.’”

In terms of the four pillars—nonviolence, village-based cottage industries, Hindu-Muslim unity, and the end of untouchability—Lelyveld suggests that although Gandhi practiced what he preached, his words and actions fell on deaf ears. “If … his life was his message, his death was a message that the Indian state now had license to reinterpret its meaning to suit its immediate requirements.”

Using limited followership as evidence, Great Soul calls into question Gandhi’s stature as a transformational leader—while the man was transformed through a series of turning points in his life, the glow of his leadership mettle is diminished because ostensibly neither India nor South Africa was transformed as a result of him. Of course, this sort of damning praise can be applied to other historical figures: Abraham Lincoln saved the United States but was ineffective because it took another century for African-Americans to be afforded civil rights; Mother Teresa cared for the poor but achieved little because leprosy has not been eradicated from Kolkata; Nelson Mandela may have been an anti-apartheid activist, but AIDS is rampant in South Africa; and though Jesus espoused Christian values, pedophiles seek refuge behind the heavy walls of the Catholic Church.

In writing Great Soul, Lelyveld retraces Gandhi’s life work in South Africa and India, to take a balanced approach to his protean subject: “sage, spokesman, pamphleteer, petitioner, agitator, seer, pilgrim, dietitian, nurse, and scold.” In doing this type of humanizing reportage, Lelyveld does a service to the reader who wants to know more about M. K. Gandhi the self-proclaimed flawed man. However, the shadow side of this approach is that it undermines him as a transformational leader.

Gandhi’s commitment to a transparent life, as exemplified by his autobiography’s subtitle, “My Experiments with Truth,” opened him to criticism. For Lelyveld, who is so-inclined, there is ample evidence in Gandhi’s own writing of his very human fallibilities. But dwelling on those experiences and experiments hides the greater truth of Gandhi’s unmatched courage, conviction, and selflessness. By holding fast to the truth, Gandhi honed his theory of satyagraha into a lifelong form of action research.

For those who blindly admire the Mahatma, Gandhi is encrusted in myth and legend; some of these admirers may want to freeze their saintly hero’s memory with this line from Auden’s poem: “The day of his death was a dark cold day.” But, as amplified in Great Soul, the reality is more complicated than saintliness. It is also more hopeful than death. Gandhi’s life gives hope to all who embrace his saying: “be the change you wish to see in the world.”  Like the sound of Om reverberating from a distant cave, Gandhian love, optimism, fearlessness, empathy, freedom, and truth continue to echo. Like Auden’s closing stanza, Gandhi continues to inspire:

In the deserts of the heart
Let the healing fountain start,
In the prison of his days
Teach the free man how to praise.

[Dr. Rajesh C. Oza, who is a change leadership consultant and Khabar's "Satyalogue" columnist, wrote this review in part because his son, Siddhartha, is graduating from Stanford University into a world requiring transformational leadership.]