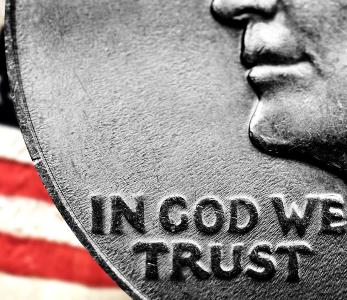 A look at religion in the U.S., from the righteous views of the Puritans to the heartfelt and inclusive words of President Bush right after 9/11, and our dazzling freedom to worship as we please.

“The World Trade Center has been struck by a plane,” the Delta pilot tells us, and that is all we know until we land at the Cincinnati airport. Once we exit the plane and enter the concourse, we stare at the televisions and watch as planes from hell kill innocent civilians. I call the elementary school and tell my daughter, Molly, not to worry, for she knew I was flying that day. I call my wife, parents and a few friends, then rent a car and drive home.

On Sunday, September 16th, 2001, I attend service at a local Presbyterian Church. The minister asks us to please stand and sing our opening hymn, the “Battle Hymn of the Republic.”

Mine eyes have seen the glory of the coming of the Lord;
He is trampling out the vintage where the grapes of wrath are stored;
He hath loosed the fateful lightning of His terrible swift sword:
His truth is marching on.

The militaristic and righteous nature of the iconic hymn that was written during the days of the Civil War has an ordinary American red-headed kid who was raised to believe that our Christian God is the one true God and that our country is uniquely blessed by our God, ready to find and shoot the bastards responsible for the death of so many people.

The Puritans—our country’s first colonists and very conservative Christians—would have joined that fight. Our President at the time of the 2001 attack, George W. Bush, himself a very conservative Christian, eventually took action. But on September 14th, 2001, President Bush also said a few things at the Washington National Cathedral that would have staggered the minds of the Puritans, and, in all likelihood, caused them to expel him from their Christian colony. This is the story of how our dazzling country—and how else to describe a land where we are free to work, worship, and speak—has transitioned from the righteous views of the Puritans to the heartfelt and inclusive words of President Bush. We will begin our narrative in ancient Egypt.

We see an abandoned baby floating on a raft that has been hidden among the reeds. The Bible tells us that the baby is Moses, and that his mother, a Jew, left him there in the hopes a kind person might save him. Earlier passages had told us that the Pharaoh had ordered the death of all newly born Jews. Eventually, Moses is mistakenly adopted by an Egyptian royal family. When he reaches adulthood, his true racial and religious identity is revealed when God orders him to revolt against the Pharaohs by first freeing the enslaved Jews, and then by leading them out of Egypt toward the Promised Land.

Thousands of year later, the Puritans, so named because they wished to “purify” the Church of England by having that body return to the exact and literal words of the Bible, believed that their own lives represented a reenactment of this Biblical story. As God had allowed Moses and the Jews to leave Egypt and head toward the Promised Land, He had allowed the Puritans to escape England and head toward the New World. Like Moses, they were to create a sacred colony of fellow believers. John Winthrop, the Governor of the Massachusetts Bay Colony, said so when he addressed the colonists before they disembarked in the New World:

We will be as a city upon a hill. The eyes of all people are upon us, so that if we deal falsely with our God in this work we have undertaken and so cause Him to withdraw His present help from us, we shall be made a story and a byword throughout the world.

The words, “city upon a hill,” are Biblical. When Jesus delivered his Sermon on the Mount, he said:

“You are the light of the world. A city set on a hill cannot be hidden. Nor do people light a lamp and put it under a basket, but on a stand, and it gives light to all in the house.

These sent-by-God-so-we-cannot-be-questioned-Puritans populated much of New England, beginning in the 1620s. Those who disagreed with their biblical interpretations could be exiled from the colony. Famously, the first to go was Anne Hutchinson. She had the audacity to claim that God had spoken to her directly, a possibility not detailed in the Bible, and a possibility that also threatened their rigid control. In 1692, concerned about reports of demonic possession, the Puritans initiated the Salem Witch trials. Eventually, they executed twenty people and two dogs for being agents of the devil.

The Puritans eventually lost their power as other colonies formed, including one founded by a Puritan exile, Roger Williams. In 1636, Williams purchased land from the Indians and eventually founded Providence, Rhode Island. The royal charter that he gained for the colony is famous: for the first time in American history we see a separation of church and state:

No person within the said colony, at any time hereafter, shall be anywise molested, punished, disquieted, or called in question for any differences in opinion in matters of religion ... but that all persons may ... enjoy their own judgments and consciences in matters of religious concernments.

We will take our leave of the Puritans, but not without acknowledging their legacy. Due in part to these faithful people, America is still considered one of the most religious countries in the world. We cannot attribute the full weight of “American Exceptionalism” to the Puritans, but we can assume that the belief a nation has been blessed by God is powerful fodder for those in politics. Presidents Kennedy and Reagan (famously, many times) both referred to the Puritans’ “City on the Hill,” as has President Obama.

Enough of the dreadful Puritans. It’s time for a pop quiz.

In what American city can we find the second oldest, continuously operating, Jewish synagogue? Hint. It is not our more “liberal cities,” places such as New York City, Boston, or Philadelphia. 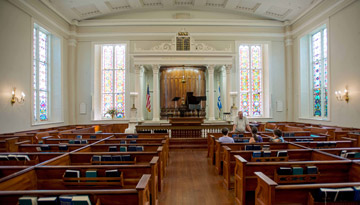 Two places of worship in Charleston, South Carolina that are on the National Historic Register: the Kahal Kadosh Beth Elohim synagogue (left, 1740) ...

The answer is Charleston, South Carolina. The Kahal Kadosh Beth Elohim synagogue was founded in 1740. How could this be, you ask? Why, the South is full of bible-thumping conservative Christians, some of whom believe that the Jews killed Jesus Christ. Why did the Jews, beginning in the late seventeenth century, settle in Charleston? 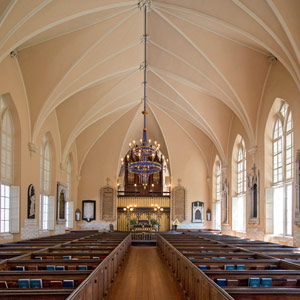 ... and (also on the National Historic Register) the French Huguenot Church (left, whose congregation is traced back to the 1680s).

In 1663, the British, concerned that no one of sound mind would settle in the swampy, malaria-infested area of the Carolinas, and sensing that a buck or two could be extracted from their holdings, allowed freedom of religion to anyone who did. People of all faiths and from many different countries moved to Charleston to enjoy this incredible freedom. Long suffering Jews migrated, as did the Quakers, as did the French Huguenots. In the same era that the Puritans were executing twenty people and two dogs, the people of the Carolinas, thanks to the profit-seeking English Lord Proprietors, were creating a much more contemporary City on a Hill.

In 1789, shortly after the Revolutionary War, our religious liberties were assured and defined in the First Amendment to the Constitution:

Congress shall make no law respecting an establishment of religion, or prohibiting the free exercise thereof; or abridging the freedom of speech, or of the press, or the right of the people peaceably to assemble, and to petition the Government for a redress of grievances.

In 1954, the year I was born, and for much of my childhood, the threat to America was cold, bloodless, godless Communism. “Our nation must return to God,” the then young Christian evangelist Billy Graham thundered to filled stadiums, but when the “do your own thing” 1960s arrived, such absolute views, the stuff of my teenage years, fell out of favor. I had to decide what I believed, and then select from our religious marketplace a proper venue for my spiritual study.

How blessed are we to have such options?

On September 14th, 2001, a service was held at Washington National Cathedral. President Bush shared the pulpit with an imam, an archbishop, a priest, and a rabbi. He spoke about our need to respect Islam, quoted verses from the Koran, told of the contributions Muslims have made to our incredible country.

I did not hear such graceful words on that not so distant day.

Instead, at our small suburban church we sang the militaristic “Battle Hymn of the Republic,” a reminder to me that it is not always easy to separate God and country.