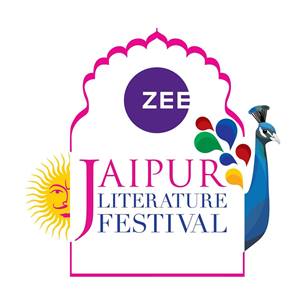 The allure of Koh-i-Noor,
Shashi Tharoor,
and more—
when Jaipur Literature Festival
came to the Big Apple. 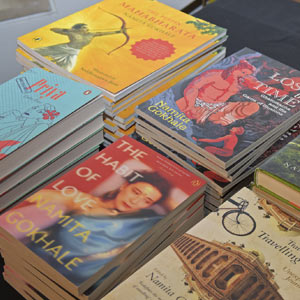 We all grow up, but we never outgrow our need, our hunger for stories. The human race survives and thrives on stories, on tales of hope, valor, and the human spirit; tales of love and loss; tales of fixing broken hearts and broken worlds. In this endeavor to find ourselves and our disappearing worlds in words, the Jaipur Literature Festival (JLF) has been a great force, creating a sanctuary of books and book lovers. And now this traveling cavalcade, this caravan of writers, performers, and artists, of philosophers and dreamers, has come to America.

In September, Sanjoy K. Roy and Teamwork Arts, producers of the ZEE Jaipur Literature Festival, brought JLF to New York, with noted names like William Dalrymple, Ambassador Navtej Sarna and Shashi Tharoor as well as voices of the next generation like Kanishk Tharoor, Preti Taneja, and Kayhan Irani. The event was hosted by Asia Society at its Park Avenue location in collaboration with the Consulate General of India and the South Asia Institute at Columbia University.

Sufi singer Zila Khan sets the tone
The afternoon began with a lovely invocation by the noted Sufi singer Zila Khan. The daughter of sitar maestro Ustad Vilayat Khan, Zila is a fine Sufi singer whose lyrics and earthy voice made 25 minutes pass in the blink of an eye as the audience listened to her, mesmerized. In a spiritual ode to Jhoole Lal, revered both in Hinduism and Sufism, she played upon the word lal (red) until it infiltrated the material and spiritual worlds—gulab lal, chunri lal, suhag lal—and everything merged into ‘Lal’—the Supreme, the Creator. In a joyous embrace of different faiths, she then segued into a classic Hindu hymn to Sri Ramachandra— “Thumak Chalat Ramchandra”—then again back to “Jhoole Lal” and “Mast Kalandar.” It was a tour de force that conveyed an essential truth, that all faiths are cut of the same cloth.

After Zila Khan’s stunning, surreal invocation, it was back to the tangible world of human matters. A series of intriguing panel discussions filled the afternoon with thoughtful speakers, many of whom spoke about the subjects of their latest books, spanning a breathtaking range from magnificent diamonds, wars, and medical breakthroughs to art, religion, and lost languages.

The allure of Koh-i-Noor
The discussions started with the Koh-i-Noor diamond, and the audience was in their favorite ‘tell me a story’ mode. After all, what could be more opulent and alluring than the fabulous Kohinoor Diamond, the much lusted for and storied gem that now sits in the Tower of London?

The panelists were three experts who ought to know a thing or two about the Koh-i-Noor and its checkered history: William Dalrymple, Navtej Sarna, and Navina Najat Haidar. While celebrated India-based history writer William Dalrymple has co-authored a book, Koh-i-noor with Anita Anand, Indian ambassador Navtej Sarna has written The Exile: A Novel Based on the Life of Maharaja Duleep Singh, a novel about the younger son of the Maharaja Ranjit Singh of Punjab, who signed away the rights to Kohinoor to Queen Victoria when he was only 11. Navina Najat Haidar, who moderated the discussion, is a curator of Islamic Art at the Metropolitan Museum of Art, and has organized many exhibitions including “Opulence and Fantasy: Sultans of Deccan India,” which showcased the fabulous Golconda diamonds. 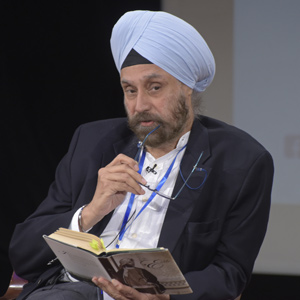 (Right) Ambassador Navtej Sarna reading from The Exile: A Novel Based on Life of Maharaja Duleep Singh. (Photo: Elsa Ruiz)

Sarna described how the young Duleep Singh had a chance to hold the Kohinoor for a final time in his hand again in the Tower of London before he formally handed it over to Queen Victoria, his sovereign. Sarna told the audience: “When she becomes a widow, that’s the only thing she wore on her black dress to the opening of the Parliament. It went from crown to crown. The present queen has not worn it. Her mother wore it. It is still in the Queen Mother’s crown and you can still see it on your next trip to London.”

Sandip Jauhar to Shakespeare: from the anatomical heart to matters of the heart
Sanjoy Roy had an insightful discussion with Dr. Sandeep Jauhar, Director of the Heart Failure Program at Long Island Jewish Medical Center. Jauhar is the author of Doctored: The Disillusionment of an American Physician and Intern: A Doctor’s Initiation, and his newest book is Heart: A History. Often a passion to a cause starts at an early age and linked to a family tragedy. Jauhar revealed he had lost his grandfather in childhood to heart disease.

From the anatomical heart, the program segued to matters of the heart with Shakespeare. Gauri Viswanathan, Professor in the Humanities and Director of the South Asia Institute at Columbia University and the author of Masks of Conquest: Literary Study and British Rule in India, moderated an intriguing discussion between James Shapiro, Shakespeare scholar and author of The Year of Lear: Shakespeare in 1606 and Preti Taneja, author of We That Are Young, which transports King Lear to the chaos of contemporary India.

“It is probably not an exaggeration to say that Shakespeare’s enduring presence is as marked in India as any other country, including England,” said Viswanathan. “Reworked and translated into numerous Indian languages and adaptations ranging from films to novels, Shakespeare’s plays continue to speak to the Indian imagination and provide a lens to interpret India’s contemporary social and political roles.”

Preti Taneja’s debut novel, We That Are Young, is a modern take on King Lear, which offers a searing retelling from the perspective of Lear’s daughters: a tale of inheritance, corporate power, and rampant corruption in modern India.

So what made Preti take on Shakespeare and remake King Lear? “For me King Lear is a puzzle and I haven’t solved it in any way,” Taneja told the audience. “It’s obsessed me since I was 17. It was the first time in the classroom that I have really seen a Partition narrative in which women are the kind of pawns in the game, and everything to do with female honor and shame was expressed in the classroom, and I could suddenly see an extended Indian family which really didn’t have room in the classroom in the UK where I grew up. The idea was very exciting to me and [it] never just went away, [the] sense of it in the world where I was growing up.”

Taneja mentioned that she has been in ​touch with Vishal Bhardwaj, the Bollywood director who has given us masterful desi adaptions of Macbeth, Othello, and Hamlet and who is now working on Twelfth Night.

New York: The city that speaks 800 languages
Perhaps the discussion which touched all New Yorkers and anyone with a global outlook was “New York, the City of Many Tongues”—a discussion about languages by Kanishk Tharoor who is the author of a collection of short stories, Swimmer Among the Stars, which won the Tata First Book Award for Fiction and was the Guardian’s and NPR’s Best Book of the Year. Along with him was a totally eclectic group—diverse people with diverse backgrounds. Syrian-American writer Alia Malek, Indian Parsi writer Kayhan Irani, activist Ruchira Gupta, and Ross Perlin who is co-director of The Endangered Language Alliance and author of Intern Nation: How to Earn Nothing and Learn Little in the Brave New Economy.

Indeed, New York is a metropolis of many voices and has been described as ‘the capital of language density.’ In a freewheeling discussion, these writers took on issues of the 800 languages spoken in New York, including the ones which have been lost in their home countries and are yet spoken here.

Kayhan Irani, who is an Emmy award winning writer and a cultural activist with a one-woman show, There Is a Portal, spoke poignantly about the loss of her language, comparing it to a distant ship which is slowly disappearing, a speck on the ocean. The power of language as a keeper of identity and selfhood was palpable in this discussion that provoked a lively audience interaction. 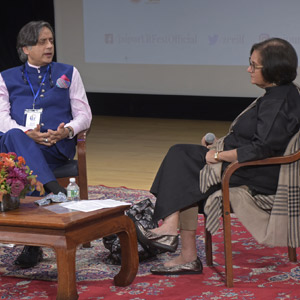 Renaissance man Shashi Tharoor
The day was punctuated with plenty of coffee breaks and quick chats with authors as they signed books for their fans. The final panel was a conversation with Shashi Tharoor, colorful politician and bestselling author of 16 works of fiction and nonfiction revolving around India and its history, culture, religion, and foreign policy. He spoke of the aftermath of colonialism and empire on today’s India, education, and his interpretation of being Hindu.

Answering questions from the audience, Tharoor said, “The British saddled us with their touching belief in bureaucracy. Colonialism rested on the assumption that anything resulting from the filling of forms in quadruple would solve injustice. So process is far more important in our government systems than outcomes.”

Yet he was optimistic that Indians would triumph over red tape. “But I feel we’ll get there and gradually we’ll strip away the situation. You can’t do it overnight, and you certainly can’t do it when you haven’t had a revolution really, you’ve had an evolution—you’ve taken over the colonial state and have very gradually begun to change it into something different. That has taken a while but change is coming.”

The grand finale was a reception at Asia Society where the JLF audience got to rub shoulders with the authors, have a glass of wine, and take the mandatory selfies with celebrities. Although this festival was a half-day event, it was a provocative tasting menu of things to come, and hopefully JLF will become a regular annual feast of ideas in New York.