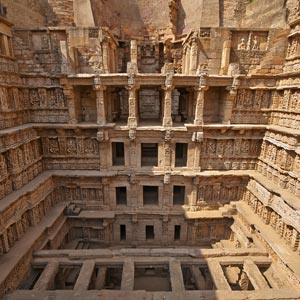 Strikingly beautiful, mystical, and strangely, quite unknown to the world at large, the STEPWELLS OF INDIA are a rich repository of history, social customs, and legend.

The world abounds with great examples of architecture, such as the Taj Mahal and the famed Notre Dame Cathedral of Paris—most of which are built above the ground. What about the treasures that have been built below ground but are equally majestic in their history, legacy, and architecture? The incredible but little known stepwells of India are precisely such treasures which the world seems to be waking up to. UNESCO has only recently recognized a few of these marvels as World Heritage Sites.

Sunken or subterranean buildings are not limited to India. The world-famous Lascaux caves in southwestern France are home to astonishing lifelike paintings that date back some 18,000 years. An ageless network of natural subterranean wells, called cenotes (pronounced sih-‘no-tee), located in the Yucatan peninsula of Mexico, was used as the only source of fresh water. In ancient Egypt, an elaborate and extensive network of tunnels and chambers was dug out of hills on the east bank of the Nile to bury the pharaohs. Beginning around the first century A.D., extensive networks of tunnels and chambers known as catacombs were built outside the city walls of Rome and other cities of the Roman Empire. These provided hiding places for the early Christians, who also buried their dead there. Again, to hide from a new wave of religious persecution, during the seventh and eighth centuries B.C., Christians built elaborate underground cities, some eleven floors deep and housing as many as 20,000 people, in the Cappadocia region of today’s Turkey.

What differentiates these subterranean structures from the stepwells of India is the fact that none of them were built as “architecture in the reverse” and none as a container of water for significant public uses.

The Great Bath of Mohenjo-Daro
The history of the stepwells of India goes back to 2600 B.C., with the Great Bath in the ancient city of Mohenjo-Daro situated in today’s Pakistan. This was unique in the ancient world. At 12 meters by 7 meters, the Great Bath is quite modest in size compared to some of the other more striking, deeper, and larger stepwells of India. However, considering it is quite larger than the smaller wells built in each sector of this most advanced city of those days, the Great Bath was quite obviously a place for important social and religious events.

The tradition of stepwells continued in India in the second century A.D., and through the nineteenth century A.D., into the arid northwestern regions of the country, where, but for the brief monsoon rainy season, water was scarce.

There are hundreds of these gems scattered across India, but most of them in the western and northern regions. The most notable ones other than those cited in this article are Chand Baori (Rajasthan), Agrasen ki Baoli (New Delhi), and Hampi stepwells (Karnataka). Many others are mostly unsung. Sadly, many of them have already crumbled into heaps of masonry and dust. Several, though, are being protected under the umbrella of the Archaeological Survey of India. Perhaps these actions will bring due attention to these remarkable works of architecture and engineering, and help preserve them before they disappear into oblivion.

Of the different types of stepwells, the most spectacular ones are open to the sky and adjoin a temple. Others are accessed by many flights of staircases, which are mostly covered and house temples within the body of the sheltering structures.

The stepwells served as places for collecting water for various purposes including irrigation, performing sacred rituals, celebrating festivals, social gatherings, and even as a resting place for travelers. The covered ones also provided much-needed shelter from the sun. 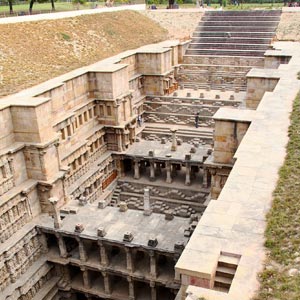 Rani-ki-Vav, a UNESCO World Heritage Site, is one of the most spectacular of sunken architectural treasures of India and draws connoisseurs of art, architecture, heritage, and photographers in droves. (Photo: Arun Bhargava)

Rani-ki-Vav – Queen Udayamati’s Tribute
The Rani-ki-Vav (“Queen’s stepwell”) in Patan, Gujarat, was declared a World Heritage Site as recently as 2014. It has an unusual and touching history as it was built about 1000 years ago, on the banks of the Saraswati River, by Udayamati, the widowed queen, in memory of her husband King Bhimdev.

Three centuries later, a dramatic geotectonic upheaval caused massive floods in the area, and the disappearance of the River Saraswati. The silt carried by the flood buried the queen’s beloved well. Rani-ki-Vav was discovered and excavated a mere 35 years ago. Ironically, having been buried for centuries, the stepwell was preserved in immaculate condition.

The interior faces of Rani-ki-Vav were adorned with some 500 major sculptures on its four levels, which reached a depth of 30 meters, with its overall size being 64 x 20 meters. Its orientation is east-west, with the entrance from the east or the direction of the rising sun. One can easily visualize the majestic and mystic beauty of the interior under the changing positions of the sun, or when light from lamps shone on the sculpted walls, columns, and ceilings and of the very large open expanse of the entrance area. 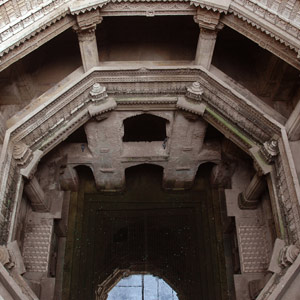 Adalaj Stepwell: stunning sights no matter where you look: up, down or sideways! (Photo: Prashant Vaidya)

Adalaj Stepwell – The Legend of Rani Rudabai
Another very well-known stepwell is the Adalaj Stepwell near the city of Ahmedabad. It also reaches water at 30 meters and its main hall measures some 1000 square meters. The well steps down five stories and is covered for all but the topmost floor. It has temples and several hundred sculptures featuring many deities, dancers, musicians, and sacred animals, particularly elephants, on the successive levels. Unlike Rani-ki-Vav, it exhibits the influence of both, Hindu and Islamic architecture as a result of its legendary history.

The construction of the Adalaj Stepwell was commissioned in 1500 A.D. by King Rana Veer Singh. He died in a battle with the neighboring king, Mohammed Begda, who proposed to marry the Rana’s widowed queen of exceptional beauty, Rani Rudabai. The story goes that the grieving queen agreed to marry the conqueror on condition that he complete the construction of the well. But after the completion of the well, the queen, instead of marrying Mahmud Begda, prayed around the well and jumped into it, ending her life. 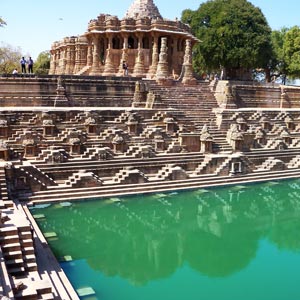 Surya Kund, and the accompanying Sun Temple, another World Heritage Site, make for stunning vistas as an open-air stepwell featuring steps in a dizzying but rhythmic pattern, reminiscent of the mathematically inspired art of M. C. Escher. (Photo: A. N. “Shen” Sengupta)

Surya Kund – Well of the Sun God
The Surya Kund in Modhera (Gujarat) must rank as the jewel among India’s stepwells and as one of the world’s finest works of architecture. Yet, for all practical purposes, it lies unsung, its stunning beauty unknown to all but the most discerning of travelers. Fortunately, this stepwell, along with the adjoining Sun Temple, is now a World Heritage Site, albeit only in 2014. It is maintained by the Archaeological Survey of India.

King Bhimdev, in whose memory Rani-ki-Vav was built, and who belonged to a Sun Dynasty, built the Sun Temple and the adjoining Surya Kund in 1026 A.D.

The Surya Kund was used for ceremonial ablutions before entering the temple. It stretches north-south 53.6 meters x 36.6 meters and very closely approximates the “golden ratio” (1:1.61), which is considered aesthetically pleasing, and appears abundantly in nature.

Today, only the columns remain of what once used to be a gate allowing entry to the temple. Five levels of stairs lead down to the water. Between every two levels there are steps in a dizzying but rhythmic pattern, reminiscent of the mathematically inspired art of M. C. Escher. The 108 miniature shrines that punctuate the staircases, it seems, serve as much to allow devotees to worship as to combat the dizziness one experiences while ascending or descending the stairs. There is an incredible vibrancy about the Surya Kund’s architectural composition that barely allows the eyes to rest on a particular point without the gaze being compelled to wander in other directions! Is there anything in the world which can compare with such a masterful creation “in the reverse”?

Born in pre-Independence India, and currently a resident of metro Atlanta, A. N. “Shen” Sengupta is an architect and planner who has designed about 200 projects in the U.S. and worldwide. He is the author of two self-published books through Amazon: Stranger in Shangri-La and The Road to a Liveable World.