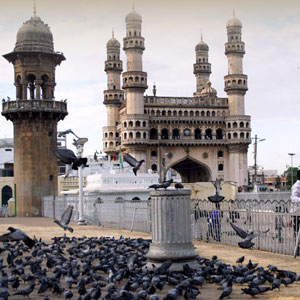 Left: The Charminar in Hyderabad.

The area around the Charminar in Hyderabad is a delight for the foodie, shopper, and history buff.

Hyderabad, the capital of the state of Andhra Pradesh, is the city of nizams, mosques and palaces. Built in 1590, it is one of the earliest planned cities in India. The Charminar, an ornate structure with four towers, is its focal point.

Recently, I took a walking tour of the city’s bustling bazaars and alleys. My journey took me to some old buildings, crowded cafes, and colorfully stocked shops, which continue to breathe life into the centuries-old history and culture of this place.

My starting point: the Charminar. Built in 1591 by Sultan Muhammad Quli Qutub Shah, then ruler of the region, it is located on the east bank of the Musi river. The ancient clock just above one of its arches shows 8 am. The businesses are yet to open. But the Farasha Cafe, in the shadow of the minarets, is already crowded with the teaholics. All I can hear as I sit sipping my morning tea is the occasional sound of the bells from the Hindu temple nearby. The cafe is one of the oldest eating joints in the city and serves the best Irani tea. Hyderabad is as famous for its Irani tea as it is for its biryani (a dish of rice, meats and spices).

The muezzin can be heard calling the faithful to prayer from the Makkah Masjid nearby. I follow the direction of the sound and enter the masjid’s sprawling courtyard. The city has dozens of mosques, but the Makkah Masjid is the most important. It is believed that the merit of prayers said here match the spiritual benefits of a pilgrimage to Mecca. The mosque gets its name from the fact that the sultan commissioned bricks to be made from soil brought from Mecca and used them to construct the central arch of the structure. The three arches that make up the mosque’s facade have been carved from a single piece of granite, which took five years to quarry.

This part of Hyderabad is a foodie’s paradise. Pista House on Shah Ali Banda road is an excellent place to gorge on a Hyderabadi specialty, haleem (a stew made of meat, pounded wheat, spices, and clarified butter). For biryani, head to Hotel Shadab and Madina, not far from the Charminar. During the month of Ramazan, the area comes alive in the evening, with food stalls mushrooming to cater to those looking to break their fast and offer prayers at the nearby mosques.

It is believed that Hyderabad gets its name from Hyder Mahal, a beloved of Quli Qutub Shah. Hyder Mahal was a title bestowed on Bhagmati, a Hindu peasant girl whom Quli married. He built Hyderabad around the village of her birth, Chechlam. Legend has it that Qutub Shah built a secret tunnel, the location of which is still unknown, connecting the fortress city of Golkonda with the Charminar. 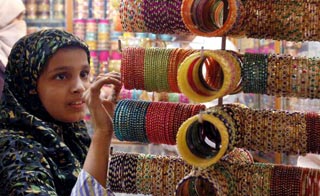 A girl checks out some bangles at a shop in Lad Bazaar.

The area is also the centre of Hyderabad’s bangle industry. Traditional Hyderabadi bangles, or goots, made of lacquer and studded with pieces of glass in a myriad of different designs and a thousand bewitching colors adorn the shops in Lad Bazaar. Look hard and you may spot an antique from the age of the nawabs. Antiques and local handicrafts are worth taking home. 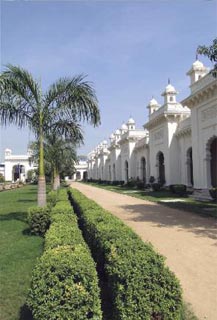 A short walk from Lad Bazaar takes me to the official residence of the former nizams of Hyderabad, known as the Chowmahalla Palace, built around the early 1800s. Chowmahalla is said to resemble the Shah of Iran’s palace in Tehran. The lavishness of its interior décor reflects the exotic and extravagant tastes of the Asif Jah monarchy that ruled Hyderabad state for around 200 years up until Independence in 1947. 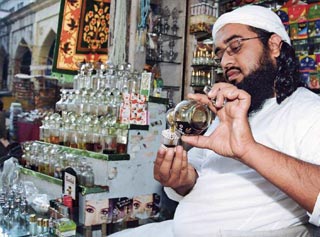 My journey will end at Madina Hotel. But before I call it a day I nip into a shop selling attar (perfumes). The shelves are lined with tiny glass bottles filled with alcohol-free, natural, oil-based fragrances. Floral attars are very popular; it is said that the favorite of the nizams was jasmine attar.

Hyderabad is known as the City of Pearls for good reason. On my way home, I walk past shops around Gulzar Hauz; each one of them has a king’s ransom worth of pearls in all shapes, sizes and colors. I long to stop, but I guess this pleasure will have to wait for my next visit.