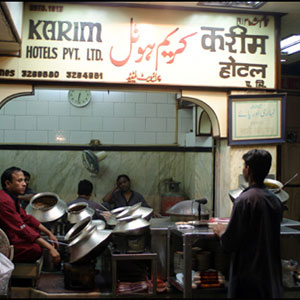 Karim serves a great breakfast offering paye (trotters) and piping hot tandoori roti and it has been my practice to enjoy this breakfast whenever I visit Jama Masjid in the historic walled city of Shahjehanabad which is commonly known as the old city.

My problem is that I hate to eat my breakfast alone in the old city so I called my childhood friend, Naseem, to join me. Naseem lives in the area and the two of us ate our breakfast and reminisced about the happy days of our childhood in the walled city. We would travel in the tongas to the ruins of Mehrauli on the southern outskirts 12 miles from the old city for a picnic. It was a custom with the people living in the old city to hold picnics in the monsoon season and eat mangoes by the dozen. In the old days there were no buses or cars, only tongas for families to go to Mehrauli and the Qutub Minar from the old city. And in the monsoon season sometimes the road would be full of tongas racing each other to Mehrauli. 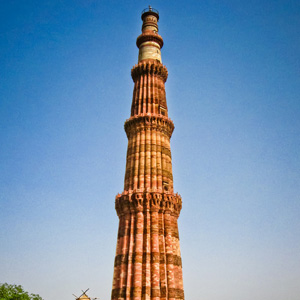 I told Naseem that I was going to see Masroor in Ballimaran where the great Urdu poet Ghalib lived in the 19th century. Masroor is the grandson of Hakim Ajmal Khan whose ancestral home Aftab Manzil used to be the hub of activities of nationalist leaders such as Jawaharlal Nehru (India’s first prime minister) during the freedom struggle. Masroor has inherited his grandfather’s library on India’s Mughal history. I wanted to borrow a rare English-Hindustani dictionary compiled by Duncan Forbes in 1867. 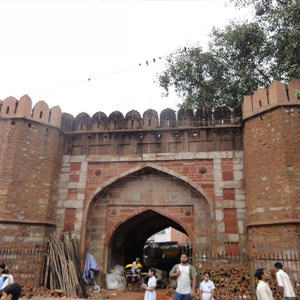 When I go to Shahjehanabad or Old Delhi, I park my car near Turkman Gate and walk to Jama Masjid. Sometimes I go via Bazar Sitaram and Gali Prem Narain or via Mohalla Kabristan and Chitli Qabar. Let me tell you that all the places I have mentioned have an interesting history. Turkman Gate is remembered historically because a great Sufi Saint Shah Bayabani used to live in this area during the reign of Razia Sultan in the 12th century. Razia’s grave is situated just half a kilometer away north of Turkman Gate. The Gate was constructed  much later when the Mughal Emperor Shah Jahan built Old Delhi as his capital in 1638 A.D. During Razia’s reign this area was a thick jungle and was a favorite hunting ground of the royal families of that era. The Tughlaks also continued to hunt in this area and even erected a mosque known as Kali Masjid. The Masjid is close to Bazar Sitaram where Kamla Nehru lived and where Pandit Nehru came with his barat to marry her. The haveli where Kamla Nehru’s family lived still exists.

In fact, Bazar Sitaram is named after an enterprising Kashmiri Brahmin who rose to a high position in the Mughal Darbar during the reign of Shah Alam. Bazar Sitaram gradually became a colony of influential Kashmiri families who found gainful employment during the period of later Mughal kings. Gali Prem Narain in Bazar Sitaram was famous for grand havelis of Kashmiri nobles. Some of these old havelis still exist here. 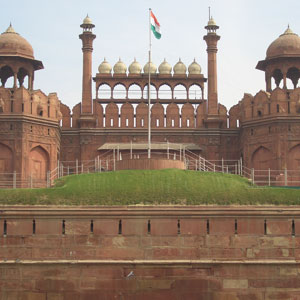 The River Yamuna once flowed through Ballimaran and Turkman Gate areas long before the Mughals chose Old Delhi as their capital. When Shah Jahan came to live in the Red Fort in Delhi, the Yamuna had changed its course and was on the eastern side of the royal palace. It has now further receded to the east. 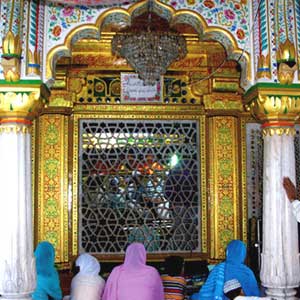 The Dargah of Hazrat Nizamuddin.

There are a number of historical places for which Delhi is famous such as the Qutub complex, the Hauz Khas, the Dargah of Hazrat Nizamuddin and, of course, New Delhi. But Old Delhi in spite of it being crowded, with noisy dirty narrow lanes has an old world charm. It has color and a unique character of its own. 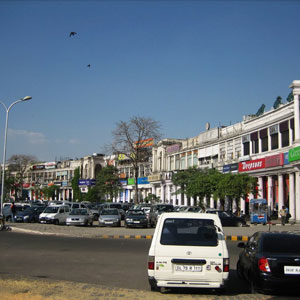 I once took a walk from the India International Centre to Connaught Place. I enjoyed the tree lined avenues and the pavements on Janpath, but apart from bungalows and beautiful roundabouts, there was little else to savor. The only buildings worth a mention on the way were Jinnah’s former home, the National Museum, and India Gate. 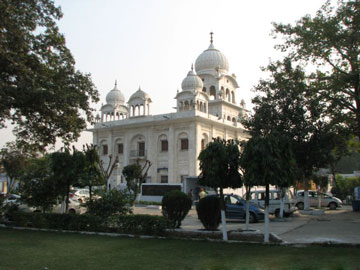 In contrast just take a walk from Barakhamba Road to Turkman Gate, a distance of only a kilometer and a half and you will come across several historical sites. The sixth Guru Harkrishan Singh and his mother Mata Sundari founded the famous Gurudwara Mata Sundari (photo below left). The grave of Maulana Waliullah is close by just behind Maulana Abdul Kalam Azad Medical College. There are a number of other prominent leaders buried in this famous graveyard and almost adjacent to it is the site where the first modern jail was set up before the first war of independence in 1857. Avadh Behari and two of his associates were hanged there for staging a bomb attack against Lord Hardinge. A number of prominent Muslim elites who were convicted for their participation in the first war of independence were also executed in the old jail. The jail was shifted to Tihar after India became independent in 1947. Then there is a site where there is a grave of the famous Urdu poet Mir Dard. The maidan (ground) in front of Turkman Gate is known for political rallies, but it has been a site for Ram Lila for more than a hundred years. The maidan used to be famous during Ghalib’s time for wrestling matches and there used to be a huge talab or water body. Mahatma Gandhi used to hold prayer meetings here before Independence in which thousands of people used to take part. 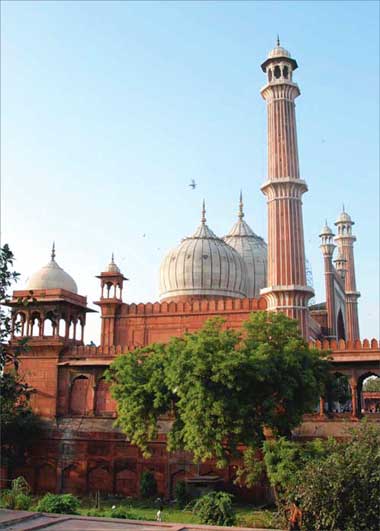 From Turkman Gate to Jama Masjid you can see not only historical sites such as the Kalan Masjid or even Kamla Nehru’s haveli but also a great many ruins of old mansions. The area surrounding Jama Masjid was home to great Urdu poets such as Ghalib. He lived in Ballimaran. Ustad Dagh, Mir Taqi Mir, Zauq, and Momin also resided in the lanes and bylanes of Chandni Chowk and Chawri Bazar. The Chawri Bazar was the street where the courtesans used to entertain the elite in the Mughal period. 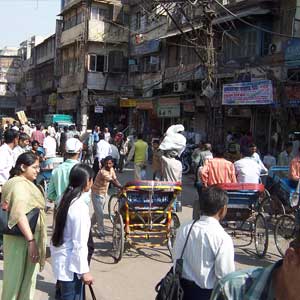 Chandni Chowk is steeped in history. It was here at Kotwali that Aurangzeb had the ninth Guru of the Sikhs Guru Tegh Bahadur executed. Today a Gurudwara stands on the site of the Kotwali and thousands of pilgrims visit the Gurudwara every day.

Adjacent to the Sikh temple is a mosque called Sunehri Masjid or the golden mosque. It was here in 1739 that the Persian King Nadir Shah ordered the massacre of the citizens of the city because some people had attacked and killed his soldiers in the bazaar. Nadir got thousands killed including women and children. He later departed carrying the famous Peacock Throne.

Chandni Chowk was also the scene of a bloodbath when Aurangzeb staged a coup against his father Shah Jahan and had his three brothers Dara Shikoh, Murad, and Shuja publicly executed. Dara, who was the heir apparent and a favorite of Shah Jahan, was brought in chains to Chandni Chowk and publicly beheaded. It was a shocking sight to the citizens of Delhi because Dara was extremely popular. Dara’s library today houses a polytechnic. After the first war of independence in 1857, the library had become the residence of the British Resident, William Fraser, who later shifted to Bara Hindu Rao where he was later assassinated. The Nawab of Loharu was charged with the murder and he was hanged following a trial just outside Kashmere Gate. Though it is called Chandni Chowk or the moon street, it has had a gory past. Between the period following the death of Aurangzeb and the war of 1857 spanning nearly a hundred years, Shahjehanabad had been ransacked and looted by a succession of raiders. One Mughal Emperor Shah Alam suffered the indignity of getting his eyes gouged by a dagger by a Pathan chieftain inside the palace. He not only blinded the king with his own hands, but manhandled the old king and tortured his children and the women in the harem. 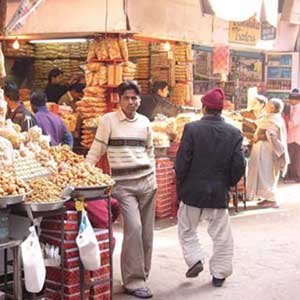 Chandni Chowk today is a bustling wholesale market for spices, jewelry, textiles, and electrical goods. But according to François Bernier, it was a bazaar where rich merchants and travelers came to buy and sell rare pieces of jewelry. Bernier in his book Travels through the Moghul Empire describes Chandni Chowk as an elegant place where beautiful coffee houses and sarais attracted members of the royal families and nobles who would come in all sorts of exotic means of transport such as horse carriages and bullock carts. Rich and influential people either rode an elephant or a horse. The mile long street was adorned by a canal which ran in the middle and the merchants attired in white muslin and wearing turbans would sit cross-legged leaning against bolsters in their elegant low ceilinged thatched roof shops. A few of the homes of famous merchants are still standing. The most famous of the merchant families were the Chhuna Mals and Lala Jugal Kishore. 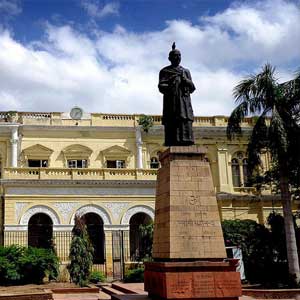 The Town Hall at Chandni Chowk.

Today some of the other popular destinations are the spice market in Khari Baoli, where one can obtain not just spices but dry fruits as well as pickles and high quality rice and silver leaf. Kinari Bazar, also known as the ‘Wedding Street,’ is by far the most colorful shopping centre. Here one can find beautiful embroidered saris, zaridar borders, and all other items used in decorating homes. Chandni Chowk is a huge market for cameras, electrical goods, and textiles. Chandni Chowk is also famous for traditional cuisine and sweet shops. Some of the sweet shops such as Dariba’s Jalebiwala, Ghantewala, Chaina Ram, Kanwarji, and Haldiram are more than a hundred years old. The Chaat Corner near Central Bank is now a great landmark of Chandni Chowk. Rumor has it that the man who owns the Chaat Corner owns half a dozen Mercedes cars and lives in a mansion in Model Town.

The sights and sounds of the old walled city brought back nostalgic memories and Naseem and I parted after having travelled down memory lane together.

The author was the India Correspondent for the BBC. Reprinted with permission from India Perspectives.