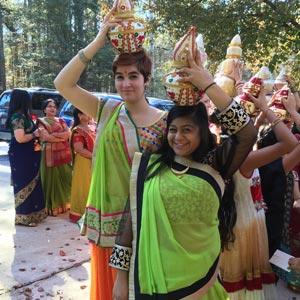 Race, ethnicity, color, culture—negotiating these ‘identity markers’ can be a trying experience, as this young woman expresses in a frank exploration of what it means to grow up in America with parents of different race.

“How does that work?” is the question I often get the first time someone comes to know of my mixed ethnicity. How does my family work? How do I work?

Aside from the fact that they laugh, love, and go about their lives like any other couple, my parents are considered an unlikely pair. My mom is smart, strong, and always stands up for what she believes in. My dad is creative, a little strange, and never fails to make those around him feel loved. She goes to work, he stays home. She is Indian and he is white. All these differences are equal to me now, but they haven’t always been.

I have fair skin and dark hair, but you’d never guess I was half Indian by looking at me. Despite growing up with the culture and even learning bits of Gujarati, as a little girl, I considered myself white. The concept of race to me was (for lack of a better phrase) very black-and-white, no gray area. I thought that if my skin was white, I must be white. I experienced the world as a white female, based almost entirely on the fact that the rest of the world saw me as a white female and treated me like one.

I quickly realized that how you identify yourself is one thing, while validation by family and friends is another. White peers for the most part saw me as Indian, because I wasn’t completely white and therefore must be ‘other.’ Indian peers, and even some family, tended to not see me as a ‘real’ Indian, and would assume I didn’t know what it was like to be one.

Growing up, the Indian part of me was always as natural as my eye color. I was raised on Gujarati cuisine, watched Hindi movies, and played with my cousins. My family is big and beautiful and I couldn’t be more grateful to have them. The only time I felt uncomfortable participating in my culture was as soon as I was in a situation without them. The rest of the community didn’t seem to understand. At the Indian grocery store near my house, complete strangers would shamelessly stare at me, even talk about me because they assumed I wouldn’t understand. I felt like an alien. I felt like I needed to hold up a sign that said, “I’m one of you, I promise!”

As I got older, I became more involved in Indian culture, attending garba and other religious occasions every year, and spending more time with that side of my family. I slowly started to see myself as non-white, which led to the whole problem of how I wanted to present myself to the world. Was I white? Indian? Neither? Did I belong anywhere? With anyone? I became increasingly more aware of how much I stood out among both races, not really fitting in any group. Even with my family reassuring me that it really didn’t matter how other people saw me, shutting out negativity is easier said than done.

For a long time I fought against my own appearance. I tried to convince myself I looked Indian, thinking that if my skin was darker or my features less European I’d be treated differently. Around people of color, I spoke more freely about my own race and problems that I faced because of it, on some level hoping to be recognized as ‘one of them.’ Around mostly white people, I tried to let them know that I had Indian heritage without being too outright about it, also hoping to be recognized as a person of color.

Constantly feeling the need to belong was tiring, to say the least. And it was pointless. I tried to act as Indian as possible, but in the end, culture is what you grew up with, what makes you feel safe, and what you call home. For me, that’s both America and India. In equal parts, my heart belongs to both.

Now, I consider myself biracial. Not 50% white, 50% Indian, but an identity all by itself. When people ask me ‘what I am,’ I’ll say and rather than or. Often, it’s hard to relate to other biracial people, because everybody has a different experience and a different story to tell. But more and more people are becoming aware of each other’s cultures and creating interracial families. One thing is for sure: the only box I fit into is the ever-growing population of mixed-race people in America, a growing demographic that’s slowly but surely making its own place.