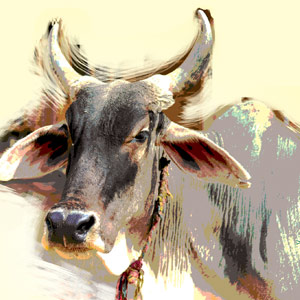 The Hindu veneration of cows is being abused by these “cowboys” who are making it a tool to flex majoritarian political muscle.

In August 2016 the Indian prime minister Narendra Modi blasted those who unleashed violence in the name of protecting cows. Gau rakshaks or cow vigilantes had just been accused of flogging four Dalit (former untouchables) youths for skinning a dead cow, tying them to an SUV, and parading them in Gujarat, Modi’s home state. That video had been uploaded on social media as a warning to others.

Speaking at his first town hall style event, Modi said that 70-80% of those who claim to be gau rakshaks were anti-socials trying to hide their sins. “If they are true protectors, they should realize most cows die because of plastic, not slaughter,” said the prime minister. “They should stop cows from eating plastic.”

Less than a year later, in April 2017, a group of cow vigilantes attacked some vans transporting cows in Alwar in the state of Rajasthan. One of those attacked, Pehlu Khan, succumbed to his injuries later. It turned out he was a dairy farmer.

The ministry of the absurd
When an uproar broke out in parliament over the issue, Modi’s minister for minority affairs, Mukhtar Abbas Naqvi, said, “No such incident has happened on the ground the way the incident is being presented.” Later he said he was not talking about the Alwar incident. Rajasthan’s home minister Gulab Chand Kataria seemed to both condemn and condone the lynching in the same breath. “The cow protectors have done a good job by protecting cows from smuggling. But they have violated the law by beating them brutally.”

Even before anyone was arrested for the assault, the government had booked some of the victims on charges of cow trafficking.

The cow is a sacred animal to millions of Hindus. Many do not grasp the depth of that veneration. “A single drop of cow blood falling on earth pains Hindus,” said a minister in Gujarat while passing a bill imposing stringent punishment for cow slaughter. He called it not a bill as much as the “feelings of crores of Indians.”

When Yogi Adityanath was appointed the chief minister of the state of Uttar Pradesh in March, the cow assumed center stage in national politics. The media was awash with reports about how Adityanath fed his cows before having his own breakfast. His gaushala, or cow shelter, has some 500 cows. While Adityanath was known for his incendiary political statements about Hindus and Muslims, his supporters pointed out that in his gaushala his favorite cow Nandini had a Muslim caretaker.

But even as the cow was being used to airbrush the fiery Adityanath into a kinder, gentler avatar, his government started cracking down on slaughterhouses in India’s largest meat processing state. While Adityanath claimed the government was only going after “illegal” slaughterhouses, it caused a massive shortage of meat statewide. Lions and tigers in the zoo had to make do with chicken after buffalo meat supplies dried up. The Allahabad high court warned the state government that it could not use a crackdown on illegal slaughterhouses as a cover for a de facto crackdown on meat, and on those who work in meat processing. “Compliance of law should not end in deprivation,” said the court, adding that food cannot be treated as “a wrong choice.”

Despite the court’s warning, the wind seems to be blowing the other way, and some government ministers are fanning it and even re-interpreting the constitution in the process.

“One can eat his food of choice but avoid eating that food which is prohibited as per our constitution,” said senior Union minister M. Venkaiah Naidu when quizzed about beef. As it happens, the constitution does not prohibit any kind of food. It does mention as a directive that the state should take steps to preserve and improve the breeds of cows and calves and milch and draught cattle and prohibit their slaughter. Directives are advisory and non-enforceable, and different states implement them differently or not at all.

Meanwhile, commerce and industry minister Nirmala Sitharaman, usually regarded as a more modern, moderate voice in the government, has gone on television to say that cow protection was part of the Indian freedom movement itself. “(Yogi Adityanath) is doing what is the spirit behind the freedom movement,” she said. “We should not exaggerate a situation.”

In Gujarat, chief minister Vijay Rupani said his state followed Gandhi’s principles of nonviolence and truth, and in that spirit he wanted his state to become wholly vegetarian. His government passed a bill that proposed a life sentence for those found guilty of cow slaughter. The minimum sentence would be 10 years.

That Gandhi’s name was invoked is ironic.

Gandhian lie and the BJP’s dilemma
Mahatma Gandhi, the man who led India’s freedom movement, once said he had received tens of thousands of postcards calling for a ban on cow slaughter but he said it had no effect on him. “I do not doubt that Hindus are forbidden the slaughter of cows. I have been long pledged to serve the cow but how can my religion also be the religion of the rest of Indians?” he asked. He also said “I would not kill a human being for the protection of a cow, as I will not kill a cow for saving a human life, be it ever so precious.”

But in contrast to Gandhi’s beliefs, the placid cow is now the battering ram of a more bullish Hindu nationalist politics. In the state of Chhattisgarh, chief minister Raman Singh has boasted he will hang those who kill cows in his state. 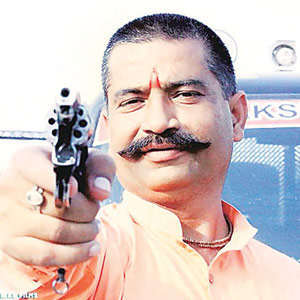 Vigilante cow protectors who claim to value the life of cows more than humans seem to be taking license from the recent consolidation of political power of the BJP, the Hindu nationalist political party. (Photo: Facebook/Gau-Raksha-Dal-Satish-Kumar)

This is less about cows than about consolidating the Hindu majority, especially those who feel that in the name of secularism, Indian politicians have pandered to minorities on all kinds of issues. That majoritarianism is now riding on the back of the cow, even as India remains the world’s top exporter of beef, which includes buffalo meat, fetching the country as much as $4.8 billion in 2014.

The BJP government does realize that cow-belt politics have little traction in some corners of India. Muslim leader Asauddin Owaisi mocked the BJP by quipping, “BJP’s hypocrisy is that in Uttar Pradesh the cow is mummy but in the northeast it’s yummy.” In India’s northeast, beef is commonly consumed and the BJP has made a lot of inroads into that corner of India in recent elections and does not want to jeopardize its fortunes there. So it has been quick to promise there would be no ban on cow slaughter in those states.

Some Indian political observers have said that the current gau-raksha politics suggest that the life of a cow is worth more than the life of some Indians. But in reality, even the life of cow is not worth that much to many who are up in arms about its welfare. Rajasthan, the state where the dairy farmer was lynched, remains the only state in India with a ministry for cow welfare. Some 500 cows died a grisly death in 2016 in the state-run Hingonia cow shelter in Rajasthan, buried in their own dung and muck.

If gau rakshaks were truly vigilant about cow welfare, they would be talking a lot more about death by plastic rather than death by traffickers.

But then, there’s no glory in lynching a plastic bag and putting that video up on social media.