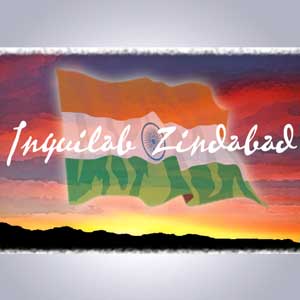 “Inquilab Zindabad…!” Thousands of people thronged the streets, holding placards, their voices screaming out as one. The words echoed, piercing the soul of all who had lost their sons, and strengthening their faith that the other sons would come back. Each morning, the sun rose, and with it the hope for freedom.

Preet sat close to the window, searching the crowd, eyes desperately seeking the one without whom the world seemed incomplete. Dusk slowly became deadly night, but she sat transfixed, trying to identify silhouettes. Hoping he was all right. It was a time when brave men struggled for survival.

Bravery, the first virtue of Amanbeer that had struck her, awing her. Back in law school, it seemed a virtue of manhood. Little had she guessed that his valor would not limit itself to the four walls of the classroom, but venture out and about, fighting for the country’s long-lost independence. The fire in his eyes that had helped him burn injustice to ashes, now ignited the torch of the freedom struggle. Earlier Amanbeer had been the pride of her life. But as the struggle grew more intense, she feared losing him.

Just then he rapped the door with the usual code, jolting her back to reality.

A smile lit up her lips. She needn’t have feared. He was an adept mutineer.

Opening the door, she fought the urge to hug him.

“It’s past midnight, why didn’t you at least inform me?”

“I would have if I’d known, but they keep locating us every time. Leave us like nomads hiding in our own country...

“But how long will you be risking it all for the country? Do I mean nothing to you?”

“You are my strength. You think your rotis are enough to make freedom fighters like me?”

He smiled, “I am your sunshine, dear. I will be with you at the start of each day, no matter what!”

It was a time of terrible unrest, Feeding on our wealth, the parasitic foreign rulers were sucking on our blood, our sweat! Nadir Shah looted us only once. But the British looted everyday.

Amanbeer had read the law long enough to realize the hypocrisy printed in the pages. Inequality prevailed in their journals. They were plundering both our wealth and our age-old heritage.

But what bothered him the most was the passing of the Rowlatt Act. They had no right to imprison our revered leaders without proof, just on the pretext of controlling conspiracy. Britain was conspiring, not us. If our brothers rebelled, it was not to promote violence, but to express their anger against the selfish unequal rule.

The English portrayed themselves as smart and intelligent individuals. Why was then the obvious so difficult for them to comprehend? Britain was trying her best to dampen the rebelling spirits, but she would not succeed for long….

The next morning Preet woke up to find him gone. She knew he had an important speech to deliver that Baisakhi afternoon. He had urged Preet to attend, but she feared her support would only push his revolutionary antics further. His safety was her main concern.

The whole day long there was no sign of him. He often got late. There was no need to worry. She drowned her anxieties and hunger sewing khadi kurtas.

It was midnight before she heard the usual rap. Running to the door, she opened it. Nausea gripped her. She felt faint and cold. Amanbeer lay injured in the arms of two others. Motionless. Entering, they placed him on the cot. She ran towards him.

She tried to revive him, but in vain. The bandage across his right shoulder was soaked in blood. Preet felt helpless. She recognized Navjot among the men. Placing his hand on her shoulder Navjot said, “Bhabhiji…Tussi fikar na karo….It’s just a bruise…the bullet grazed past Bhaiyya’s shoulder…Par sadde Aman Paji teh sher hai…He fought death until it was safe enough for us to move him. Even after that he wished to help our wounded brothers. But he had no strength left. Bhabhiji, please take care of him…otherwise who will take care of the country?”

Preet wanted to smile, but she only ended up crying in Navjot’s hands. When she composed herself they left, after providing her packets of pain relievers and other medicines. They would come to check every day.

She observed the silent figure lying calmly in his bed. This young innocent face would soon change the face of the world. He would be up on his feet soon, being the brave soldier that he was.

Preet realized how selfish and self-centered she’d been. Dozens of fighters sacrificed their lives each day so that she could be free. People starved to death or paid exorbitant taxes. How had she shut her eyes to all the injustice? The British had entered with the intention of trading spices, and now they traded with our lives!

If only she had lived in the real world. All this while, she had been locking her windows, pulling the curtains down, trying to drown herself in work that now seemed mundane and unimportant. Now, new thoughts started inspiring her, strengthening each muscle. A part of her had always knowingly stayed away from the revolution. But now that part was dying. Her husband had been shot at.

Navjot paid a visit. “Is the fighter getting better?”

“Oh yes, very quick. He might start rebelling for food anytime,” she joked.

A bunch of young fighters came in disguise, arriving separately. Preet tried her best to make them comfortable.

“That’s why she is your Bhabhi,” Amanbeer winked.

After everyone was settled, Navjot began, “Brothers, the casualty figure has risen to a thousand five hundred. All the wounded cannot be moved because of the curfew. They spared no one. We are not afraid of death. Many daring men have kissed the noose, so that we may be free. It is a great privilege to be a shaheed. But here they targeted our innocent brothers. The bullets have not just left permanent holes on the walls and buildings, but even in our hearts. They have tried to crush our spirit, now we will crush their reign.”

The discussions continued till late evening. Preet couldn’t help but be a part of it. Each horrifying scene at the Bagh kept playing in her mind. A desire emerged in her, to do her bit for the land that had given her everything—friends, family, a home, and Amanbeer! Like a caterpillar that slowly transforms into a butterfly, she was changed now, fearless and strong.

The next day, Navjot paid another visit, bringing news of a protest march at Gujranwala.

Preet rose. “Wait…” She returned with a placard that read ‘Quit India’ in bold letters.

“Thank you,” Navjot stretched his arms to grab the placard.

Navjot gaped at her, shocked. “Bhabhiji…it is too dangerous.”

Preet replied with firm authority, “I have given this a lot of thought. I want to see my country free, ruled by my own brothers, not as mere puppets or slaves, but as independent people running our country the way we want. My decision is absolute.”

Navjot had always seemed serious, but he flashed a smile. Finally the deer had learnt her gait.

She marched, along with fifty brave men, to Gujranwala, hurling protests on loudspeakers. The crowd got a little out of hand, burning posters and government property. The police resorted to lathi charge, and then used machine guns to quell the protesters. But the determination of the crowd couldn’t be curbed.

Preet suddenly found herself singing her favorite deshgeet. She feared forgetting the words, but at the end of each verse, the next set of words were automatically finding a way to her lips.
“Sarfaroshi ki tamanna ab hamaare dil mein hai
Dekhna hai zor kitna baazu-e-qaatil mein hai…”
First she sang alone. Then a large crowd joined her. Preet felt proud. Her morale grew stronger. Memories flashed in her mind. She recalled standing on the school veranda, singing to her heart’s delight. She had always loved the song as a child. The tune reminded her of the small petite Preet in school, afraid of being pulled up for not doing her homework, afraid to stand up against wrong, afraid to follow her heart, her dreams. Afraid to fly. Little Preet had come a long way…

Her resolute awakening could hardly be suppressed. The policemen noticed her. The pain was excruciating as the lathis hit her, first on her legs, then her back, but she sang on…and on…and on….The police felt mocked, and one hit her on the head…then it all turned black.

“So my valiant princess finally ‘awakens’...”

Preet found herself lying on her bed at home…enveloped in pain. Amanbeer looked down at her fondly.

“Nothing much, dearest. You frightened the police, so they retaliated with their usual cowardly act, an attack on the head.”

“What about the others?”

“Everyone’s fine. How could anybody get hurt when you were at the protest?”

Preet smiled. With his unharmed hand, he offered her water. She looked in his eyes, then said, “Remember that teaching job you suggested six months ago? At the girls’ school.”

“Oh yes, the one you refused.”

“My little sparrow has finally found her wings.”

Preet responded resoundingly, “And she will fly high and strong against the wind.”

[Kakoli Laha is a final year engineering student in India, and a freelance writer whose work has been published in women’s magazines.]