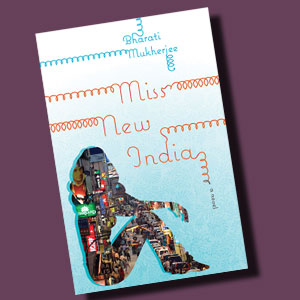 It was fifty years ago that author Bharati Mukherjee left India for graduate studies in the United States. She remembers the India of the past as being ossified, quite unlike the emerging giant it has transformed into now.

By now the story of India’s economic boom is relatively old news: the rise of the outsourcing powerhouse, its efficient call centers, and the relentless drive of its youth that helped fuel these transformations, have all dominated headlines for a while.

It is against the backdrop of this “new” India that Mukherjee has set her latest novel, Miss New India (Houghton Mifflin Harcourt). The Miss New India of the title is Anjali Bose, who is much more comfortable being an Angie. The young and talented Angie finds her ambitions are outsized—no match for the small town—Gauripur, Bihar—that she is brought up in. “Even in Gauripur she had grown up on the modern side of a great national divide,” Mukherjee writes about Anjali. “From the backwater of Gauripur, she’d somehow caught the fever; she was part of the bold new India, an equal to anywhere, a land poised for takeoff.”

That dynamism is given wings by Peter Champion, the American expat teacher in town. Anjali is his favorite student, the one with potential, and Peter urges her to not just settle for a married life as her parents would have her do, but instead move to Bangalore and put her talents to use in the new economy.

At home in Gauripur, the social isolation the Boses feel is quite severe. They are “part of a remnant Bengali community inside a sea of Hindi-speaking Biharis.” The family as a whole is still smarting from the failed marriage of Anjali’s older sister, who is now a divorced single mom living in nearby Patna, somehow making ends meet with a low-wage job. Nevertheless the Boses keep up the relentless pressure on their younger daughter to get married and “settle down.” Anjali, in the meantime, has to fight these opposing forces. On the one hand the thought of maybe finding a “good boy” through the arranged marriage circuit and settling down is not an entirely unpleasant one. Yet she knows, as her sister had warned her, “matchmaking might start as a small cloud on the distant horizon, but before it was over, the marital monsoon would break, and no one in the world could hold the floodwaters back.” Then there’s the attraction of leading an independent life in a big cosmopolitan city like Bangalore. Peter Champion repeatedly paints a glamorous picture that appeals to “Angie” and eventually it’s one she cannot resist.

Anjali leaves Gauripur for Bangalore with some money loaned her from Peter and directions to Bagehot House—a boarding house in the city run by an old Anglo-Indian lady called Minnie Bagehot. Bagehot is still hanging on to the past and standing firm in her slowly decaying mansion despite evidence of change everywhere. In that sense she is much like Anjali’s own parents, whom Anjali viewed as “irremediably alien, part of a suspicious, impoverished, humiliated India.” When asked if the parents were byproducts of colonialism, Mukherjee isn’t quite sure. “I don’t know if her parents suffer from ‘colonial’ subservience, or something older and more native-grown,” Mukherjee says. “I think the latter, since ‘colonialism,’ while pervasive, didn’t reach down to the Bose family level. They have the pride (or arrogance) of the Bengali minority in Bihar, they have a ‘place of security in the national bureaucracy’ and are content never to challenge it.”

“Anjali is an emblem of rebellion against that self-satisfaction,” Mukherjee adds. “She wants personal happiness, not class or caste or tribal privilege.” And the incredibly lucky Anjali does find that personal happiness she seeks, in good measure. Mukherjee chronicles Angie’s wide-eyed discovery of the new India; her migration from Gauripur to Bangalore is almost like a move to a new country. Every accent, every attitude seems incredibly foreign to the girl from small-town Bihar. Yet she slowly makes her way and finds her place in the world with the help of some very generous friends.

Mukherjee, a winner of the National Book Critics’ Circle Award, has written about Indian women before in a collection of works that has won high praise in literary circles. In fact, the new book was originally framed as the third novel of a trilogy that included Desirable Daughters and The Tree Bride. Tara Chatterjee, the narrator of the first two, makes only a cursory appearance here. “She would have been narrator of the third, except that the publisher of the first two (Thea Books of Hyperion) went out of business,” Mukherjee explains. “So I had to rewrite the third volume for a new publisher in order that it could stand alone.”

The economic boom in India is rich material just waiting to be mined, and Mukherjee is quite intrigued by the “phenomenal changes” taking place in the country. For the book, Mukherjee went to Bangalore “on three different occasions, and visited call centers, read their manuals, and talked with young women who were involved.”

Despite all the prosperity, Mukherjee, like Peter Champion in the book, is a little worried about the stability of this form of economics. “The newfound prosperity in this city is breathtaking, and I don’t mean to disparage it. Prosperity is a good thing,” Champion says in the book. “But I’m not so sure of the wealth that comes from outsourcing. I wish the prosperity was rooted to something. It seems as flimsy as a kite or a balloon. What comes drifting in with the winds might just as easily drift away.”

Mukherjee echoes these sentiments pretty closely. “How you view the ‘new India’ is a function of your vision,” she says. “Is the ‘boom’ in India a fragile and temporary thing, doomed to passing, or a permanent feature of the Indian landscape? The jury is still out.”

“One cannot rely on one’s accidental advantages; as India grows more prosperous, its appeal as a cheap market will drop,” Mukherjee says. “International capital will withdraw to Mauritius (or whatever), and India will have to draw on its own industrial and technological strengths, or else slip behind.”

The young adults shaping this revolution seem equally conflicted about the phenomenon. “Bangalore wasn’t about global economics,” Anjali points out. “It was an emotional and moral tsunami; it washed away old beliefs and traditions, the comforting ones together with the crippling, and if you survived, you knew you had the spunk and the grit to rebuild.”

At the same time, friends worry: “We know we are in the middle of a revolution, but is that a good thing? Where will it end? Are we riding a tiger, have we started something we can’t control?”

It’s also interesting to see how the younger set views traditional Indian values and makes them uniquely their own. One striking example is when a young call-center specialist shows up at Angie’s house in a flashy car yet says: “Deep down this capitalist is a Gandhian.”  Mukherjee believes these new interpretations might not have as much cachet as they’re supposed to. “‘Gandhian’ is another of those Indian words that can stand for anything the speaker wishes, even when it stands in contrast to Gandhi’s teaching,” Mukherjee says. “If you’re ‘spreading the riches to the poor’ (by whatever means) you’re Gandhian. If you’re from the lower castes and lower classes and make money, you can claim ‘Gandhism.’ This is meant to show the corruption of the ideal, not to cast aspersions on the Mahatma,” Mukherjee points out.

Mukherjee is currently a professor of English at the University of California in Berkeley. When asked if, like Peter Champion, she was a mentor to any students, she says she might have mentored a few, although not with as much intensity (as Champion). “They come to me with their problems and I listen to them,” she says. “I don’t counsel, but they wouldn’t come to me in the first place if they didn’t feel my sympathy.”

Mukherjee has often voiced her concerns about being a hyphenated (Indian-American) writer. There are real reasons to protest, she explains. “I feel that the hyphenization of writers from outside the Judeo-Christian tradition has been a way of alienating us from the mainstream,” she says. “I have always seen myself as a writer in the American mainstream of immigration literature, no different from dozens of others from various backgrounds—many of them my friends.”

“The term ‘Asian-American’ is particularly galling, when you think how different Indians are from Chinese, Korean, Iranian, Vietnamese, Filipino, etc., all of (whom) are Asian, none of (whom) have anything in common,” Mukherjee adds.

“Also because she is morally slippery—she experiences, and she moves on,
unlike her sister and mother,” Mukherjee adds.

Yet when as Mukherjee writes in the book, “these were the luckiest times to be young, adventurous, and Indian,” a little bit of extra luck doesn’t hurt.