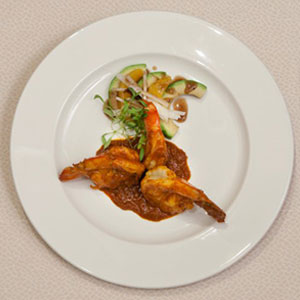 It was like a Big Fat Indian Wedding: 800 guests, a glittering space, lots of music—and of course an unending feast of Indian food. Welcome to the Varli Food Festival, New York’s big bash of Indian cuisine with over 13 celebrity chefs and 30 restaurants participating. Noted celebrity chefs walked the red carpet and the spotlight was firmly on Indian food.

Ten years ago, this may have been just a foodie’s wild fantasy but now the time seems ripe for showcasing Indian food. Indeed, if you could read the chai leaves, they would probably forecast that Indian food is hot and happening on the U.S. scene. As more and more Americans travel to India or intermingle with Indian Americans at work and play, Indian food and spices are garnering new fans.

Indian restaurants have multiplied in Manhattan and across the strip malls in the suburbs, with hot new upscale restaurants like Junoon and Tulsi opening up in Manhattan.  Chicken tikka masala is becoming a popular takeout, and packaged Indian meals are finding their way into Trader Joe’s, Whole Foods and mainstream supermarkets. The names of some of the dishes may be unpronounceable—but the taste is one that more and more Americans love.

Celebrity chefs have further raised the profile of Indian food with their cook books and their appearances on national television. Padma Lakshmi is the very popular host of Bravo’s Top Chef while Jehangir Mehta and Maneet Chauhan have both appeared on Iron Chef.  And now Floyd Cardoz and Suvir Saran are battling it out on Top Master Chefs along with several American chefs.

So the time seemed ripe to take Indian cuisine to the next level and give it the arc lights. The idea for the Indian food festival was the brainchild of Varli Singh, an innovative entrepreneur who believes in the power of Indian food. She is the publisher of Varli Magazine, which she hopes will be the ultimate guide to Indian dining.

“The concept of Indian food glamorized and Indian chefs showcased at this level was something that was needed,” says Varli Singh. “The skills and variety were already there but no publication or stage was available to display them.  Indian cuisine in the U.S. is on the way to becoming a major choice in mainstream also but needs a little awareness and little glamour.”

There are many mainstream food festivals organized in New York but this was the first one devoted totally to Indian food. It was held at the prestigious Altman Building in the heart of Chelsea. For Indian food lovers, this is the equivalent of Foodie Heaven. An opportunity to taste the food of not one, not two but 13 noted Indian chefs—all under one roof.

Guests enjoyed food tastings from 30 Indian restaurants, watched a cooking demonstration on the stage by Sanjeev Kapoor and got to mingle with many of their favorite chefs. There were also book signings and a silent auction that helped raise funds for the Food Bank of New York. The party atmosphere was heightened by a live performance by pop star Tina Sugandh.

The chefs included names familiar to fans of Indian cuisine—Floyd Cardoz, Vikas Khanna, Jehangir Mehta, Hemant Mathur, Prasad Chirnomula, Hari Nayak, Maneet Chauhan ,Walter D’Rozario and Peter Beck. They are the master chefs at some of New York’s hottest restaurants, while others have written cookbooks or have been contestants on major food shows. Joining them from India was Sanjeev Kapoor, the host of the popular cooking show, Khana Khazana. Chef Pankaj Bhadouria and Radhicka Agarwaal, former contestants from Master Chef India, also flew in for the event.

“The strength of any community is unity, and Varli Festival has given that strength to all of us,” says Junoon’s Vikas Khanna, one of the celebrity chefs who walked the red carpet and welcomed guests.  “Being in the kitchen world, we don’t get much time to meet our Indian restaurant family. This gave us an opportunity to meet and applaud our peers for the wonderful work they are doing.”

Guests went from table to table, nibbling at everything from kebabs to dhokla to paneer tikka. The offerings went from the traditional to fusion (See sidebar).  Indian wine merchants like Wines of India and Good Earth Winery had also joined in, lending a spirit of oomph to the festival.

On a lower level there was a whole spread of Indian desserts and gourmet sweets. There were delicacies from Bittersweet, chef Surbhi Sahni’s custom catering service of exotic desserts. Sahni is also the pastry chef at the new restaurant Tulsi. Newcomers to the food world were also showcasing their best, such as Parul Patel whose company The Cake Designer specializes in eggless cakes. She was showing the Henna Cake, a seven-tier eggless cake decorated with edible gold and edible jewels, besides her cupcakes in varied flavors.

While there were some non-Indians, the crowd seemed overwhelmingly South Asian. The vast space was full, and according to the organizers many more had to be turned away. Indian Americans are an affluent lot and are passionate about their cuisine, be they first or second generation. Indeed, food is the common language for many of the second-generation Indians who could be called kitchen Indians—they may not speak any Indian language but sure know the taste of a desi meal!

A nice, fun touch was a spice market, where the guests were given empty bags and told to go shopping—on the house! They were invited to shop for ten free items and it was quite a scene with shoppers picking up basmati rice, masalas and packages of bhel and agarbatis with great deliberation. Guests may have paid $100 per ticket, but it is human nature to love getting freebies. Another usable freebie was a coupon book with coupons valued at $500 to be used in various participating restaurants.

Jehangir Mehta, noted chef and author, owns Graffiti as well as the brand new restaurant Mehtaphor, both hot and happening spots. He was one of the hosts for the evening and was mixing with fans and guests in the crowded halls. Normally restaurant goers rarely get to meet the chef so everyone seemed to want a photo with him, it seemed!

“It’s absolutely brilliant to do this here in NYC, which is a city that loves to embrace all cultures,” said Mehta. “Plus we do have a great influx of Indian cuisine taking the stands off late so to capture the market in full force is amazing. I was very pleased to host this event and that gave me an even larger stage to interact with the fans. Talking of how Indian food has gained popularity through media and fine-dining restaurants is amazing to watch.”

The Varli Food Festival, as a first-time event, certainly created a buzz. So what’s next on the agenda?  Singh has set her sights on creating nationwide food festivals in various states, so soon everyone will hopefully get a taste. Happy eating!

[Lavina Melwani is a New York-based journalist for several international publications and blogs at www.lassiwithlavina.com]

This dish is one of the favorites on our appetizer list at Junoon. Its origins are in Goan cooking, which evolved with considerable influence from the Portuguese who used Goa as a trading port for many years. People request this dish often for catering. If served as an appetizer it will serve four to six people. We pair it with avocado chaat masala and raita in the restaurant. —Vikas Khanna

Make the sauce: heat a large, heavy-bottomed skillet over high heat. Add 2 tablespoons of oil to pan and when oil is hot, fry mustard seeds stirring constantly until they begin to crackle, about one minute. Add the onion to the pan and reduce heat to medium. Continue to cook, stirring frequently. When onion is softened slightly, add the garlic and the hot chili flakes and continue to cook, stirring frequently until garlic is cooked, about five minutes. Add the cumin, turmeric, garam masala, clove, cinnamon, black pepper, salt and sugar to the pan along with the vinegar and tomato purée. Bring to a boil and then reduce heat to low.  Let the piri piri sauce simmer, uncovered, for 15-20 minutes. For a refined texture, remove pan from heat and let cool for fifteen minutes before processing in a blender until smooth. Return sauce to heat and let simmer gently while cooking the shrimp.
Cook the Shrimp: heat 2 tablespoons of oil in a heavy-bottomed skillet over high heat. When oil is hot but not smoking, add the curry leaves and shrimp to the pan and sauté, stirring and shaking the pan for two to three minutes until the shrimp is no longer transparent. Add the sauce to the shrimp, reduce the heat to low and let simmer until shrimp is cooked through, about three more minutes. Taste for salt and then serve immediately accompanied by avocado, raita and fresh-baked naan.