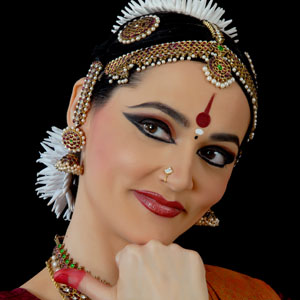 “I love India because of its rich cultural diversity, its various religious faiths, and the simplicity of its people. On the other hand, I can’t enjoy going to crowded places, can’t understand the chaos on Indian roads and the lack of planned urban development,” says Marie Elangovan in an interview, about making India her home.
(Photo credit: Ashwani Chopra)

I met Marie Elangovan some time ago and was highly impressed by her expertise in Bharatanatyam, and also her strong cultural values and simplicity as a person. As a Canadian living in India, she has tried to take the best from both cultures for twenty years and is a well-known dancer and teacher of the dance form in Delhi.

A meeting with her leaves one amazed at how well Marie has become a part of India, merging art, identity, and values with perfect fusion and harmony.

Excerpts from an interview:
What made you come to India and learn Bharatanatyam?
I was a student of religious studies at Montreal University when I decided to come to India. I simply fell in love with the beauty and purity of the dance style and its devotional aspect. I was fascinated by Indian art, be it in dance, music, or sculpture. Fortunately I was introduced to my Guru K.J. Govindarajan when he was on a visit to Montreal and I decided to come to India and dedicate myself to learning Bharatanatyam.

What has been your experience in India up to now?
I love India because of its rich cultural diversity, its various religious faiths, and the simplicity of its people. On the other hand, I can’t enjoy going to crowded places, can’t understand the chaos on Indian roads and the lack of planned urban development. 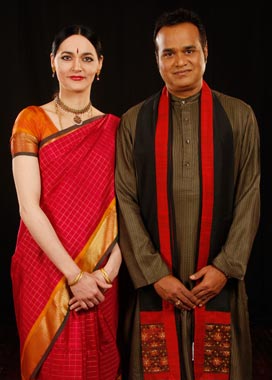 Marie Elangovan decided to come to India while a student of religious studies at Montreal University…then she married into Bharatanatyam, in more ways than one.

“We have realized that mutual differences can enrich the relationship of a couple, not compromise its harmony,” says Marie of her marriage with her guru’s son, Govindarajan Elangovan. (Photo: Avinash Pasricha)

I know you are now married to an Indian. Could you share with us the story of your romance?
He is my Guru’s son and from the time we met, we have felt a strong connection and though it may seem clichéd, I do think and feel we are true soulmates. Our marriage is based on honesty, trust, and mutual respect. We have realized that mutual differences can enrich the relationship of a couple, not compromise its harmony. Even in parenting our sixteen-year old son, Govindan, we are totally in sync with all the values we impart and communicate regularly to him on all our concerns.

For Bharatanatyam, it is important to understand the lyrics. How do you manage to do that?
I owe this completely to my husband. We sit together and write down the lyrics of the song I am to perform along with the translation and discuss everything. He is a Tamilian so we don’t have problems in Tamil. For compositions in other languages, we use the expertise of friends or refer to dictionaries, books, or the internet. Even while teaching my students, I always take my husband’s help and guidance.

People often say art brings together everyone. What do you think is the reason art is able to do this?
It’s true that art brings people together because in the aesthetic experience, the consciousness of the self ceases to exist and the attention of many individuals is turned towards the performing artistes, be it music or dance. The performing artistes are themselves absorbed in the practice of their art form and at the higher level merge themselves with it. So differences don’t play any role as the primary goal is to enjoy the artistic experience.

At a more practical level, it is common nowadays to bring artistes together, be it for a performance or exhibition, to sensitize the general population, to one cause in particular. In that case the artistes become the ambassadors of a humanitarian cause or social issue and help people to come together, focus their attention to that cause and work for the betterment of the world and the society. 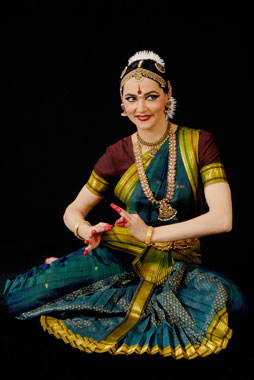 What are the various other art forms you admire in India?
Apart from dance, I love Indian music, sculpture, and handicrafts.

You must also be despairing over certain events in India. Where do you think we as a nation can improve?
Apart from the known problem of corruption in India, the main concern for everyone has become the security of girls and women all over the country. The entire international media has turned on India and is condemning what is happening to so many girls and women who are subjected to mental, physical, and sexual abuse.

I think that something drastic has to be done to stop those crimes. If the problem is addressed at the root level, it will bring some positive changes in the years to come. The government should hold sensitization camps for all the strata of the society to eliminate erroneous notions about women.

Also, since exposure to international media is becoming the norm, Indians should stop considering talking about sexuality a taboo. The government and international agencies should bring awareness through the media, especially television and newspapers. Some posters encouraging good behavior and condemning unacceptable behavior could be displayed in all public places for people to see. 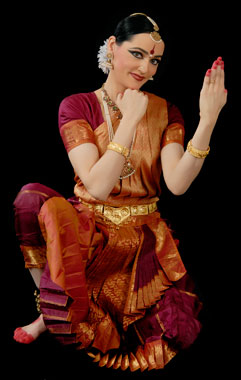 On the other hand, Canadians could learn to be more tolerant towards each other and in some cases less self-centered. They should learn the value of education from Indians and school students should be more respectful towards their teachers.

You have had a long stint in India. Would you now call yourself an Indian or a Canadian?
I think more like a Canadian than an Indian, but my heart is definitely more Indian than Canadian. Also I had my formative years in Canada but India is the place where I live and wish to spend all the remaining years of my life. Therefore, I’m partly Canadian, partly Indian, so would like to call myself a Can-Indian.