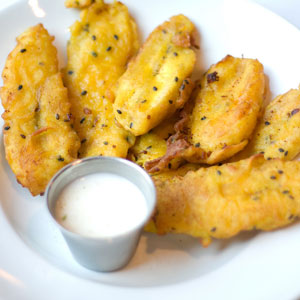 Tired of the same old buffets and the equally predictable sitar tunes? A small but growing crop of  trendsetting restaurants are breaking the mould by offering food for modern sensibilities, served in an innovative ambience.


“Nonstop Neanderthal whining!” is how an American friend of an Indian youngster described the sitar music that was a fixture at the restaurant they used to frequent for its lunch buffet.

Coming from the mouth of a college freshman hanging loose with his Indian buddy this crude remark is not so much about insulting Indian classical music as it is about the triteness of Indian restaurants and their failure to consider the tastes and sensibilities of their American patrons. Was it blind aping or was it lack of other music on hand that was responsible for the same old sitar track looping back in endless cycles in so many of these establishments? Barring a few exceptions, Indian restaurants in the U.S. have come from a cookie-cutter mould. From the music to the menu, right down to the unsmiling waiter, the sameness of these establishments is often tiresome. Sure, many of these eateries manage to feature finger-licking good food, but rarely a memorable, or even a refreshing dining experience.


And so, Indian cuisine, even with its incredibly rich and diverse fare, has lagged behind other ethnic fares such as Thai cuisine in terms of American following. That amounts to under-selling a culinary heritage that offers satiety like few others. Think of a makai ki roti and sarson da saag from the fields of Punjab, or a crisp, golden dosai from Udipi, or even aloo chaat from Chandini Chowk and you can’t help but salivate. But there seems to be hope on the horizon. I have chanced upon a few gems recently that are very different
from the same old drab lunch buffets characterized by the crimson tandoori chicken and the mushy saag-paneer. Many owners, even in smaller towns, are seeking to offer our varied cuisine on an innovative platter. “Our goal is to change the relationship America has with Indian food and to make it less ‘ethnic’ or ‘exotic’ while making it more accessible and more representative of India’s amazing culinary diversity,” says Meherwan Irani, owner of Chai Pani, an Indian street-food restaurant in Asheville, North Carolina. With street food being so all-pervasive in India, it seems like a no-brainer for those seeking to offer an
authentic experience. “We just created a space that we felt best reflected the energy and fun of the streets of India. We wanted to combine the innovative regional diversity, the fun, excitement and bright flavors of street food with the refinement and comfort of home cooking. We made the menu and ambience  approachable, fun and nonintimidating so that even people trying Indian food for the first time don’t feel

Photo: Chai Pani in Ashville, North Carolina: It’s all about flair and creativity, as with the Kulfi  Platter (below) featuring chai, raspberry, and chocolate kulfis, and cocktails with names like Rickshaw Romeo (inset) that boast “top quality transport to another world.”

Because of this new emphasis on a good ambience, relaxed atmosphere and a very welcoming vibe for anyone, these restaurants have become cool places to hang out in. If you walk into Vimla’s Curry Blossom Café in Chapel Hill, North Carolina, you will see many young Americans, college kids, couples and people from all ethnic diversities sharing Indian food. Thanks to trendsetting restaurants such as this one, Indian cuisine is slowly starting to lose its stereotype as being too spicy, oily and heavy.

Gone are the days when you saw a handful of Americans getting lost in a clutter of Indians in a lunch buffet. Health-conscious youngsters as well as vegans, vegetarians, and those who appreciate gluten-free and  organic diets have now embraced Indian cuisine.

Interestingly the new wave of Indian restaurants make it a point to source locally and cater to people who want to make an effort to eat healthy. “We wanted to create a restaurant where people can eat everyday and not feel bloated. Our goals were to reduce added sugar and replace it with sweetness from fresh and dry fruits, to add the nutrition of fresh greens, nuts, dry fruits, fresh fruits and whole grains and finally to minimize the fried foods by either replacing them with a baked version or removing excess oil by post-processing of food,” says Sumi Bhojani, who co-owns Hut-K Chaats, a nutritional Indian food restaurant in Ann Arbor, Michigan, with her husband Swarop Bhojani. The baked papdi in chaats, desserts made with dates instead of sugar, and rotis made from thirteen whole grains make the menu very traditionally nutritious and yet cool in a college town. The recipes came out from the couple’s home as they tried to cook healthy for their children. Atypically they also do all of the restaurant’s cooking by themselves.

It would be easy to presume this new crop of innovative Indian restaurants are going the route of fusion food. But make no mistake—most of them offer unapologetically traditional Indian food, but simply adapted to modern and American sensibilities. “I don’t do fusion at all. What I am doing is most traditional. It is what my mother and grandmother did in India. Growing up, for twenty years I did not have a refrigerator back in India, thus I learned to use fresh seasonal foods and that is the core of true Indian food,” says Vimla Rajendran, executive chef and owner of Vimla’s Curry Blossom Café.

Photo: Hut-K Chaats in Ann Arbor, Michigan: The “nutrilicious” whole wheat paneer wrap is one of the many dishes painstakingly created with both health and taste in mind.

Many dishes in Rajendran’s menu are cooked by her American staff. “In my 32 years of living in America I have never discriminated [against] people based on their background. What matters is their willingness and aptitude for learning,” she adds. Chai Pani, too, is a melting pot for various cultures and has a mainly American staff. “Our town has very few Indians so my mother came from India to help train the cooks in traditional Indian cooking practices. Most Indians are in disbelief when they taste the daal made by an American cook that tastes like mom’s cooking,” says Irani. On some level this truly represents the diversity of India with its many communities and cuisines coexisting together. With pictures of Indian streets and vibrant colors enlivening their decor, these trendy establishments have also become places where the local community comes together for social and cultural enrichment. Rajendran offers cooking classes and cheese-making workshops where she teaches how to make paneer and mozzarella. Chai Pani also hosts cultural and musical events while Hut-K sets up a chaat stand just like the Indian street stalls during the summer months. “Culture for me is a sum total of your experiences. I try to support the local economy as I believe that if the local economy thrives, the entire community benefits,” says Rajendran. She also follows the triple bottom line company format where they focus on people, the planet and profit. While not generating any solid waste and not using canned food and informing her customers of the smallest details about sourcing ingredients from farms, she has treated Indian food with the respect that it deserves. “Our food is growing and I believe will continue to grow. People are learning the value of our spices like turmeric, cumin, and many more and realising how well balanced our meals are,” she adds. These restaurants are hoping that this changing face of Indian food is not just a phase but will continue to evolve and prosper. Monica Bhide, a widely published food writer and author of three cookbooks on Indian cuisine and spices, agrees that Indian cuisine is getting trendier. She cites the appearance of popular Indian chefs on American TV, such as Aarti Sequeira on the Food Network and Floyd Cardoz winning the Top Chef challenge. “I also think that the growing awareness of the health benefits of spices is really heralding a new era of Indian cooking in the U.S.,” she affirms.