IndiaScope: Freedoms and Our Discontents 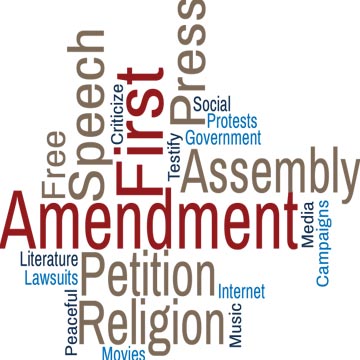 The tragic mass shooting at Stoneman Douglas High School in Florida gave rise to debates, passions, and arguments about rights and duties. It also prompted TINAZ PAVRI to think afresh about freedom.

Growing up in India, my generation sometimes felt unfree. Although our civics courses taught us reverence for the Indian Constitution with its wisely borrowed mix from East and West to include fundamental rights (justiciable) and directive principles (nonjusticiable), we knew that freedom was lacking for many. The most glaring lack of basic constitutional rights was, of course, evident in the plight of the lower classes, whose lives depended on the whims of state machinery that was always controlled by the upper classes. If the land they had raised their huts on was needed, they were removed from it. If the stall they sold goods from came under someone’s scrutiny, it was dismantled. If they were rounded up and taken away, justice was less likely to be served because they were dispensable.

For those of us fortunate enough to have been the “haves” in India, we chafed under different restrictions— those of societal rules and regulations telling us how to behave at every turn, what to think, how to be. We longed to go to an imagined “West” where we could be ourselves—women who could hang out alone at bars without censuring eyes and wear what they pleased without being shamed; boys who could choose to live with whoever without the bonds of marriage… just people who did not have the heavy specter of parents, aunties, uncles, and all of society always telling us what we should do. America became our shining star, beckoning us with the freedom to come and think for ourselves, do for ourselves, and be ourselves in ways that we couldn’t in India.

And indeed, America has paid a high price for its freedom, and its luminaries over generations have always warned against it being whittled away. Recently, my high school WhatsApp group, that source of endless delight, randomness, and nostalgia, shared a number of quotes by famous Americans from all walks of life, who warn against exactly such an erosion of people’s rights and freedoms, and who share a deep distrust of government. Consider these thoughts:

“…one useless man is a shame, two is a law firm, and three or more is a congress.” (John Adams); “Giving money and power to government is like giving whiskey and car keys to teenage boys.” (P. J. O’Rourke, journalist); “No man’s life, liberty, or property are safe while the legislature is in session.” (Judge Gideon J. Tucker); “What this country needs are more unemployed politicians.” (Edward Langley, artist).

And sure enough, when we came to the U.S., we soon realized that we had traded one set of restrictions for another. We had greater freedoms of expression—we could go anywhere, wear anything, live with anyone, not get married. However, we found that intrusion of government was constant and restrictive, and that even minor transgressions resulted in heavy penalties. Which tree can be cut, how long your grass can grow, whether your children can walk to school alone, all these were regulated. Not immediately acceding to police commands resulted in fatal shootings. And if the government wanted to come at you with its full force, the average citizen would be forced to plead guilty whether one was or not, because the government had the coffers to bankrupt you. At least in such realms, the India of my growing up was freer, bending laws that did not make sense. Hence it was we who decided whether that additional person would pile on to an already-full train, or at what age a cousin was old enough to watch over our children.

Perhaps the imperatives of the new millennium have created heavier-handed governments everywhere in the name of safety, enlightenment (with regard to environmental awareness, for instance), protection. There is no doubt that today both the U.S. and India have much more intrusive governments. In India a debate is raging over the linking of Aadhar Cards to just about everything, creating an Indian “big brother.”

In light of this constant push and pull of freedom and restriction, we can understand the passions on both sides of the gun debate: those who want to hold on to them really believe that someday guns will be what stands between them and a rogue government; those who want them gone point to the repeating and senseless loss of life that they facilitate. Both sides chafe to be more free.