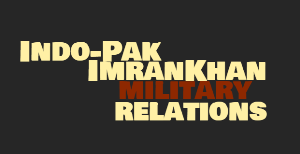 Although Khan recalls playing cricket in India with fondness, and although he and Modi have reached out since the election, any rapprochement would be tempered by the Pakistani military’s agenda, says TINAZ PAVRI. In fact, Khan cast aspersions on Nawaz Sharif, the former prime minister, for his close relationship with Modi in the run-up to the election.

On the face of it, Imran Khan’s victory in the Pakistan elections seemed improbable given that his political party, Tehreek-e-Insaf (Movement for Justice), was an outsider among the parties and dynasties that had dominated civilian Pakistani politics since independence.

However, he was aided by a confluence of factors that came together to bring him to power. Pakistanis, reeling under previous failed governments, embraced his outsider status. Khan the gatecrasher had for decades railed against the country’s corrupt elites and talked about relief for its impoverished masses. Pakistanis finally decided that they would take the chance, that perhaps he was someone they could trust and who would do more for them than the establishment had in previous decades. In that sense, he had widespread support. However, it is common knowledge that the military, the real king-makers, cleared the path for him. Nawaz Sharif, former prime minister and head of the Pakistan Muslim League, was jailed days before the election was held, and defectors from his party joined TEI. The omnipotent hand of the military, therefore, was not absent in this election and in fact is heavy enough to ensure that Khan will remain compliant.

So a seemingly game-changing election of an outsider with support among Pakistan’s masses, who have not seen economic improvement in their lifetimes as Indians have, actually may not have much impact on the larger India-Pakistan relationship.

Although Khan recalls playing cricket in India with some fondness, and although he and Modi have reached out since the election, any rapprochement between the neighbors would be tempered by the agenda of the military. In fact, Khan was not above casting aspersions on Sharif for his close relationship with Modi in the run-up to the election.

Another dynamic to consider is Pakistan’s flailing relationship with the U.S. President Trump has not only publicly called out Pakistan, much to the country’s indignation, but has recently announced the cutting of $300M in aid. This vacuum in the U.S.-Pakistani relationship has been filled increasingly by China, whose economic assistance and investment in Pakistan totals more than $60B. More importantly, Pakistan is in no position to pay back what it owes to China, strengthening China’s influence over the country. At the same time, the U.S. has purposefully moved closer to India and does not make a secret of viewing India as a bulwark against China in Asia. What we are starting to see, then, is a variant of the India-Pakistan relationship during the Cold War, when India was in the Soviet orbit and Pakistan firmly in America’s. In its current version, the U.S. and China are playing out their moves through the Indo-Pakistan relationship, leaving less room for the two countries to be able to maneuver within their own bilateral relationship.

Further, it is not entirely clear who the real Imran Khan is, nor what he believes about the India-Pakistan relationship. Is he the dashing, progressive, Oxford-educated cricketer who was known for his success with women and his fondness for partying in a rather un-Islamic way, or is he the newly-religious bigot who believes in dramatically restricting women’s rights and cozies up to the religious fundamentalists—Taliban Khan, as it were. If the former, the India-Pakistan relationship would stand a better chance, but all evidence in the past decade points to the latter. How will a new Prime Minister, who owes his election to the fundamentalists who oppose closer ties with India, actually move to advance such ties? And we are not letting India off the hook in this equation, as it has exhibited fundamentalism of its own in the policies and verbiage of the ruling BJP party.

Given the realities on the ground, it would seem that the India-Pakistan relationship in the wake of Khan’s election might remain in a state of stasis. All of the elements outlined above indicate that dramatic change is not likely. In the short term what would be best for the relationship is to wish for Pakistan stability and a respite from violence, a measure of economic success so that promises made to the economically-deprived masses might be kept, and some breathing room to see where the new winds are taking it.