The Marvelous Old Inns of Goa 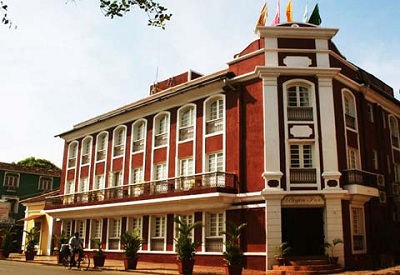 No doubt, there is all that for one to explore in this evergreen province. However, just a few intrepid travelers know that, beyond these well-trodden paths, there are also some places which are of great antiquity and historical value. A small area in Panjim, marked as the Old Latin Quarter—known as Fontainhas—is one such place. It is the historical heart of Goa. In this charming old neighborhood of Panjim, you can discover a whole town, where the Portuguese built their homes and lived until as late as the 1960s.

Panjim, the headquarters of Goa, is a city of gardens, with beautiful red-tile roof buildings, tree-lined avenues, temples, churches and statues, situated on the banks of the river Mandovi. The Old Latin Quarter is a maze of narrow alleys lined with dozens of quaint little homes, villas and business apartments. It lies close to the left bank of Ourem Creek, within walkable distance from the city center.

Inherited from the Portuguese, many of the buildings here, including those belonging to the direct descendants of the Portuguese (as some of them still live here) have now been converted to an appealing potpourri of colorful, stylized inns and restaurants, offering tourists the best of Goan hospitality.

Most of these heritage inns look simple in their form, built in typical Portuguese style, with shuttered windows and overhanging balconies. Even their interiors exhibit little or no extravagance. However, since the old ways always interest people, they attract quite a few guests daily. It is because, as one German traveler remarked, “I feel a certain nostalgia for its past significance, that I come here every day for my meal.”

What impressed me most about these inns is the color. Each and every building here is painted with an exultant clash of eye-catching hues—ranging from the traditional red-ochre to deep yellow, purple, green, blue, almost any color under the sun for that matter—which is because of the tradition that all the buildings should be color-washed every year after the monsoon. The brilliance of these colors is what rivets your attention as you stroll through the cobbled streets of the Latin Quarter.

It would not be surprising to say that some of the inns have become recognized landmarks in the town and continue to inﬂuence and enrich the history and romance of this place.

History attributes Goa’s founding to the Portuguese seafarers in the year 1510, after Vasco da Gama found the sea route to India in 1498. That was the period when the Portuguese became one of the world’s chief maritime powers, when her seafarers set sail making a series of discoveries. They were the ﬁrst European voyagers to set foot on the west coast of India, followed by the French, Dutch and later the English.

The Portuguese voyager-poet, Luis de Camoes in his epic, “Os Lusiadas,” which he is said to have composed some 70 years after Vasco da Gama found the sea route to India, immortalized Portugal’s great period of discovery and colonization of Goa. One can see this poet’s mammoth statue now standing in the main hall of the museum, in old Goa.

The colonization of Goa by the Portuguese continued for almost four and a half centuries, until the liberation of Goa in 1961.

It is because of their long presence that the Portuguese could inﬂuence Goa’s social and religious life, and nowhere else is this impact more clearly visible than in the Latin Quarter, where several homes and churches built during their colonization still retain the reminiscences of the past. Not just that, the enduring Portuguese inﬂuence is reﬂected even in the contemporary language the people speak here and the way some women wear their party dress.

The name “Fontainhas,” apparently of Portuguese origin, probably derived from the name of a similar place existing in Lisbon, here means “place of small fountains” or public faucets, that the Portuguese built. Since there was no piped water supply in those days, women mostly depended on these fountains to ﬁll their water pots.

As the town grew, many of these fountains – except the one that I could locate later at a small square near a school—gradually disappeared. All the heritage inns of the Latin Quarter are of the same genesis and are conserved by the sustained efforts of their owners.

Perhaps it is for their picturesque aspect or for their historical association that these inns are well preserved. The innkeepers are fully aware of the substantial advantage they derive by preserving the antique character and ambience of their premises to reﬂect the atmosphere of the old days.

The ﬁnest example in this aspect is Panjim Inn, one of the most recognized landmarks in the town, situated on the Ourem Creek road, facing an arched walkover bridge

The red-ochre pigmented Panjim Inn retains much of its ancient character and traditional Goan ambience. Its kitchen serves both local and continental cuisine at its vintage verandah restaurant. Built in 1880, this elegant structure was home to an elite Hindu household. It also served as a school for some time, before being converted into a hotel.

Not all the inns are as big and reputed as Panjim Inn. There are also some smaller ones, noisy and bustling with the locals sipping the local beverage ‘Fenni.’

While on my way back to my hotel, I paused at another small square near the St. Sebastian chapel. The Afonso Guest House, standing right under the shadow of this chapel, is an interesting structure. Painted in deep yellow, it stands in striking contrast to the pearly white of the chapel. Named after Portugal’s ﬁrst king, Afonso Henriques, Afonso is owned by Mrs. Jeanette Afonso, who claims to be a direct descendant.

These heritage inns may not be of the glamorous type, but still you can be certain about the real, homely comfort they offer, and no doubt, some of them are scrupulously clean and green.

While trudging along the alleys of the Old Latin Quarter, the desire to discover the charm of a bygone era is strong. It is like taking a step back in time and reminds one of what the place was like in the olden days.

Why do old ways interest people more? This, one will understand only when one has taken a leisurely stroll through this old part of the town.

[The author is a noted writer and lensman.]