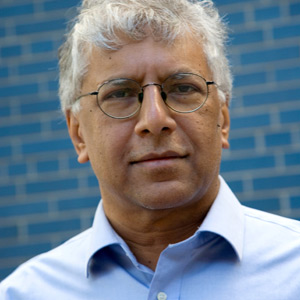 Vijay Seshadri became the first Asian American to win the Pulitzer Prize for poetry when his third collection, 3 Sections, won the award this year. Seshadri sat down with Khabar over the Labor Day weekend during the Decatur Book Festival, where he read his poems and was a featured speaker alongside poet and Emory University professor Kevin Young.

Even though I’m an immigrant, the angel with the flaming sword seems fine with me. He unhooks the velvet rope. He ushers me into the club. —Vijay Seshadri

Hailed by one of the judges as “a compelling collection of poems that examine human consciousness . . . in a voice that is by turns witty and grave, compassionate and remorseless,” Vijay Seshadri’s 3 Sections explores the ages and stages of life, family, and identity.

Seshadri was born in Bangalore in 1954 to Tamil and Kannada speaking parents. His scientist father moved the family to Ottawa, Canada, in 1959, and then to Columbus, Ohio, in 1961, where he assumed a teaching position at Ohio State University. Young Seshadri proceeded to have what he has called a classic Ohio boyhood, until the family moved to suburban Pittsburgh where he completed high school.

After graduation from Oberlin College, Seshadri, a spirited and adventure-seeking 20-year-old, went west, where he spent five years in the fishing and logging industry. After deciding he wanted to be a writer, he began a Masters of Fine Arts in creative writing at Columbia University. Today, Seshadri, a professor at Sarah Lawrence College, lives in Brooklyn with his family. His work has appeared in The New Yorker, the Paris Review, Yale Review, AGNI, and many other publications.

First off, congratulations on your Pulitzer Prize. Was a Pulitzer ever in the realm of your literary fantasies?
I was quite surprised. I found out that I won on the first spring weekend in April after a rather harsh, snowy winter in New York. I was scrambling to prepare for my week’s classes when I got a call—first from my editor, then from the New York Times. And of course, I didn’t do any more work the rest of the day!

What are your early memories of living in Columbus? Was there much of an Indian community prior to the Immigration Act of 1965?
There was no community. There were a couple of other Indian families, but they lived further away. And those families were from other parts of India, with different languages, customs and foods, so we didn’t have much in common. The only place we could buy Indian groceries at that time was in Kalustyan’s on Lexington Avenue in New York City. My father, mother, sister, and I would pile into our Chevrolet station wagon every summer and load up on Indian groceries—huge bags of dal, rice, and chilies—before driving back to Ohio. And when we ran out of Indian groceries, my mother would compromise by using yellow split peas instead of toor dal. This was the kind of isolation we experienced as Indians, a sort of pioneer life where we had to rely only on ourselves.

And in 1968, when you and your family moved to the Pittsburgh area, were there more Indians?
After the Immigration Act of 1965, there was definitely a burgeoning Indian community. My parents are still involved with the Indian community there, and our Pittsburg area friends contacted me after I won the Pulitzer to congratulate me.

At what age did you start writing poetry and who were some of your favorite poets?
I was sixteen. Like a lot of young poets, I started writing secretly or semi-secretly. I continued to write poetry while attending Oberlin College, and during the eight years of post-graduation when I lived in Oregon and worked in the fishing industry. My favorite poets were Gary Snyder and Galway Kinnell. W. B. Yeats was particularly significant to me in my teens. I was captivated by his musicality and depth.

Were you reading any Indian writers at that time?
Aside from the work of R. K. Narayan and Rabindranath Tagore’s Gitanjali, I read ancient texts such as the Bhagavad Gita and the Upanishads. As an adult, I also learned how to read Urdu—so I read some poetry in Urdu.

When did you pick up Urdu?
Because I had not been physically connected to the subcontinent since I was very young, I had become interested in South Asia, particularly the politics of Hindu-Muslim relations, secularism, communalism, and partition. So I spent a few years in Lahore, Pakistan, while working on a Ph.D. in Comparative Literature through Columbia University. Though ultimately, I decided not to complete the dissertation.

How did your parents, particularly your scientist father, feel about your decision to pursue a graduate degree in writing?
My choices caused them consternation and alarm, but my parents were never the kind of parents who coerced or demanded that my sister and I follow a specific course of study. (My sister ended up becoming a social worker.) “Though my father did suggest that I pursue computer science, my parents were progressive and fairly assimilated, and our family was very much a part of the American milieu. But I became a token of warning to all of the other Indian parents—look what happened to Seshadri’s son!”

But there’s another cultural issue at work here. My parents had adopted this very Western notion of individualism, as opposed to the Indian fundamental unit of consciousness—the family. I think this is rooted in the fact that my parents came out of their own oppressive Indian family situations and they didn’t want that for their children.

What else have you written?
I’ve written some short stories and personal essays. My essay entitled “My Pirate Boyhood,” in the September 1998 issue of Three Penny Review, is about growing up in Ohio as an Indian immigrant. Perhaps I’ll put together a collection of essays in the future.

You’ve been teaching at Sarah Lawrence College for sixteen years. How do you balance teaching and writing?
On teaching days I can only teach, because at Sarah Lawrence we have a tutorial system (small seminars). But sometimes the days I teach are the days I get the best ideas to write. Although I may be able to schedule my activities in the world, I can’t schedule what’s going on in my mind.

You’ve said in the past that as an immigrant, you experience a panoramic view of society? What did you mean by that?
If you are an immigrant, the immigrant experience bears down on you in a particularly intense way. You have the benefit of seeing the whole of society because there’s no part of society for which you naturally fit. But you can kind of grasp the whole because you are outside of it. You have a point of view, a place of perspective, which allows you to look at multiple facets from a distance, and see American society as this globe that is constantly revolving in front of you. You look at a city from an airplane 10,000 feet in the air, as opposed to walking around in the city.

But I think there’s an analogy to being an immigrant and being a human. The essential existential nature of our humanity is that we are not at home in the world. We’re all a little too big for the environment and we’re a little too small for it. And narrative is the making a whole from these differences, these fragments, and the shaping of this perspective.

Anjali Enjeti, an MFA student in creative writing at Queens University in Charlotte, is an Atlanta-based freelance writer and a staff writer for ArtsATL.