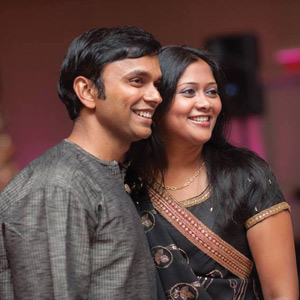 For most Indians, marriage is an important milestone in fulfilling one’s destiny, a sacred pact that is laden with the weight of a centuries old culture. What is passé, however, are arranged—read parentally approved—marriages. So where does a young (or not-so-young) South Asian turn to while searching for a life partner? Where one searches for everything else, of course—the Internet. From the older matrimonial websites to newer matchmaking apps and online dating, a host of Web-based options have been popular—albeit with mixed results.

Reports claim that online dating works because algorithms match users’ data points to others with similar attributes. More than a third of marriages between 2005 and 2012 began online, according to research at the University of Chicago. Indians typically use niche sites catering to traditional categories like religion, caste, income, and family background to arrange marital partnerships.

Ruksana Hussain, 34, from Atlanta, met her husband, Rafiq Batcha, 39, on Tamilmatrimony.com. Her advice to other hopefuls is:  “Build initial trust and then be really honest.” Building a relationship, especially over long distance, requires patience, honesty and quality pictures, Batcha adds. Also, look for someone who has written their own profile instead of one written by their parents, both Ruksana and Rafiq recommend. It shows genuineness in their commitment to find a lifelong partner. Their advice for success when using online sites is to check attributes that are genuinely important because it is matching those that lay a good foundation.

Both turned to online matchmaking because their choices were too limiting in their respective places. Though she was born in India, Ruksana grew up in Oman and thus, she placed importance on worldliness and her future mate respecting her need to work or study after marriage. Her family vetted “a lot of marriage proposals,” though there was not one she felt she could be happily ever after with. Rafiq, who was earning a MBA at Emory, explained his decision to search online, “[he] had almost zero chance of finding a Tamil Muslim girl in Atlanta.” So he wrote an online profile to forgo the traditional marriage route. Three months after their initial email exchange, Rafiq and his family flew to Chennai to meet Ruksana and her parents. They spent 24 hours together over three to four days and decided to marry. Their mutual decision to marry was just the beginning in the marriage test—juggling their parents’ wishes on where to marry, which marriage rituals to incorporate were major hurdles to overcome before they tied the knot a year and half to two years later. Overcoming challenges before even arriving at the marriage mandap built a strong foundation for Ruksana and Rafiq to use as they began intertwining their lives together.

Clearly, even in the brave, new world of online matchmaking, there is no one path to success in finding the right life partner.  With their algorithm based software, matchmaking apps may help speed up the initial process of checking out likely partners. At some point though, the best of apps must necessarily give way to real life meetings among likely couples. Enter a solution that harkens back to older traditions, but dressed in modern sensibilities—the matrimonial convention. Designed for singles to meet, mix and mingle with like-minded potential partners, matrimonial conventions are now par for the course among several South Asian communities in the USA. Speed dating sessions and the fact that most of these conventions now primarily cater to the suitors themselves and not the parents, give them a modern twist making them quite attractive for the young professionals, who are done experimenting and are ready to settle down in a relationship with marriage in mind.

Savan Patel, 25, who attended the Matrimonial Atlanta event organized by the Gujarati Cultural Association of North America, showcased an open attitude in meeting his significant other. The NJ native “liked his chances” with the over 220 people in attendance. In its ninth year, the all-volunteer organized event is an evolution of a new concept in marriage matchmaking: semi-arranged marriages. Do they have a decent ‘success rate’?  Matrimonial Atlanta produces 8-10 weddings annually. Clearly, it’s still a low probability game.  On the plus side, what differentiates matrimonial conventions from online platforms, is that these face-to-face events yield a more serious attitude to commit amongst attendees.

A 32-year-old San Francisco resident who has been in the online dating world for 12 years says, “Offline dating [such as meeting events] is drastically different than online dating because it aligns mindsets and demographics.” He continues, “Online dating is [akin to the] roulette’s wheel, of clicking and picking; there is no surety of someone’s readiness to settle down. This event takes away the chance of getting burned because someone is commitment phobic; it ensures everyone is on the same page.”

For some, these events do lead to further communication, culminating in marriage and children. Matrimonial Atlanta has had many success stories adding to tangible data that the semi-arranged matchmaking model does work. Experts have studied how the framework for an arranged marriage–similarities in belief systems and equality in finance, education and world view – have led to an all-time leading low (though debated) 4% divorce rate. Among the experts is Robert Epstein, a senior research psychologist at the American Institute for Behavior Research and Technology in Vista, California, and author of a new study, “How Love Emerges in Arranged Marriages.” In an email interview, Dr. Epstein commented that although not all culturally niche matrimonial events lead to successful unions, “marriages conducted through strong cultural rituals are sometimes successful because the couple feels that the commitment is very strong – unbreakable, in fact, and from that point on, the marriage is supported by parents, extended family members, and members of that culture.  Everyone works hard to try to make the marriage work.”

A happy blend of tradition and modernity 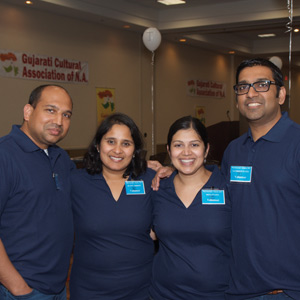 It is this collusion of familial consent and matchmaking organization that has powered Matrimonial Atlanta’s success stories. In 2005, the event’s inception year, Munjal and Happy Shroff met over a breakfast of upma and chai. Happy came from New York in an effort to relieve the “nightmares and anxiety” of finding the right lifetime mate. Munjal was content studying to be a psychiatrist in Atlanta, but when his father, “a man of few words” said, “If you go to this [matrimonial event], we won’t bother you [regarding marriage] again,” Munjal explained that he had to acquiesce to his parents’ wishes. It turned out that Happy and he were 1:1 matches: they both ranked each other #1 to have a 10 minute discussion in the next round. After the event, even though they both felt a connection, Happy had to initiate communication by calling Munjal first. The rest, as they say, is history. Happy and Munjal married eight months later, have two children and have settled in Smyrna, Georgia.

Juggling their individual careers – Happy is a teacher and Munjal, a practicing psychiatrist – with raising two children, this couple takes time to volunteer every year for Matrimonial Atlanta as coordinators. “When I give advice to my group during the event, it’s to keep an open mind and make the effort to expand on the connection,” Happy Shroff says. “I like to tell my group of guys that things change in a blink of a moment. Take the time, connect and be present. The face-to-face interaction is crucial and you never know that it may lead to something more,” Munjal adds.

Volunteering at Matrimonial Atlanta is also important to another busy, successful couple who met at the event in 2006. At Sandeep and Hina Patel’s first encounter “there was no instant connection,” recalls Hina.  Love kicked in after a concerted effort to progress the relationship and even so, “we went through a lot in the first years of our marriage,” Hina continues. “But knowing we had our family’s support made it easier to endure the tidal waves that married life can bring.”  Brian J. Willoughby, an assistant professor in the School of Family Life at Brigham Young University agrees, “Not only do parents provide emotional support for either partner, they also give valuable resources for couples as they navigate the marital transition.” (NY Times, “Modern Lessons From Arranged Marriages”, Jan 18, 2013)

“I believe the key for us is communication. Not relying on social media to make contact, instead we called each other and met again pretty soon after the event in Atlanta,” says Sandeep. This is also the advice he gives when volunteering as an event group coordinator. His wife adds that she advises women in her group, especially those who reach the mid-30s “crisis age” that she “wants to be part of the solution.”  “Society can be so judgmental and I make sure to tell my group that I’m here to support them and help in the process.”

While couples may meet in varying situations, the real truth to building successful marriage is old-fashioned commitment and hard work. Hina Patel summarizes it best, “What you put into it is exactly what you get out of it.”