Home > Magazine > Features > Kirtan East and West: Chanting the names of God in India and America

Kirtan East and West: Chanting the names of God in India and America 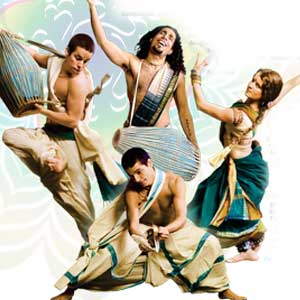 In yoga centers all over America, people gather with a few instruments, usually harmonium, guitar, and/or tablas, and sing kirtan: musical chanting of the Hindu names of God. Once these places taught only the physical postures of hatha yoga; now they are expanding to teach Americans the sacred chanting of bhakti yoga. These same people will also go to medium-sized concert halls by the hundreds (or even thousands) to hear (and sing with) the big names of kirtan—Jai Uttal, Deva Premal, Krishna Das, David Stringer, Suzanne Sterling. Jai Uttal has made an introductory album for young people called Kirtan Kids, which features his six-year-old son Ezra and a chorus of children. The annual Bhakti Fest in Joshua Tree, CA attracts ten of thousands for four continuous days of kirtan and hatha yoga.

For the people who sing kirtan, it is often one of the most important things in their lives. What motivates these people to have so much commitment to travel for miles to sing simple tunes in a dead foreign language with friends and strangers? Why is this any more compelling to these people than campfire songs, or the old Sing Along with Mitch television show?

I actually don’t have to ask “these people,” because I’m one of them. I find this rather surprising. When I was a bar musician, one of my first stirrings of artistic conscience was when I turned down a gig because the owner wanted me to lead sing-alongs. But there is something that happens when you chant these mantras that I, at least, can’t get anywhere else. When I saw the Robert Duvall movie The Apostle, or went to my brother’s church during his brief fling as a “Jesus freak,” I couldn’t help wishing that there was some way I could experience this religious intensity without voting Republican and opposing gay marriage.

Kirtan is basically gospel music for Hindus, and enables those of us who have left the Abrahamic tradition to use ecstatic singing as a way of achieving contact with whatever we want to call the transcendental essence. That doesn’t mean that my relationship with kirtan is completely paradox-free. Because my own kirtan band is starting to get gigs and record demos, I’m now having to deal with the ambiguous distinction between kirtan audience and kirtan performers.

As an audience member, I sing my heart out, and don’t worry about the fact that I’m not primarily a singer. But as a performer, I can’t stop worrying about technique, even though I know that technique is definitely not what this music is all about. Does that mean that I should stop worrying about tempo and tuning? Karnamrita Dasi tells this story: A great Indian singer told the doorman at a Krishna temple to stop singing kirtan, because he was wounding the raga and singing out of tune. The next day the eyes of the Krishna statue had turned red because he couldn’t sleep without hearing the doorman’s clumsy but heartfelt singing. Nevertheless, Dasi has a beautiful voice, and her kirtan albums are skillfully produced.

Kirtan Nation, the Sounds True compilation CD, reveals that the best kirtan musicians are both accomplished and creative. Musicians naturally want their music to sound good, and to take their music in new directions. But how far can you travel in new directions before you’ve lost your way? When is Kirtan no longer Kirtan? Deva Premal is perhaps the most popular kirtan artist, but she often sounds to me like smooth jazz with Sanskrit lyrics. Kirtan usually makes some sort of musical nod to its Indian roots. Harmonium and/or tabla is used in almost all live concerts, and guest solos by Nepalese bansuri player Manose are very popular on recordings. But is this enough to make sure that kirtan remains a manifestation of bhakti yoga, and not just a recent trend in Lite Rock music?

Kirtan takes many forms in India. The Sikhs have their own unique form of kirtan based on verses from their sacred text, the Sri Guru Granth Sahib. Each verse is associated with a specific Hindustani raga, and Sikh services traditionally include chanting those texts in those ragas accompanied by tablas and harmonium. This tradition has emerged in American popular kirtan through the mother and daughter duo of Snatam and Prabhu Nam Kaur. The primary source for Hindu kirtan, however, is Vrindaban, which tradition names as the place where Vishnu took his earthly form of Krishna. “Vrindaban is a regular kirtan factory” says Gangadhar Gerhard. “Walking through the streets in the evening, the sound of kirtan spilled out from homes on every block. I was struck how this was not about music. There was always some out-of-tune old man croaking at the top of his lungs. It was all about devotion, expressing what's in your heart, not about making beautiful sounds. It opened my ears and my heart in a way Western music had never done.” Many other Americans came to Vrindaban to study bhakti yoga with Neeb Karori Baba, including Richard Alpert ( AKA Ram Dass), Jai Uttal, Krishna Das, and Bhagavan Das. It was also where A. C. Bhaktivedanta Swami Prabhupada studied and wrote before founding the International Society of Krishna Consciousness (ISKCON), popularly known as “the Hare Krishnas.”

For many Americans, the Hare Krishnas are an annoyance or a joke. Hearing kirtan while trying to recover lost luggage at an airport is not likely to be a profound experience. This shows the wisdom behind the Transcendental Meditation strategy of keeping each personal mantra secret, and chanting it only during meditation. Nevertheless, ISKCON has produced a community of devotees with a flourishing second generation. Karnamrita Dasi was the second child born into the American ISCKON community, and today she not only sings Kirtan beautifully, but also eloquently explains the principles of bhakti yoga to her audiences. The Mayapuris are a group of charming young people who grew up singing kirtan together in an ISKCON community in Florida, and today perform and teach all over the world. Unlike most contemporary kirtan groups, they rely primarily on traditional instruments, including the barrel shaped mridangam that most Westerners associate with “the Hare Krishnas.” The Mayapuris told me, however, that they only play in airports if their flight to a workshop or concert has been delayed. I have no doubt that their youthful enthusiasm actually manages to convey the spirit of kirtan even under those conditions.

The Americans who studied in Vrindaban with Neeb Karori Baba are among the most prominent Western teachers of bhakti yoga and performers of kirtan. The one who still remains in Vrindaban today is Shyam Das. “Shyam Das chants and studies for hours in a hut with cow dung walls on a mountain,” says Karnamrita Dasi. “Every evening at sunset, he walks around this mountain in the sandy soil with no shoes, through peacocks, monkeys, and sadhus who live permanently outside. Everybody walks by and says only “Radhe Radhe.” No other conversation occurs, because everyone knows that this walk is a spiritual pilgrimage.” When Shyam Das performs, he makes no concessions to Western audiences. Most Western kirtan performers sing each melodic phrase twice, and have back up singers to accompany the audience, so that everyone has a chance to learn the Sanskrit. Like most Indian kirtankars, Shyam Das simply sings the melody while accompanying himself on harmonium, and lets the audience join in whenever they can. He has written numerous books on the history and philosophy of bhakti yoga, which he sees as a unique spiritual path. “Unlike Buddhism, bhakti yoga does not combat detachment, but rather cultivates a lover-like attachment to a personal god. And unlike Christian prayer , bhakti yoga does not involve making requests from God. Bhakti yogis simply praise God and ask nothing in return but the right to love him.” Does his scholarship and love of tradition make Shyam Das critical of the new developments in American kirtan? Quite the contrary. Shyam Das is revered as a teacher by Western kirtan artists, and performs with them in his traditional style on the same stage at the annual Bhakti Fest.

“Kirtan is always changing. It changed when it traveled from Uttar Pradesh to Bengal, and now New York kirtan is different from Los Angeles kirtan. Deva Premal is a close friend and frequently studies with me in Vrindavan. I tell her and all my Western students that changes in style don’t jeopardize kirtan, only changes of heart. The only thing that’s wrong is when someone sings without an understanding of what kirtan is supposed to do for you. Kirtan cultivates a longing for the Supreme, and if the singer sings while feeling that longing, it is authentic kirtan. Once at the Bhakti Fest, I even sang the old Motown song “I’m working my way back to you” because that expresses perfectly the essential message of bhakti yoga: the longing to return to the essential essence from which we came.” Source: India Currents.

[Teed Rockwell has studied Indian classical music with Ali Akbar Khan and other great Indian musicians. He is the first person to play Hindustani music on the Touchstyle Fretboard.]