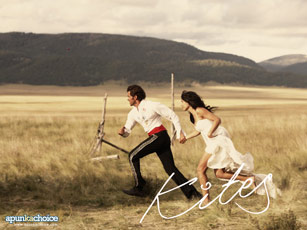 The international aspirations and overtures of Bollywood hardly make for a new script. What makes Kites, a Rakesh Roshan production released by Reliance BIG Pictures noteworthy is how it revs up this globalization of Bollywood a few notches.

Recently released across 2000 screens, including over 200 in the States, Kites stars Bollywood heartthrob Hrithik Roshan along with Barbara Mori of Uruguayan-Japanese and Mexican heritage in a romantic saga set on an international stage. Shot in Los Angeles, Las Vegas and Santa Fe by director Anurag Basu, Kites has stunts by Hollywood’s action director Spiro Razatos and choreography by New York-based Flexi with additional background score by composer Graeme Revell (Sin City, Grindhouse, and Pineapple Express).The English version titled Kites: The Remix, re-edited by Brett Ratner in collaboration with Mark Helfrich, his editor of the Rush Hour series, and X-Men: The Last Stand is trimmed from 130 to 90 minutes.

Yes, the new era of Bollywood cinema continues to make its way into mainstream Hollywood. Reaching out to the global viewer is the overriding theme of the current era of Bollywood. Movie directors are hiring internationally acclaimed actors (Ben Kingsley in Teen Patti), make-up artists (Christien Tinsley and Dominie Till for Paa), and stuntmen ( German stunt director Armin Sauer for Teen Patti).

The eagerly awaited Kites, however, is Bollywood’s maiden venture in presenting a full-length Hindi movie, complete with international actors and crew involved in various aspects of its making, to a worldwide audience.

Thanks to changing value systems and the rise of the multiplex culture in India, Hollywood’s influence on the Indian film ethos has been steadily increasing. Embracing realistic cinema are directors such as Madhur Bhandarkar (Page 3, Fashion) and Anurag Kashyap (Black Friday, Dev D). Directors such as Mira Nair (Monsoon Wedding) and Deepa Mehta (Fire, Earth, Water) have been attracting Indians living abroad as well as western audiences with movies that interpret India.

The success of Slumdog Millionaire opened new avenues, with Hollywood studios investing heavily (sometimes misguidedly) in Bollywood. While Hollywood studios are eyeing Bollywood many Indian investors are increasingly willing to bet on Hollywood, given its wider spectrum. Global Entertainment Partners will seek investors from Indian corporations as well as investors to produce American and international content. With commitments of over USD 1 billion in its Filmed Entertainment business RBEL’s motion picture brand, Reliance BIG Pictures has built an impressive film production slate in Hindi, English and other Indian languages, which it markets and distributes worldwide. In Hollywood, Reliance BIG Pictures has partnered with Steven Spielberg and Stacey Snider on the formation of DreamWorks Studios and has development deals with George Clooney’s Smokehouse Productions, Brad Pitt’s Plan B Entertainment, Julia Roberts’ Red Om Films to name a few, and more companies are following suit.

Hindi movies have always attracted the non-resident-Indian audience worldwide, but in recent times they have made their presence felt and even acceptable to an extent on the international scene. Not just that Aishwarya Rai has eased into Hollywood but sitcoms such as The Office and Big Bang Theory feature Indian characters and popular hosts like Stephen Colbert talk about the war between Amitabh Bachchan and Shah Rukh Khan! Even the daily soap opera Young and Restless, in a recent episode, had an Indian taxi driver playing the song “Tauba” in the background as a young police officer proposes to his girlfriend in a New York taxi.

No, the story of overcoming obstacles for love is not new, but the approach to movie-making that films like Kites reflect undoubtedly is. As a Hindi film in the global market, it is the culmination of a gradual progression of the thought process amongst Hindi movie makers, in particular, and a testament to India’s emergent economy, in general. Only time will tell if this trend will be a success on the international arena. In the meantime, Bollywood masala is ready to be served to the world palate, cooked to global tastes, of course.