Legacy: Journey of the Tiranga 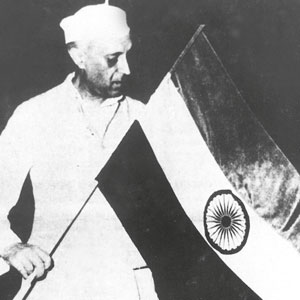 A long time ago, when land was not divided by national boundaries, people and clans used flags to identify themselves as a unit or a cult they be¬longed to. That piece of cloth hung on a struc¬ture or carried by leaders represented the ideals of the land and its people. As nations developed, the flag became more than a mere identification; it symbolized all that people valued and fought for. The ideals, goals, philosophy, hopes, achievements, aspiration and pride of the people gave the flag colors, symbols and de¬signs that encapsulated all the patriotic emotions.

Pandit Nehru presenting Tiranga to the Constituent Assembly on July 22, 1947.

The story of the Indian national flag is no different. Post 1857, the Indian independence movement gained momentum nationally and freedom fighters preferred to form organizations and come under a common flag, and so emerged the ideas that represented India. The elements used on previous In¬dian flags included the lotus, the charkha (spinning wheel), stars, and the crescent. Eminent freedom fighters such as Sister Nivedita (a disciple of Swami Vivekanada), Madame Bhikaiji Cama, Annie Besant, and Pingali Venkayya contributed to these flags to proclaim freedom.

The Indian tricolor or Tiranga eventually came into being on July 22, 1947, when an ad hoc committee of the Constituent Assembly adopted it as the national flag of independent India. Tiranga was subsequently retained as the national flagon India’s first Republic Day in 1950. The then Indian Prime Minister, Pandit Jawaharlal Ne¬hru, introduced the flag with a memorable speech, “Tryst with Destiny,” in the Constituent Assembly and moved the reso¬lution to adopt the new flag for Free India. 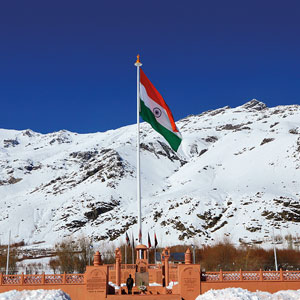 Describing the design and dimension of the flag, Nehru said, “The national flag of India shall be the horizontal tricolor of deep saffron (kesari), white and dark green in equal propor¬tions. In the center of the white band, there shall be a wheel, the Ashoka Chakra, in navy blue to represent the charkha. There are four colors: saffron, white, and green as principal colors, and navy blue of the Ashoka Chakra as the secondary color.”

In terms of values, saffron stands for courage, sacrifice, valor and the spirit of renunciation. The white stands for purity and the sun’s rays, and so de¬notes the path of light. The green is for growth and our relation with earth. The blue signifies the boundless sky above us and the fathomless sea below. The blue also implies inner energy.

After the official declaration of independence by the Constituent Assembly on the eve of August 14- 15, 1947, a group of 72 women led by Hansa Mehta presented the The Tiranga at the Kargil War Memorial in Drass, Jammu & Kashmir

Tiranga to Dr. Rajendra Prasad on behalf of the women of India, symbolizing the birth of the Indian National Flag. It was this flag that was hoisted on the Council House on August 15, 1947, at 8.30 am. Now in its 66th year, the Tiranga is still going strong, not just at home, but globally. 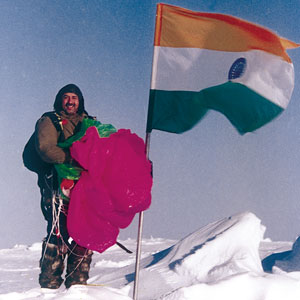 • The Parliament House in New Delhi is the only building in India where three flags are flown at a time, representing three distinguished office bearers: the Speaker of Lok Sabha, the Deputy Speaker of the Lok Sabha and the Chairman of the Rajya Sabha. Before 1958, when the Supreme Court was housed in the Parliament House, four flags used to fly over the circu¬lar building.

• On May 29, 1953, the Indian tricolor had the rare honor of being first hoisted on Mt. Everest along with the Union Jack and the Nepalese national flag by Sher¬pa Tenzing and Edmund Hillary, when they became the first men to climb the peak. So far, the Tiranga has gone up to  Mt. Everest 38 times.

• In 1971, the Indian tricolor, for the first time, trav¬elled in space on board Apollo-15. Cosmonaut Wing Commander Rakesh Sharma later wore it as a me¬dallion on his space suit during the Indo¬Soviet joint space flight in April 1984.