COVID-19  In-depth info for Indians in Atlanta/Georgia. Click here
Home > Magazine > Features > Americana: Looking at “A jury of your peers”

Americana: Looking at “A jury of your peers” 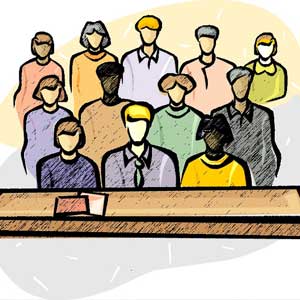 This month BILL FITZPATRICK muses about the flaws and merits of an American institution through his personal experience as a jury foreman in a case involving a sex-felon.

"Representative government and trial by jury are the heart and lungs of liberty. Without them we have no other fortification against being ridden like horses, fleeced like sheep, worked like cattle, and fed and clothed like swine and hounds."
— John Adams, 1774

The twelve of us walk single file out of the courtroom, take a few steps down a red-carpeted hallway and then enter a small rectangular room to begin our jury deliberations. As foreman of the jury, it is my responsibility to lead the discussions in the case of convicted sex-felon Mr. Williams versus the State of South Carolina. Mr. Williams has petitioned the court for early release from his state-required rehabilitation program. It is our job to weigh the evidence and render a decision.

“Let’s start with a show of hands,” I suggest. “How many believe that Mr. Williams should remain in the State’s custody?”

Eleven hands are quickly raised. In nearly all states, including South Carolina, jury decisions have to be unanimous.

What’s with all these hands? Did I miss something? Did the State of South Carolina really prove beyond reasonable doubt that Mr. Williams, if released at this time, was likely to assault more women?

“I don’t agree,” I offer, shocking the eleven. I attempt to explain why, but my scattered thoughts persuade no one. We adjourn for the day.

It was in early January when my ‘jury summons’ arrived in the mail. Serving on a jury is considered a ‘civic duty,’ right along with paying taxes, voting, and serving in the military. As Lawrence M. Friedman notes in Law in America: A Short History, ‘trial by jury’ is also distinctly American, rarely found in any other of the world’s legal systems.

The underlying basis of our legal system is English ‘common law,’ not surprising given that the British eventually controlled the original colonies. Similarly, the British exported both their language and legal principles to countries such as Australia, Canada, and India.

In common law countries, judges are often elected, and have much more leeway in interpreting the law as compared to ‘civil law,’ the legal system used by most of Western Europe. Civil law, with distant origins in the laws of the Roman Empires, is much more structured and specific. Judges are never elected. Jury trials are rare.

Once American Independence was achieved, our Founding Fathers were free to create a new form of rule, one free of the whims of kings and lords, and they did. The underlying legal system, while based on English common law, was modified to fit the needs of a representative democracy. For example, each state was given the power to create its own laws and governance.

In addition to these state-run judiciary systems, the federal system has responsibilities too, including the right to review decisions passed by the states that may be in violation of the Constitution. The tension between the ‘reach’ of the federal government and ‘state’s rights’ is as old as the Civil War, as topical as the Affordable Health Care Act and gay marriage.

“Good morning, fellow jurors. Before I share my views on this case, I have one request. Please don’t ‘tune me out.’ It is our civic duty to listen to listen to each other with open and receptive minds.

“To summarize, Mr. Williams has already served his prison term and is now in our state’s required rehabilitation program for sexual offenders. He has the legal right to petition for an early release from the program, and he has. Before dismissing us from the courtroom, the judge told us that the burden of proof is with the State of South Carolina. In short, the State has to prove beyond a reasonable doubt that Mr. Williams is likely to commit a similar crime in order to keep him in their custody.

“The State’s entire case rested on the ‘expert testimony’ of the director of the rehabilitation center. Her last meeting with Mr. Williams was nearly a year ago and it lasted 90 minutes. She spoke very highly of his progress, but noted three reasons why he should not be released.

“First, she said that within the last year Mr. Williams got into a loud verbal altercation with his roommate and that threats were exchanged. The roommate later withdrew the complaint. Second, a female counselor wrote a few case notes indicating that Mr. Williams did something that made her feel uncomfortable. Third, during counseling sessions, Mr. Williams is sometimes ‘guarded’ with his responses.”

I stop, and ask the group if I have accurately summarized the case. All agree that I have.

“So, the sum total of the State’s case is a verbal altercation, an unexplained case note, and the ‘feeling’ that Mr. Williams is sometimes guarded with his response. Is this really overwhelming evidence?

“Has anyone around the table not had a loud verbal altercation in the past year? In my view, we need to discard the incident concerning the female counselor because the State failed to present any details. We don’t know ‘who, what, when, or where,’ let alone Mr. Williams’ version of the story. And as far as the ‘guarded responses,’ well, who could fault Mr. Williams for that?

“Does anyone have an objection to my summary or analysis?”

“Then if we agree the evidence is useless, how can we deny Mr. Williams’ request?”

The male juror to my right answers.

“Because the State’s expert said she thought he should stay under the State’s care a while longer. That’s good enough for me.”

Most in the room nod their agreement.

“Well, ‘because she said so’ is not good enough for me,” I snap. “South Carolina law gives Mr. Williams an opportunity for appeal precisely because of the limitations and dangers of putting that much power in the hands of a single person. I’d like another show of hands. Who believes that the State should retain custody of Mr. Williams?”

Seven hands go up. Four people are now “on the fence.”

Yet, despite the shift, I sense I have lost. The seven will not be swayed, and in their unquestioned certainty I am frustrated and angry, because I want them to see beyond themselves, but they can’t or won’t. We are all white and Mr. Williams is black. How different might these discussions be if a few of the jurors were black? Were more educated? Didn’t confuse the opinion of an expert with the voice of God?

In his book, We, The Jury: The Jury System and Ideal of Democracy, legal scholar Jeffrey Abramson suggests:

The key point here is that we should seek to inspire jurors not to represent their own kind but to use their different starting perspectives to educate one another, to defeat prejudiced arguments, and to elevate deliberations to a level where power goes to the most persuasive. Jurors in real cases may seldom practice this deliberative ideal perfectly.

Abramson, while acknowledging the shortcomings that I am feeling in the jury room, is optimistic about the democratic aspects of the American jury system, and properly points to our progress over time. In his book he concludes:

The direct and raw character of justice make it our most honest mirror, reflecting both the good and the bad that ordinary people are capable of when called upon to do justice. The reflection sometimes attracts us, and it sometimes repels us. But we are the jury, and the image we see is our own.

We return to the courtroom. Mr. Williams, with his arms in handcuffs and legs in chains, is sitting next to his attorney. Yesterday, when he took the witness stand, he told us about the sexual acts he was forced to perform when he was five years old. Told us when he was six he came home from school to find his murdered father lying in blood. Told us when he was seven, he was sent to live with his grandmother, only to be subjected to more sexual abuse. Told us how as a teenager he did to others what others had done to him. How five years ago he decided to break the cycle of abuse and reclaim his life. His own expert witness, a psychiatrist with at least as high a standing in the profession as the State’s expert witness said, “Mr. Williams should be released.”

“Mr. Fitzpatrick, has the jury reached a decision?”