Home > Magazine > Features > Made in India 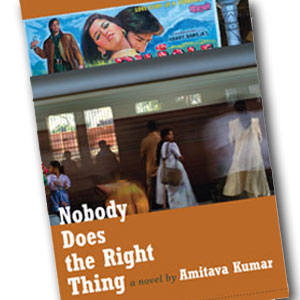 Binod, the protagonist in Amitava Kumar’s novel, Nobody Does the Right Thing, is convinced he’s not going to fall victim to the “tragedy of small-town ambition.” He remembers that Bollywood actor Om Puri once “told a journalist that in India there was poverty even of ambition. ‘Hamaare yahan iraadon mein bhi kangali hai.’” But as Binod will slowly discover over the course of this sharp and edgy novel, realizing one’s lofty ambitions is quite another challenge altogether.

At the novel’s outset we find Binod working as a journalist in a big city. Yet he struggles to present the small-town hardships and predicaments to the urban reader. “There were only so many times he could remind his reader that you could not understand the pain of the man who brought you your milk or drove your car unless you too needed to go back to your village every six months to find out whether the child who had four milk teeth last time had now learned to call your name when shown your photograph,” Binod remembers.

Then one of Binod’s news reports about the murder of a young woman in Patna, Mala Shrivastava, by her politician lover, catches the attention of Bollywood producer Vikas Dhar. Dhar commissions Binod to write a screenplay based on the real-life tragedy.

As Binod tries to carve the screenplay into something resembling reality, he finds he can’t quite do so. For one thing, when he visits home in Patna to find out more about Mala, Binod’s rebel cousin, Rabinder, gets in on the action and insists on contributing his own narrative to the story. Rabinder in fact even moves to Bombay and slowly upstages Binod, using his special brand of swagger. Dhar too is ever looking for more masala to spike the story with. The final screenplay, much to Binod’s dismay, has very little resemblance to the real narrative.

Tellingly, the novel’s cover shows a shot of what looks to be an Indian railway platform, with a poster of a Bollywood movie looming large over it. As the novel expertly shows, Bollywood’s effect on Indians looms large figuratively as well. Binod often wonders if “Indians were incapable of a sense of tragedy. They are rescued from having a single genuine emotion because of their attachment to melodrama. Knowledge comes to them only in the form of a film story with seven songs,” he worries.

It is easy to think of Nobody Does the Right Thing as a novel about small-town life in India and it definitely is that—it captures contemporary life in small-town Bihar very well. But Kumar’s novel is also about much more than a mere cataloging of sights and sounds familiar to many of us. By wonderfully chronicling the slow unraveling of Binod’s ambitions, it successfully shows us how idealism and lofty goals get diluted by the everyday reality of life in contemporary India. There’s a very real reason, Mr. Puri, for that much-lamented poverty of ambition.