Make in India or Make for India? 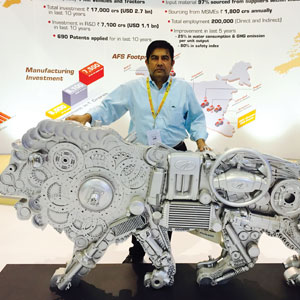 Reflecting on India’s growing manufacturing capabilities, ANI AGNIHOTRI offers his views on what the country should focus on in the coming years.

Prime Minister Narendra Modi launched the ambitious Make in India campaign last year, and Make in India Week (MIIW) was celebrated in Mumbai, India from February 13-18, 2016. According to MIIW’s official website, about 900,000 visitors, 65,500 participants, 11,000 companies, 215 exhibitors, and more than 100 nations participated in this weeklong conference and exhibition. The presence of 1,000+ national and international company CEOs was truly impressive.

Showcasing the potential of India’s design, innovation, and sustainability capabilities across India’s manufacturing sectors, MIIW took corporate and public participation to the next level. The government pulled out all the stops for ensuring a smooth sailing for this mega event. Apart from an accidental fire incident in an off-site venue for Maharashtra Night on February 14, MIIW drew all praises from domestic and international participants.

PM Modi has audacious plans to make India a manufacturing hub and offer the world an alternative (mainly to China). The goal is to have 100 million new jobs in six years, since about 14 million people enter the Indian workforce every year. According to Union Commerce Minister Nirmala Sitharaman, “Make in India is not a slogan but a mission to be accomplished by a single-minded commitment about new processes.”

The government of India has identified 25 sectors that would get incentives-support; policies are being aligned to boost investments in them. The sectors that would get special emphasis include those requiring moderate to low skills such as construction, textiles, and food processing, and skill-intensive sectors such as aviation, defense equipment manufacturing, electronics, etc.

To make this huge mission possible, India has to work in multiple directions: build open communications and confidence-building measures between industry (domestic and international) and government; and create a large skilled-labor workforce (only 12 percent of Indian workforce is skilled, compared to about 80 percent of Germany, Japan, and South Korea.

In 2015, the industry sector contributed 30.02 percent to India’s gross domestic product (GDP). While India ranks 7th in terms of nominal GDP in the world, it ranks a lowly 131st in terms of per capita GDP. If implemented correctly, the Make in India initiative will help to grow the industry sector rapidly, and employment will increase manifold. This will augment the purchasing power of India’s average worker, mitigate poverty, and expand the consumer base for companies. Besides, it may help in reducing brain drain and labor migration.

An export-oriented growth model will improve India’s balance of payments and help in accumulating foreign exchange reserves, which is very important given the volatility in the global economy with multiple rounds of quantitative easing announced by major economies. Foreign competition and investment will bring technical expertise and creative skills along with foreign capital. The resulting credit rating upgrade will further woo investors. The urge to attract investors will force government to change policies towards improving the ease of doing business in India. The Modi government will have to undertake groundbreaking economic, political, and social reforms to market Brand India globally.

Historically, environmental clearance has been a contentious issue for many projects. Land acquisition for industries is a prerequisite, bringing the eternal debate of development versus displacement. Arguably, Make in India is one of the most ambitious projects being undertaken, and is one that India truly needs to sustain its growth rate of 7 percent or more. With sound policies towards this end, it is possible to make India the leader in the manufacturing sector. But overlooking the world economic scenario may not bear well for Make in India champions. With the Japanese, European, and U.S. economies yet to fully recover from their economic crises, one needs to be cautious about the demand side of India. Perhaps “Make for India” should be an appropriate call at this stage rather than leapfrogging to a world’s manufacturing capital?

Atlanta-based Ani Agnihotri is founder and program co-chairperson of USA India Business Summit (UIBS) and President, IIIrd Millennium Technologies. His professional experience in dealing with business issues in the U.S. and India spans over two decades.