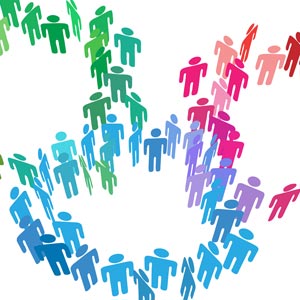 Pre-1965 class European-American immigrants, by virtue of their skin color, language, and religion, found it easier to assimilate than today’s African, Asian, or Hispanic immigrants.

“I am going to kick your brown…”

According to a 1980s study conducted by Dr. M.A. Gibson, such insults and threats were regularly hurled by the white students of a central California high school toward their Punjabi Sikh classmates. The school in question was located in “redneck country,” a backward place where white residents were hostile to outsiders, particularly brown-skinned Sikhs. According to the professor, there is even evidence to suggest that some of the teachers and staff joined in the discriminations. Combine this appalling environment with the general vulnerabilities of the teenage years, and it would not be at all surprising to learn that suicide rates among the Sikh youth jumped, dropout rates increased, and grades suffered.

But, that is not what happened.

Instead, the Sikh young men and women kicked it into high gear, earned better grades, and graduated at rates far higher than their white counterparts! How in the name of Waheguru did they overcome such great obstacles? For that matter, why do some immigrant groups quickly integrate into American culture? Why do some struggle?

Only in recent decades have sociologists turned their attention away from the assimilation experiences of our first-generation arrivals, to the complex world of the second and third generations, groups of young men and women who straddle their parents’ often romantic views of America, with, say, the harsh realities of redneck schoolmates. Before we review these complex questions—and I will do this by combining the sociologist’s data with a few personal stories about my experiences with African, European, Hispanic, and Indian-American immigrants—it might be helpful to first consider the findings of a recent Pew Research Center study:

Hispanics and Asian Americans make up about seven-in-ten of today’s adult immigrants and about half of today’s adult second generation. Second generations of both groups are much more likely than the immigrants to speak English, to have friends and spouses outside their ethnic or racial group, to say their group gets along well with others, and to think of themselves as a “typical American.”

Several years ago, an African-American friend of mine asked me to join him for an after-work drink, not in the convenient “white bar” across the street, but in a “black bar” located in downtown Greenville. I agreed, and in less than a half hour I am listening, as my friend, Ben, unloads. Tells me he feels “gray,” that is torn between the world of his well-educated white friends, and the world of many of his less-assimilated black friends. Tells me how as a young boy he was ridiculed by some of his black friends because of his good grades in school. Tells me how his parents—both of whom were teachers—emphasized the importance of education. The bartender, a stooped old man named Gramps, kept pouring bourbon, Ben kept talking, and I kept listening.

Until that evening, I thought all Americans wanted to study hard, work hard, and provide a better life for the next generation, in short, live the American dream, but that was not true that night when Ben and I talked, and it is not true now. Disproportionate numbers of African-Americans have ample reasons not to believe in the American dream. And, as sociologist Dr. Min Zhou points out, this cynical view of America can have a profound impact on assimilation outcomes. If new arrivals from say, India, are forced to live in poor, inner-city neighborhoods, it is likely that their sons and daughters—the second generation—will hear the message that America offers no hope, no opportunity, a view in complete contradiction to the beliefs of their parents.

My parents were never able to quite determine exactly when their parents and grandparents traveled to the United States, but we are sure that it was the era of the horrific Irish potato famine, a decade-long period of time from 1845-1855 when the Irish starved and their British landlords demanded their rents. As many as a million Irish immigrants made the brutal passage to America, many aboard vessels named “Coffin Ships,” so called because of the number of people who died in the miserable, filthy, and overcrowded conditions. Those who survived staggered off the ships, only to find that America wanted nothing to do with the Irish or their Catholic religion.

But like the Punjabi-Sikhs, we survived, and prospered. Ahem! Even President Obama claims an Irish heritage!

First generation Irish-Americans toiled like slaves to build the nation’s railroads. In the second generation, we were cops and teachers. By our third generation, we had earned a place in American society. But this assimilation model—immigrants arrive, accept the lowest and most demeaning jobs, and expect that their sons and daughters will have a better life—is limited, in that it is white-European-centric. As Dr. Zhou notes, “The process of assimilation depended largely on the individual decisions to leave the immigrant culture behind and embrace American ways. Such as an advantage does not exist for black, Asian, and mestizo children of today’s immigrants.”

In short, pre-1965 class European-American immigrants, by virtue of their skin color, language, and religion, found it easier to assimilate than today’s African, Asian, or Hispanic immigrants.

Several years ago, I walked into our Irvine, California, office in order to thank one of our technicians, Nabor, for his fine work on a recent service call. I had never met Nabor.

“I’m looking for Nabor. Could you point him out to me?”

“You mean my uncle!”

I met Nabor and thanked him for his outstanding work. Nabor told me that when he applied for a job with our company, he was told that all of the interview slots were taken. He showed up at 8:30, anyway, in the hope that he might be given an interview. He waited all day. Finally, he met the hiring manager and said, “Please, just give me a chance.”

“How did you end up in this country?” I asked Nabor.

“In the 1970s, my parents came across the border from Mexico. We were ‘illegals,’ and that made it hard to find good work. Our lives really improved in 1986, when President Reagan granted us amnesty. Today, I consider myself so fortunate to be an American citizen.”

I did not ask Nabor or Hector about their school days, but thanks to a 1985 study of a mostly Hispanic California high school, we can gain some insight. Teachers described newly arrived Hispanic immigrants as very serious about their schoolwork, respectful, eager to please. The next grouping of Hispanic students was bilingual, proud of their heritage, high achievers in school. Chicanos, the largest Mexican group, were mostly second- and third-generation students whose primary loyalty was to the group, seen as locked in conflict with white society. Teachers considered them “irresponsible,” and “disrespectful.” To act “white,” that is, to get good grades, was regarded as disloyalty to the group.

We take our leave of Ben and Bill, Hector and Nabor, and return to our second-generation Punjabi-Sikhs. How did they overcome the disadvantages of poverty, race and religion, against the backdrop of a redneck community?

According to Gibson, Sikh parents pressured their children against too much contact with white peers who may “dishonor” their families. They defined “becoming Americanized” as forgetting one’s roots and adopting the most disparaged traits of the majority, such as leaving home at age eighteen, or making decisions without parental consent. At the same time, parents urged children to abide by school rules, ignore racist remarks, and study hard. Finally, Sikh families lived in their own neighborhoods, separate and distinct from the negative influences and messages of America’s disenfranchised citizens.

Today, instead of picking fruit in someone else’s orchard, they “own the orchard.”

Now how cool, how American, is that?