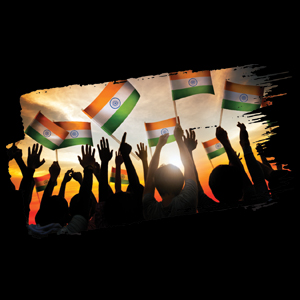 The lilting notes of Ae Mere Watan Ke Logon by Lata Mangeshkar wafted in the air. I’d heard it multiple times on the radio. But as I heard it that day, it had a different effect on me. It was the morning of January 26, India’s Republic Day.

It was a holiday and everyone in the community had woken up early and gathered in the park. It was one of the few occasions when we children did that voluntarily. We were here because we knew that at the end of the event, we’d all be given tiny paper boxes holding motichoor laddoos. We weren’t huge fans of laddoos, but the ones that were handed to us this day by the head of our local Residents’ Welfare Association tasted different and delectable—just like the song, which too had a different ring to it that day.

We took turns performing on the tiny makeshift stage that had been set up for the day’s celebrations. A few of us danced to Indian folk songs, others read out heavy-duty essays on patriotism, and many just sat around waiting for the laddoos. A sumptuous lunch was served—fluffy puris made on the spot and served piping hot along with potato curry and mango pickle. Our community aunties were busy making sure everybody had the puris while they were still fluffy, crispy, and soft.

The song, which had been playing on the two speakers set up in the park at the end of the event, stayed in the air for a long while, even as everyone said their goodbyes. The lyrics of the song and the voice of the singer began to cast their spell on me. I was too young to understand it wholly, yet I felt a slight lump in my throat. Having heard multiple glorious stories about Lata Mangeshkar’s voice and talent, and being familiar with how this song moved Jawaharlal Nehru to tears in 1963, I knew the significance of the words being sung.

We were moved even if we were not grown-up enough to know what goodbyes at the border must have meant. Jab ant samay aaya to / keh gaye ke ab marate hain / khush rehna desh ke pyaaron / ab ham to safar karate hain. But we knew enough to understand that this is one tale that we need to remember and express gratitude for. Tum bhool na jaao / is liye kahi ye kahaani / jo shaheed hue hein unki / zaraa yaad karo qurbaani.

I felt embarrassed by a rush of emotions and tried to hide my feelings. But what I didn’t realize was that as I looked around, everyone around me was teary-eyed, even my friends. We brushed off our emotions, but as we all walked back home biting on the laddoos, we knew in our hearts that the atmosphere of the tricolor in the air, the presence of our grandparents who narrated stories of the times that were, and our standing up from our seats, united as one, as the National Anthem played, was enough to ignite patriotic feeling in us.

To date, each year, to celebrate the date on which the Constitution of India came into effect, I play the song. Yes, it plays now from my Spotify account, but it brings back the same emotions. My eyes feel moist, and I am reminded of how we’d rub the oil left on our fingers from the puris onto our denims, and later lick off the sticky sugar syrup residue of the laddoos from the same fingers, and then go on to enjoy a holiday that always started feeling wonderful.

Purva Grover is an author, journalist, poet, playwright, and stage director. A postgraduate in mass communication and literature, she is the founder-editor of The Indian Trumpet, a digital magazine for Indian expats in the UAE. She can be reached at grover.purva@gmail.com. To comment on this article, please write to letters@khabar.com.