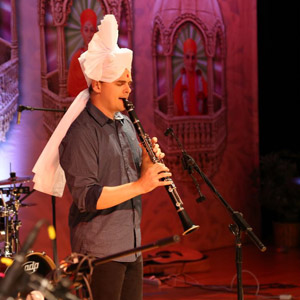 How a white American boy from small town New England grew up to do more for the cause of Hindustani and Carnatic music than many Indians have.

In many ways, Shankar Tucker epitomizes all that is the polar opposite of the regressive world view of Trump and his supporters. While the latter are all about a monolithic white supremacy and its bland and insular world, Tucker represents everything that is beautiful about cultural osmosis—of reaching out and being inclusive as opposed to hunkering down and being exclusive.

It is thanks to his embrace of Indian culture and music that this clarinetist and composer has given the world ‘The Shrutibox,’ a series of music videos that is widely popular with over 12 million views from about 100,000 fans. This collection, fusing Indian classical music, jazz, and popular music, has been on the front page of YouTube and MTV India, and has recently been included in the Smithsonian Museum’s exhibition on Indian American Culture. Tucker’s Shrutibox has done more to claim young Indian-American converts to Indian classical music than most. His impact in this trend is not unlike that of the very successful Indian Raga, which offers fellowships in Indian classical music and employs modern tools and technology to promote it.

Trained in Western classical music at the New England Conservatory of Music in Boston, Tucker traveled to India and studied with the renowned flautist Pandit Hari Prasad Chaurasia at the Vrindaavan Gurukul in Mumbai in 2010.

Tucker recently released a new CD album titled Filament with the purpose of creating a new musical world that is influenced by Indian and Western music. Why does Tucker’s fusion music resonate with youngsters? Is it because it is hip, exotic, trendy, or simply beautiful? Tucker, who divides his time between India and U.S., gives us a glimpse into his life as a musician and composer.

You were named Ambrose Tucker at birth, and you received the name Shankar because of your association with Mata Amritanandamayi (Amma)?
That’s right. I was about 10 years old when I met Amma. I remember that everyone was going up to her and asking her for a new spiritual name. I just thought it would be really cool to do that, and so I did it. I don’t know, it seemed to lead me down a certain path. There was always a lot of music going on at her programs and I was always a part of that. I think that it sowed the seed in me to be involved with Indian music from a pretty young age.

Do you feel that her blessings have carried you further than you could have possibly achieved on your own?
I think so. There are two different ways of looking at it. One is that her blessings made a lot of amazing things happen and the other was just being around her organization opened me to a view of culture from a young age that I wouldn’t have seen otherwise. And that really fascinated me.

Your work has primarily been in the sphere of fusing Western music and Indian classical music. Have you also experimented with devotional music?
Yes. Because of Amma’s programs, I actually started from the devotional sphere and explored outwards. In Indian concerts, a singer or performer will often sing or play a bhajan (prayer) at the end of a classical performance. Musically speaking, there’s a lot of similarity and overlap between Indian devotional and film music. I would say that the music is 90-95 percent the same in all the Indian musical genres.

What about Western music and Indian music? Do you see any fundamental differences between them? Do you feel that they are incompatible in some ways?
No. My whole approach to music has been to prove that the two systems are very compatible and differences that seem huge are really not that big. The differences are much more stylistic than fundamental. But it’s not to say that style isn’t important. The way that you embellish a melody, which you could call ornamentation, is a very deep, integral part of the music itself. I believe that it’s more the stylistic differences that are separate. But beneath those differences, a lot of the musical scales are the same; a lot of the principles of music are the same. 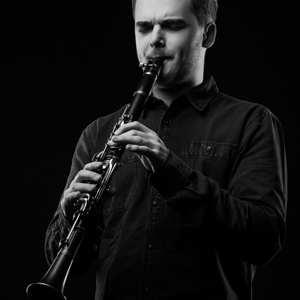 You studied with sitar player Dr. Peter Row in Boston and the flautist Pandit Hari Prasad Chaurasia in Mumbai. How have they influenced your musical goals?
At first, the idea of playing Indian music on the clarinet seemed a little crazy. Dr. Peter Row in Boston was a great mentor and very encouraging of my desire to move to India to study Indian classical music. For five years before I got to India, I listened to Pandit Chaurasia’s CDs trying to play along with them. Hariji was like a big musical idol. Once I got to India, I was amazed at what I experienced. Studying with Hariji was amazing. His teaching style was vastly different from anything that I had ever experienced before.

What did you find fascinating about Pandit Chaurasia’s method of teaching?
Hariji is like a silent figure and is very revered at his gurukul (school). He sits in front of his class, a small room of about eight to ten students and plays a phrase on his instrument. Everybody has to repeat it. He starts out with simpler stuff, the beginning of the alaap (slow melodic phrase). You just try and pick out what notes he’s playing and as you get the hang of that, you really start picking up on the subtleties of his phrases and the more complicated stuff. He teaches 2 ½ and 3-hour classes, back and forth, not doing any talking, except for perhaps “You’re out of tune,” but not more than that. His class is really the same for almost any level student; the experienced students come back and do this class along with the beginners who are also sitting with the class. It’s cool, you have the feeling that it’s a kind of timeless thing that you’re experiencing.

Your training is in both Indian music as well as Western music, but your base is Western. When you listen to an Indian melody, are you falling back to adapting it to your Western concepts?
I don’t think so. One big part of that is both music systems have the same twelve-tone scale, so you kind of hear it in the same way. The biggest thing that sounds foreign to Western ears when listening to Indian music is the Indian ornamentation. So if you can get a hang of that, the melodies are naturally quite beautiful, for anybody.

Even for Westerners?
Yeah, I think so. Melody is such a beautiful and unique part of it and I don’t think it’s inaccessible to anybody. Western traditions in the last 100 years or so have been all about exploring different, crazy, weird things and just trying to hear that. To be honest, compared to a lot of contemporary Western, especially classical and jazz music, Indian melodies are pretty conservative. It’s not something that people are not going to hear and not get a sense of.

What is your basic approach to fusing Indian classical compositions with Western music?
Indian music and Western music have different strengths. Together, they can benefit each other. Western classical music has a very unique element—the idea of an orchestra or symphony. You can bring a lot of instruments together and create an atmosphere by layering sounds. Indian music doesn’t really have the same system. It’s mostly solo instrument or solo voice and somebody follows it. One very interesting way of combining the good parts of different musical cultures is to have an Indian voice or instrument backed up by a Western orchestra. Combining the two different systems of music has been my approach to creating fusion music. It’s also fun to explore other avenues such as folk music. 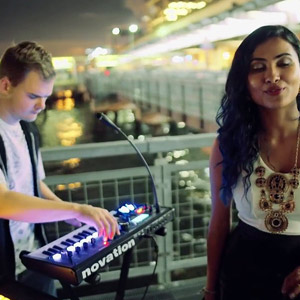 You have played with the internationally renowned tabla maestro Ustad Zakir Hussain. Which other Indian musicians have you collaborated with?
At one time I mentioned to Pandit Chaurasia that I was a big fan of his recordings with Ustad Zakir Hussain. He replied “Oh, you want to play in his next concert in two weeks?” So I got to participate in the concert. I played in the back trying not to screw up, trying not to play any wrong notes! Ustad Zakir Hussain is a legend. I also collaborated with the singer Shankar Mahadevan in Bangalore during a music festival. That was an amazing experience. I have also worked with the singer Vijay Prakash. Other than these senior musicians, I have mostly worked with the younger, new generation of musicians.

We’ve moved a long way from natural sounds and real instruments, and have entered an era of electronic music. Do you still continue to believe in the power of real instruments or are you moving away a little bit to exploring electronic music with hi-fi gadgetry? What’s your take on how things are today and the relevance of what we’re doing?
I use both, traditional as well as electronic instruments. Which instruments I use depends on the project that I’m working on. Computers have been a big part of production for the last couple of decades. Sonically, computer generated sounds have come into pop music a little bit more than other genres. Personally, I am a huge gearhead and I love all the new electronic gadgets. I’m trying to learn about it, if not use it in music because it is pretty fascinating. I do think electronic music has become the new instrument of a new generation of musicians who have grown up with production on computers. And they’ve embraced it. It’s probably the equivalent of when piano was first invented 300-400 years ago and all the kids grew up playing piano. The way that that instrument has become part of the culture, I think that’s now happening with computer production. I use it sometimes when appropriate, and it’s not always appropriate. And of course, real instruments are always going to have a place in and a value in music. Both worlds co-exist for different audiences listening to different things. I don’t think there’s really any competition.

In your opinion, where are we going with combining Indian music and Western music, and the type of work that you are doing?
Indian electronic music is a whole movement on its own. There are huge music festivals for electronic dance music specifically. To be honest, I don’t know who the audience is for that and I haven’t been that involved in it.

At 29 years of age, you have achieved quite a bit of success. How do you feel about the future? Is there perhaps a new direction that you want to take?
I like experimenting with live sounds, working with the camera, creating and editing videos. I really want to do more from a production standpoint going forward, and working with a lot of different artists that can carry the music into different genres and different directions. I connect with a lot of different genres, and I want to be able to explore genres such as folk music, pop music, and electronic music.