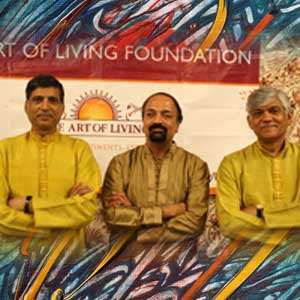 An unusual musical experience—a concert where masters of the North Indian Dhrupad form sang classical works of a great South Indian composer—enthralled music lovers in Houston in early May. The event, titled “Meditative Moments,” featured the renowned Gundecha brothers—Umakant and Ramakant Gundecha—singing the Sanskrit compositions of Muttuswamy Dikshitar, one of the revered trinity of South Indian composers. Dikshitar, who lived from 1775 to 1835, wrote under the signature “Guruguha.”

Dhrupad is the oldest genre of North Indian classical music, having originated in the 11th and 12th centuries. Dhrupad is a compound word derived from Dhruva (the fixed star or North Star) and pada (a musical composition). The idea of having North Indian Dhrupad masters present South Indian classical compositions was conceived by the Ohio-based Kanniks Kannikeswaran, a reputed musicologist, composer, and musician.

Before the concert, the audience, a diverse mix of South Indian (Karnatik) and North Indian (Hindustani) music lovers, excitedly wondered, what would the Dhrupad masters present? Dikshitar’s compositions in a Dhrupad context? How would that work?

The answers to these questions came in Kanniks Kannikeswaran’s multimedia presentation, which introduced the audiences to both the musical forms and went on to illustrate the similarity between Dhrupad and the compositions of Dikshitar.

The similarity became all the more evident as the concert unfolded. The Gundecha brothers began with a long meditative movement—aalap—in Raga Kumudakriya (unique to the Dikshitar tradition) and proceeded to give a mesmerizing rendition of “Ardha Narisvaram.” They followed it with aalap in Raga Hamir and the composition “Parimala Ranganatham.” The traditional Dhrupad “Jayati Jayati,” chosen deliberately to illustrate its similarity in pace and phraseology to Dikshitar’s compositions, came next. They concluded with their mega hit “Shiva Shiva” in Raga Adana.

It is a rare occurrence for South Indian classical compositions to be sung in an authentic North Indian classical format. Both groups in the audience—Hindustani and Karnatik music lovers—were equally moved by the unique performance. Many in the audience observed that the placement of Dikshitar’s compositions in a Dhrupad setting was “seamless” and remarked that this was history in the making.

In conversations with Khabar, Kanniks Kannikeswaran and the Gundecha brothers talk about how this extraordinary experiment came to be.

How did you come up with the idea of inviting the celebrated Dhrupad maestros, the Gundecha brothers, to sing the South Indian composer Dikshitar’s works in the Dhrupad format?

I heard an album of shivastutis performed by the Gundecha brothers back in 2002 and I was blown away by how similar they sounded to some of Dikshitar’s compositions. It was this experience that led me to delve deeper into Dhrupad and into the world of Dikshitar—a voyage of discovery and exhilaration at every step. After sharing my research and findings through articles and lectures, the idea that had occurred in my head in 2002 came back to me. “What would it be like to listen to the Gundecha brothers sing Dikshitar’s compositions?”

I expressed this to them when I visited them in Bhopal, India, in 2011. They listened to me sing the compositions and readily agreed.

What drew you to Dikshitar’s compositions in the first place?

I learned a significant number of Dikshitar’s compositions as a child. Right from my childhood, I felt that many of Dikshitar’s compositions were different from other Karnatic music compositions that I was familiar with. A significant number of the 240 compositions he composed are set to a six- or 12-beat rhythm cycle with a high incidence of syllables in the lyrics of the composition. Dikshitar shines through as an innovator who was able to deal with external musical influences and create a unique musical paradigm that was his own. Plus the references to temples, puranas, characters, iconography, festivals, traditions, all resonated with my interest in temples and sthalapuranas.

Tell us what else you discovered about Dikshitar and his work.

Dikshitar lived 200 years ago and was from the Thanjavur area. He traveled widely and had an open mind. He studied the band music of the East India Company. Thirty-nine of his Sanskrit compositions are based on Western tunes! I was the first to record and publish all of these compositions in an album titled Vismaya or wonderment.

Dikshitar traveled to Kashi/Benaras in 1790s and spent five years there. While no biographer has made any reference about his learning the Dhrupad style of music, some of his compositions sound very Dhrupad-like in their movement. This impression was confirmed by the renowned Ustad Zia Fariduddin Dagar (guru of the Gundecha brothers) who listened to me sing a couple compositions when I met him in 2005.

You have presented your findings about Dikshitar and his work at various musical conferences. Can you tell us more about this?

I presented my work on Dikshitar’s nottusvara sahityas based on Western music at the Music Academy in 2007 and then published a paper in the academy’s journal. I have since spoken on this in various venues around the world such as the Press Club in Washington, D.C., and even Trinidad. I also produced an hour-long musical production on his life and music at the National University of Singapore.

I presented my work, “The Dhrupad Musical Form and the Kritis of Dikshitar—A Comparative Study,” at the Madras Music Academy in 2010, and subsequently at the Learnquest conference in Boston, where I met Shri Akhilesh Gundecha. I then published a paper on this topic in the Journal of the Music Academy.

Excerpts from an interview with the Gundecha brothers:

How did you get interested in learning Dikshitar compositions? Did you feel that you could sing them in the Dhrupad style that you usually sing in?

When Kanniksji visited our gurukul in Bhopal in July, 2011, and sang the compositions to us, we really liked them. We thought it would be a nice opportunity to learn and present them in a concert setting.

When we sang the compositions, it did not feel like we were singing something other than Dhrupad music. Similar tala, similar structure, similar kind of poetry—we think [these songs] were meant for Dhrupad singing.

Do you see any common features in the two systems—North and South Indian classical music?

The primary purpose of the two systems is similar, namely bhakti or devotion, and both systems have their origins in Sama Veda. The musical compositions are based on ragas, and rhythm also has a common feature, namely, the cyclical format of talas. However, the phonetic treatment of words in musical compositions may be different due to differences in languages used in North and South India.

Given the fact that you are from Bhopal in North India, did you have absolutely no trouble learning South Indian compositions?

Dikshitar’s compositions are in Sanskrit, the mother of all Indian languages. As far as musical ornamentation goes, we found it quite similar to the kind we use in our singing. There were slow glides between notes (meend) and some amount of oscillation around notes (gamaks), and we did not find evidence of any difficult or different ornamentation (such as heavy oscillation around notes as sung in present-day Karnatik music). Our impression is that the music of old times may have been similar in North and South India.

As torchbearers of the Dagar gharana, did you not feel that you would be veering from tradition by singing Dikshitar compositions in authentic Dhrupad format?

We believe we must experiment and innovate within the framework and guidelines established for singing Dhrupad. We have created Dhrupads using the poetry of contemporary Hindi language poets such as Nirala and Mahadevi Varma. In contrast, Dikshitar is a renowned classical composer. In our opinion, performers who believe in blindly copying what their teacher has taught them misunderstand the meaning of upholding and maintaining tradition. A mature and established performer’s individual experience and interpretation shape the tradition he/she carries forth.

There are numerous cases of innovative performers such as Ustad Amir Khan, Pandit Kumar Gandharva and Ustad Vilayat Khan who brought in new techniques into the musical idiom or style of the gharanas they belonged to. Dikshitar was also an innovator who lived in early 18th century in South India. While these innovators lived, they were not always granted adequate respect by their peers. They, however, became immortal due to the new elements they introduced into the music of their times.

We are always trying something new to see if it can fit into the classical framework of Dhrupad singing.

Do you think singing Dikshitar compositions as Dhrupads could become a modern trend in the world of Indian classical music?

The music that “was” is the music that “is” and is the music that “will be.” Music will always remain timeless and eternal! There is every possibility that some of the compositions created 200 years ago by Dikshitar will become popular when sung as Dhrupads. It will succeed in unifying music lovers from both systems and bring them closer to each other.

The brothers in action: Ramakant (L) and Umakant.