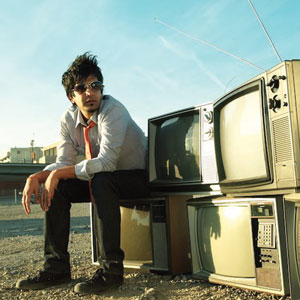 I hear melodies all the time in my mind. I’m walking down the street, I see a person or object, and it triggers a melody in my mind.”

Siddhartha Khosla is discussing his songwriting process. He’s on the phone from his home in Hoboken, New Jersey.

You have probably heard Siddhartha’s music, whether you realize it or not. He is the frontman and songwriter of the New York-based rock band Goldspot, whose oeuvre includes what I think is one of the best pop songs of the past five years, “Friday.”(If you don’t think you’ve heard it, YouTube it and I’ll bet that you’ll recognize it and love it.)

If that one’s not familiar to you, then you’ve probably heard his songs on the television shows “How I Met Your Mother,” “The OC,” “Perfect Couples,” and others; or in films such as David Schwimmer’s Run Fatboy Run, and Today’s Special (starring Aasif Mandvi of “The Daily Show with Jon Stewart”); or in trailers for blockbusters such as How Do You Know and The Dilemma; or in commercials for products made by companies such as Apple and Chevrolet.

In my estimation, an “infectious” pop song has three properties: (1) You can’t get it out of your head; (2) You want to listen to it multiple times; and (3) You want to tell your friends about it. Goldspot’s music bears all three properties for many fans, including me. It’s a crisp blend of American pop and British pop (a la The Beatles and Squeeze), infused with Bollywood.

National Public Radio has called Goldspot “a delightful band you cannot miss.” The Los Angeles Times has compared Siddhartha to “George Harrison at his transcendental best.” And The Sunday Times (U.K.) has called Goldspot “the best band to come out of America in years.”

I hadn’t thought of this before, but when Siddhartha talks about hearing melodies all the time, something clicks into place in my brain. What exactly is it about his songs that makes me want to listen to them over and over? I see now that it all starts with the melodies.

“The way my process usually works, I start with a melody. Lyrics come later—often much later,” he says.

Siddhartha does his studio work with engineer and producer Jeff Peters, who is most known for engineering the Beach Boys in studio and in concert for decades.

“Here’s a really cool thing that Jeff taught me. When you’re recording, you often don’t need to sing as loudly or play your instrument as loudly as you do when you’re performing. Playing in the studio is just very different from performing live. In the studio, sometimes you need to sing or play more subtly and just let the microphone do its job. One good example of that is the song ‘Rewind.’ The quiet way that I sing that song on the recording is something I probably would never have done without Jeff, and I think it works really well. It allows the emotion of the song to come through more subtly but, I think, in a more clear way.

“Jeff also taught me to experiment with my songs. Oftentimes I’ll fall in love with the way I did a song in a demo. But he’ll encourage me to try the song in new ways in the studio and sometimes we’ll come up with something even better.”

Siddhartha is a multi-instrumentalist. He plays guitar, bass, piano and keyboards, as well as flutes and other wind instruments. He sings all the vocals and plays the vast majority of the instruments on his recordings, other than some percussion that is played by session musicians. He is almost entirely self-trained, the sole exception being the fact that he learned flute by playing in his elementary school orchestra in Tenafly, New Jersey. As a child, he learned to sing by singing along with his parents’ cassettes of Indian movie soundtracks from the 1960s and 1970s, and by being forced by his mom to sing Hindu bhajans every Sunday at temple (which he hated doing).

The recording process involves mostly just Siddhartha and Jeff, with Siddhartha playing and singing, and both guys producing.

“I am very detail-oriented, so I can drive people nuts in the studio. I am perfectly happy to sit and work on one part or one sound for hours. I really enjoy it.

“When I perform live, I work with a backing band, and all of the detail-work is already done. Performing live, I can just have fun. I can just enjoy the music and the audience.”

When Siddhartha was studying at the University of Pennsylvania, he was involved with two a cappella groups—Off the Beat and Penn Masala. I suspect that he might have honed his meticulous musical habits there, and I ask him about it.

“Oh yes, that’s exactly right. As musical director for Penn Masala, I spent a lot of time arranging pieces for multiple voices, and a lot of time leading rehearsals, and I learned the huge amount of effort it requires to take something from an idea to a completed piece to a performance. I learned a lot about arranging, about harmony, about scoring. Today I can score for an orchestra because of the work I did with Off the Beat and Penn Masala.”

Siddhartha graduated with political science and history degrees from Penn, and was planning on going to law school. He got as far as taking the LSAT before deciding to leave it all and move to London to pursue music. After he had spent seven years in London, being a terrible bartender (by his own admission) and a struggling musician, his visa ran out and he moved to Los Angeles, where he started Goldspot. And yes, it’s named after the orange soft drink in India.

Parts of “Rewind,” one of my favorite Goldspot songs, are in 7/8 time signature, which is extremely rare in pop music. The only other example I can think of is “Mother” by the Police. I ask Siddhartha about this venture into 7/8 and he laughs.

“That wasn’t even on purpose. That’s just the melody that I came up with.”

He laughs even harder. “No, never! If you do that, then there’s the danger of writing prog rock, which is something I never want to do! The melody just came to me, and I was singing it in 7/8 and didn’t realize it. Then when we started working on it in the studio, something seemed off, as if we were missing a beat or something, and that was the first time that I realized that it was in 7/8.”

Goldspot opened for Bon Jovi at the mammoth O2 Arena in London. (The same place, by the way, where Michael Jackson was going to do his 50 concerts.) This was the first concert at the O2, so even though Bon Jovi gets credit for being the first musical act to play there, technically Goldspot is the first, since they opened for Bon Jovi on that night.

“It was surreal. You can’t see anybody’s faces. You are just singing into a vast abyss. And it was a clear mismatch of styles, with Goldspot’s sound being so different from Bon Jovi’s. But how can it not have been great? We’re opening for Bon Jovi!

“The fans there definitely appreciated our set but, clearly, they were there to see Bon Jovi. A couple of times, I said something like, ‘Does anybody like the album Slippery When Wet?’ and they went nuts.”

I say: You grew up in New Jersey, and you opened for Bon Jovi? Your friends must think that you are the bomb.

“Yeah, they were pretty impressed.”

Goldspot’s latest album is called And the Elephant is Dancing. Several years ago, Siddhartha was reading an article in The Economist about India’s economic rise and about outsourcing, and one of the lines in the piece stuck in his head: “The elephant dances while the West is sleeping.” This line inspired the album title as well as the song “Call Center Girl”.

Goldspot has performed songs from The Elephant is Dancing on National Public Radio’s “Tell Me More” as well as on taste-making radio station Los Angeles’s KCRW’s “Morning Becomes Eclectic.”

Goldspot’s music is available on iTunes, as well as at www.goldspot.net

In 2011, Goldspot plans to tour India as well as the United States, and begin working on its next album.

We get back to process. I ask Siddhartha how he captures a melodic idea when it comes. After all, melodies are ephemeral things.

“Unfortunately, most of the time, I don’t capture a melodic idea. I’ll try to re-create it when I get home, and sometimes I succeed, and sometimes I succeed to some extent, and sometimes I don’t succeed at all. Sometimes I will capture the idea by calling my wife’s phone and leaving a 15-minute message with a bunch of melodic ideas that are hitting me right then. Though, I recently graduated from a flip-phone to a smartphone,” he chuckles here. “I guess I’m a little behind the curve on that—but that’ll probably help since I can record melodic ideas whenever they come. Also, for years I’ve thought that I would like one of those little digital voice recorders.”

I advise him that those little digital voice recorders are pretty cheap and easy to find. He laughs, “Yeah, I know. Maybe somebody I’ll get me one as a Christmas present.”