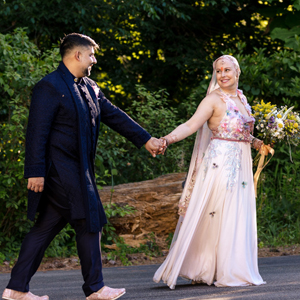 Most of us inhabiting this earth fail to be cognizant of our close neighborhood with heaven.

We dread death while on this planet, but sometimes it is our courage to face our mortality that places us in close proximity to divinity. Let me share my recent experience with one such death that connects earth with heaven.

About two years back, I was invited to a party hosted by my favorite couple—Aruna, a dynamic Indian lady, and Peter, an astute Irishman. I have been very proud of their marriage which I officiated about 25 years back. It was at this party, hosted by Aruna and Peter, that I met another young couple, an Indian man and an American woman, Kapil and Candace. I learned that they were planning to get married.

But to my dismay, I also soon found out that Candace was receiving treatment for a highly advanced stage of breast cancer. Both as a physician and a Hindu priest, our dialogue instantly became deeply personal. The couple showed interest in my officiating their wedding. I told them I was ready when they were to tie their sacred knot.

A few months later, they called me to discuss the details of the wedding. When I saw Candace this time, her appearance had dramatically changed. Her look of a patient with advanced cancer was inescapable. She had lost significant weight and hair from the chemotherapy treatment.

My customary premarital counseling lasted longer than usual since I probed in detail to make sure they were not just swept away by an emotional influx to marry. Candace asked me if I thought her plans were crazy, perhaps out of concern for Kapil. I gave her the example of a young woman whom I had seen dying of cervical cancer at the Emory University Hospital. During her several visits to the hospital, she was invariably escorted by a young man every single time. When the moment came when the woman was facing imminent death, he proposed to marry her. Her eyes were flooded with a torrent of heavenly tears. Yes, they did marry. Candace asked me anxiously, “What happened thereafter?” I said, “Although I have no follow-up, I don’t need to know that. Marriage was their happy ending, fulfilling the innermost need that they both longed for. While dying, you need to remember only those events that gave you gratification in life. Be grateful that you were blessed with them. She perhaps died with utter contentment.” This answer pleased both Candace and Kapil. The disease in her was replaced by ease and joy. 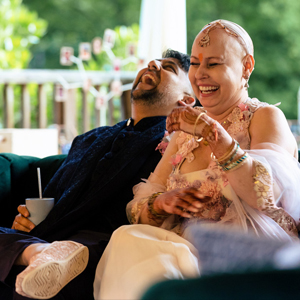 After our candid dialogue, I had no doubt that they were ready to marry each other. Both of them were calm, determined, and dedicated. A deep breath of earnest prayer prepared me to bless the couple.

Candace showed me her wardrobe full of glamorous wedding clothes from India. She asked me if she could marry without a wig that covered her hairless head. “Hair is a dead structure of the body,” I said. “That is why you need no anesthesia when you go for a haircut. The choice rests on your head, and Kapil’s too,” I laughed.

A pooja ceremony on the previous day of the wedding at his mother’s home had them beaming with joy and enthusiasm. The wedding, on the banks of Chattahoochee River, was boisterous and buoyant. The ceremony was extraordinarily elegant with everyone rejoicing. “In health and sickness,” was a self-fulfilled vow of the ceremony!

One day, the following year, there was an unexpected knock on my door. There was a delivery of their one-year wedding anniversary cake. While calling to thank them for the cake, I found out from Kapil that Candace was extremely ill. I offered to meet her, but I fell short by a small step in reaching out to her—she died before we could meet.

I could only conduct her final rites, all in the Indian tradition. Kapil’s mom and stepfather-in-law attended in a spirit of sacred silence. Nobody cried, just wept with tearless eyes.

Dr. Bhagirath Majmudar, an Emeritus Professor of Pathology and Obstetrics-Gynecology at Emory University, Atlanta, is also a Sanskrit Visharada and Jagannath scholar, the highest academic honor in Sanskrit. As a Hindu priest, he has conducted about 400 weddings, many of them interfaith. He is a poet, philosopher, Vedantist, actor, and playwright. He can be reached at: bmajmud1962@gmail.com.