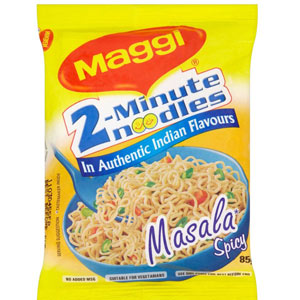 A mirthful ode to Nestle’s 2-Minute Noodle, a staple in Indian households for decades until it was shockingly and sensationally pulled back from millions of its fans, thanks to a ban brought on by findings of it containing high levels of lead!

What’s happening to the world these days? Maggi—my Maggi, your Maggi, everyone’s Maggi—has been banned! Turns out—or so they say—it was killing us slowly, one indulgent processed bite at a time—thanks to the high level of lead it was dishing up along with the noodles and the peas.

Is this the beginning of the apocalypse?

One morning in early June, I turned on the TV, and it was all ‘Maggi, Maggi, Maggi’ on every news channel. Of course, the media went to town with this Maggi-ban. Such a spicy story hadn’t come up in years. Coalgate, the 3-G affair, and all the other scandals that have been hitting India with unnerving regularity have never had this kind of impact, simply because they did not affect everyone personally or directly. Never has a scandal hit us all, virtually every single person, where it hurts the most—in our taste buds.

In 1985, our family got its first TV set. Every evening we would plop ourselves with gaping mouths in front of what later came to be referred to as the idiot box. The TV and the content were fascinating enough, but so were the ads—bringing new worlds into our living rooms. One such ad was the so-cute ‘Bas, do minute’ one for Maggi. The very concept of a hot meal in just two minutes was nothing short of revolutionary. Remember, this was the time before the arrival of instant food mixes. Even rasam and sambar powders were not available on the market. And Indian food, comfort or otherwise, is all about cooking, taking anywhere between 30 minutes to several hours. Even the fastest food, uppuma, takes at least 15 minutes, start to finish. This magic food took only two minutes? Holy cow!

“Have you tried it?” This question was frequently asked by families when they met. Of course it was a hot topic among kids in school. I still remember the day my mother first made Maggi at home. She didn’t like it, but I was bowled over. To me, the coolest kids were those who got to eat it every day for their evening snack or tiffin. We didn’t know it then, but it was the beginning of a cult.

Maggi’s first draw was, to state the obvious, that it was so easy to cook. No expertise was needed, so anyone who knew how to boil water could dish it up. There’s one Maggi ad showing a girl demonstrating her independence by cooking Maggi for her mother. That ad mirrors my life. The first thing I learnt to “cook” was Maggi, a boon on the days when the college hostel canteen was closed.

A big part of its popularity was also that Maggi brought something exotic—Chinese food—into our idli-in-the-South and roti-in-the-North lives. Chinese restaurants were few and far between. Locally, we didn’t understand it, and so they weren’t very popular. Therefore, when these noodles entered traditional homes, they brought a whole new cuisine with them. Cleverly though, the mix of spices in the tastemaker packets wasn’t completely Chinese, but was adapted to the Indian palate.

The next great thing about Maggi was that it was quite inexpensive. I don’t remember what it cost in those initial days, but it was affordable. And when inflation rose, it stayed at the about the same price. It was cheaper than restaurant food, and it could be made at home, straddling the eat-out vs. homemade dilemma. This way, it could infiltrate all the socioeconomic layers of India.

With this instant food, mothers all over the country didn’t have to worry whether their kids got something to eat. Maybe it wasn’t healthy, but at the very least, their grown up children who didn’t know how to cook wouldn’t starve when left at home alone or when sent out to college or work.

Once it caught on, there was no holding back Maggi. It became part of the family menu. It also became a comfort food, an integral part of good times, and a Plan-B meal option. Harassed mothers resorted to Maggi when they didn’t have the time to cook a traditional breakfast or snack. Friends ate this no-effort meal when they got together to talk and enjoy each other’s company. Mothers even used Maggi as a vehicle to push vegetables into fussy children. Of course, teens and young adults made this one of the staples of student culture (one fad was to eat it dry, without cooking it.)

Then dhabas began to serve up Maggi in several avatars, with add-ons like cheese, eggs, tomatoes, vegetables, or meat. This led to dedicated Maggi joints with just the one item on their menu. Maggi became a must-have in every grocery store in India, from the most humble mom-and-pop store in a village to the largest chain outlet. It even found its way into Army and Navy canteens, as Maggi became one of the Indian armed forces’ most consumed foods.

And now? Maggi, ubiquitous, easy-to-please, beloved snack food of the nation, has been banned! Ever since March 2014, when a food inspector from Barabanki, Uttar Pradesh collected samples of Maggi to check if its manufacturer, Nestle, was complying with its ‘no MSG’ claim, the Maggi empire started to unravel. Turns out, the ‘no MSG’ claim was declared false. Worse, there was lead in the product samples, at levels way above permissible limits.

The rest, as they say, is history. With state after Indian state opting for the ban, the wiggly two-minute wonder has been swept off shelves, from tiny kirana shops to plush department stores.

Meanwhile, India’s countless Maggi bhakts are hurting. From newspaper articles to tweets, blogs, and street chatter, ‘Maggi-gate’ is a topic of burning national concern! Most, including me, feel that Nestle should clean up its act and reintroduce the product after complying with the rules. (As for going after its brand ambassadors, well, if you believe in those ads, then you’ve got more lead in your brain than a water pipe from the 1900s). But till then, Maggi bhakts are left high and dry, dumbfounded at how soon their beloved comfort food was snatched from them— almost as if in just 2 minutes!