Musings: Material Girl… and Loving It! 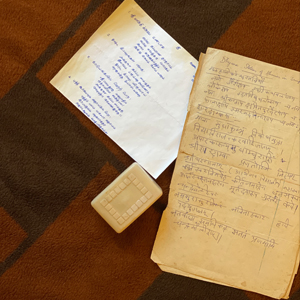 My Thatha shared this anecdote with me when I was ten or twelve years old: “You eat an apple … you consume all of it. It’s gone. But then you feel satisfied … you feel content. Is it the apple that gave you that feeling of contentment? Or was it always in you?”

Thatha (Grandpa in Tamil) has been gone for close to twelve years now and I wouldn’t want to change a thing about this cherished memory. But Thatha, one, I don’t care for apples, and two, yes, the apple did indeed give me that sense of contentment! A sense of satiety at the very least! Which brings me to my original point— things, thingamajigs, bric-a-brac, and tchotchkes bring me momentary joy. A yellow porcelain teacup designed to look like a camping mug that I bought at a small store in Santé Fe recalls languorous strolls in the downtown area. A circular cardboard coaster from Les Roseaux recalls a fine evening at the eponymous cafe in Paris, sitting at a sidewalk table, enjoying a glass of red wine and olives, eavesdropping on a raucous Middle Eastern family sitting next to us, doing the same.

Things that I have around my suburban home bring back memories of family members long departed.
A soapbox brings back memories of Coimbatore Paati (Grandma in Tamil), she of the Pears soap (pronounced “peer’s soap” in the Sankar household) and Kesha Vardhini hair oil fame. I don’t know how I ended up with it, but there it resides today, on my bathroom counter. It’s a wee thing, a small, three-inch by two-inch faded pink plastic box, with two tiers—a holed sieve to drain the drippings from the wet soap and a chamber underneath to catch the drippings. Come to think of it, that kind of soapbox must have been mighty rare to find back then. It reminds me of Paati’s fastidiousness, her high demands for cleanliness and the little handheld AM/FM radio devices that she’d request her family members from the U.S. to bring back.

I survey my home today here in suburban Atlanta and wonder if those times spent with Athai (paternal aunt) in Hosur or New Delhi sowed early seeds of inspiration to craft my home with a sense of aesthetic purpose, which I had first perceived in Athai’s homemaking. When I tend to my houseplants, my mind wanders to memories of Athai tending to her golden pathos or cactus on her sunny veranda in Hosur.

My Thatha, the one of the apple fame, didn’t care for possessions. But when I think of him, I attach my memories to possessions. It’s the yellow felt pen that he brought back from a trip to the markets in Madurai.
My family was living in Madurai then and Thatha and Paati (let’s call her Madras Paati) were visiting us.
I was probably eight or nine years old then and might have expressed a particular affinity for coloring pens and yellow ones in particular (is that why I have a yellow porcelain mug from Santa Fe?). Thatha came back from his daily walks one day, armed with one yellow felt tip pen. I asked for yellow, I got yellow. I was equally touched and bemused by that gesture. Bemused because I did not think one could purchase a stand-alone yellow felt pen. Part of me probably wanted him to get the entire set of coloring pens. When I think of Thatha, it’s the mind-eye image of him handing me a pen as I was bent over working on a piece of artwork and likely lamenting that I didn’t have the tools needed to elevate my art game. Thatha in his white veshti, half-sleeve shirt, angavastram flipped over his right shoulder. 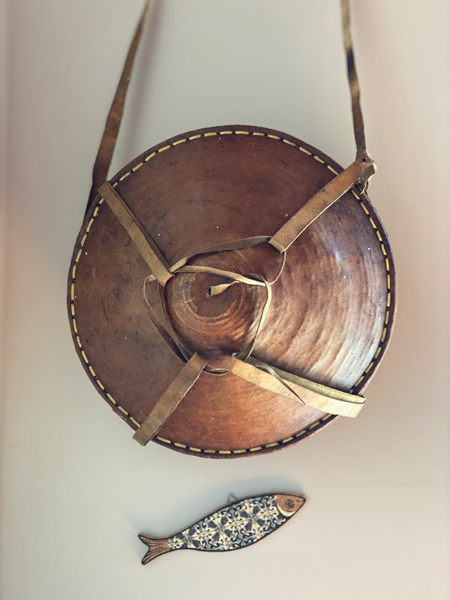 I grew up middle-class, not wanting for anything but cherishing luxuries that for others might have been banal. Consumerism and conspicuous consumption are ruining our planet, impassioned editorials in progressive magazines tell us. Materialism gets a bad rap. But if I didn’t hold on to my Paati’s soapbox or my Periappa’s (paternal uncle) West German Bayer blanket, would I still remember them as much? I would, but would I remember the nuances of the memory, the spoken words, the fondness?

I flip through my spiral bound notebook where I stow away recipes copied from blogs, websites, and those handed down from Amma, aunts, and friends. Here lies Bala Mami’s yellow sticky note recipe written in big, bold, rotund strokes for a pasta bake. This was likely my first oven-baked, home-made meal in the U.S. Here’s Amma’s recipe for dosai maavu (batter), her beautiful, curvaceous cursive gliding effortlessly from instruction to instruction. 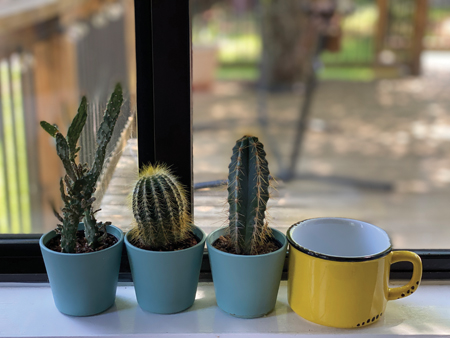 One of my favorite memories of Amma is from thirty years ago. We were living in Valmiki Nagar, Madras, where we had a row home. Amma was tinkering with an electronic device and had bust it open. Amma had always been known for her sharp intellect, but I’d never seen her tinker with a device. That was Appa’s territory. Yet here she was, wielding a screwdriver to cleave open a remote-control device or a battery chamber or something. I recall remarking that I didn’t think she’d be interested in the innards of electronic devices. I recall her saying, “Why the heck not?” When I replace the batteries in my Roku remote, I often think of Amma, sitting cross-legged on the floor, prying open that device. It brings a smile to my face.

How about the little notepad that my sister Radhi sent over from Coimbatore for my twelfth or thirteenth birthday? It was a birthday gift, sent by post, along with a birthday card. “This birthday card is perfect,” the birthday card read and went on to list a few adorably silly things on the front of the card; on the inside, when I flipped it open, it read, “Above all, it has no smelling pistakes!” I must not have been a bright child, for I remember running to the dictionary to divine the meaning of pistakes. I still have the notepad.

I am not religious. I don’t light oil lamps at the altar every day, like I grew up observing. But, ensconced in a ziplock bag of memories is Appa’s handwritten prayer note in Devanagari script, a prayer for uncertain times. I hold onto to the note more than to the prayer, as a talisman for uncertain times.

I like things. I will continue to collect weirdly shaped rocks, tiny conch shells, drift woods, and tumble weed. I will continue to buy yellow mugs or woolen carpets or masks. When I sit down with a steaming mug of black coffee and look up to the Ethiopian injera basket hanging on my kitchen wall, I recall the time I spent with my colleagues at the cattle market in Amhara. It was a bustling market set in a slushy open area, rivulets of rainwater crisscrossing the landscape. I remember weighing the option of traversing one such rivulet and risking an ignominious fall, knowing that would induce much mirth and laughter in my Ethiopian colleagues and English boss. In the end I chickened out and took the long path out and avoided the rivulet. My boss was not happy. He said he was stationed on the opposite bank of the rivulet ready to take live action photos.

Memories are indelibly linked to people, places—and things. So, Thatha, the apple might have tapped into something deep in my soul that maybe didn’t need the apple to unleash it, but the yellow felt pen reminds me that you were paying attention to the querulous complaints of a snotty little girl in Madurai.

Girija Sankar works in Global Health and writes about her work, travels, and other things that catch her fancy. She lives in the Atlanta metro area.