Musings: SORROW AND KINDNESS IN KANSAS 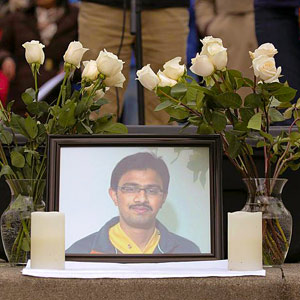 FOLLOWING THE SHOCKING DEATH OF SRINIVAS KUCHIBHOTLA, WHO WAS GUNNED DOWN IN A HATE CRIME, A GRIEVING FELLOW INDIAN-AMERICAN IN KANSAS REFLECTS ON HIS OWN IMMIGRANT JOURNEY, FROM LIVING WITHIN HIS COMFORT ZONE TO WIDENING HIS SOCIAL CIRCLE AND APPRECIATING THE VALUES AND ETHOS OF HIS ADOPTIVE HOMELAND. THE EMPATHY SHOWN IN THE WAKE OF THE TRAGEDY, AND THE MAINSTREAM COMMUNITY’S STRONG MESSAGE OF INCLUSIVITY, GAVE HOPE AND REASSURANCE TO THE IMMIGRANTS LIVING THERE.

Olathe, a community named for the Shawnee Indian word “beautiful,” was once a stopover along the Santa Fe Trail. Over time, Olathe has evolved into a thriving community of immigrants and natives, a suburb of the Kansas City metro area, home to small and large businesses, and a safe haven for people to live and raise families in a peaceful environment.

That tranquility was dealt a blow on February 22, 2017, when the racist outburst of one individual took away the life of a young India-born engineer, Srinivas Kuchibhotla, who worked at Garmin, one of the largest technology companies in the area. Deeply disturbed and saddened by the killing at Austins Bar & Grill in Olathe, Mayor Michael Copeland offered this reassurance to the public: “We have doctors, engineers, artists, musicians, and thriving entrepreneurs…all living in harmony, coming from various nations.”

Later I got a chance to speak to Congressman Kevin Yoder, a Republican representing the third congressional district in Kansas. “It is important for the leaders to recognize the value and culture that has been given by the Indian community to the American system,” he said. “I personally have been so lucky to enjoy such warmth and graciousness from many of my Indian friends. I have played cricket, participated in Diwali, attended dance and music programs, rejoiced in the spirit of friendship…”

India-born immigrant Ramesh Lokre, whose tech company Saicon employs hundreds of locals, vouches for the interest and integration of Indian culture in his adoptive hometown. “It is not just food, there is a growing appreciation and involvement in the Bollywood movies by the Greater Kansas community,” he says. 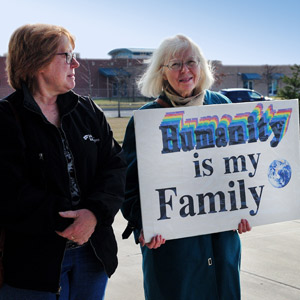 Indeed, such is the reassurance across the metro area from friends I’ve made during my five-and-a-half year stay in Kansas City. An early morning call from Bob Sherwood, a well-known speaker and author, came full of sympathy and assurance that a large population of America, a mix of every country and every ethnicity, was completely opposed to this senseless act of one individual. I had met Bob barely 12 hours earlier at a social gathering. Bob’s words provided a sense of deeper understanding of how to define this large but quiet segment of America for all of us, a segment that is welcoming, encouraging, and always assuring us that we should strive to be amongst the best and succeed at the highest level.

Sitting around the wooden table of Austins, you will see kids and families having an enjoyable time together, watching a game on TV and engaging in conversation. These key components of the American dream—education, career, and family—are what attracts every immigrant to this land. I, too, am one of them. It struck me as I spoke to Kirk Adams, co-owner of Austins, that as immigrants we engage with new friends in different, unfamiliar ways. We go out and sit in restaurants that are not our normal surroundings. We embrace a new culture, new privileges and practices, yet maybe that isn’t enough. Our temples invite people of every race and background, our festivals invoke a sense of happy gathering for all, and yet when something of this nature happens, it makes you wonder: Are we inclusive enough?

When tragedy strikes, we become polarized in the ensuing sound and fury, but as we pause and look deeper, we can find a sense of appreciation for everything that America has embraced. Our destinies have brought us to this nation in pursuit of American dreams and lives; it is the same spirit that brought Srinivas Kuchibhotla from Hyderabad to pursue his aspirations in aviation engineering.

Yes, we are inclusive and we are welcomed equally by large sections of the community. At first, as an immigrant, it was hard for me to feel that I belonged to this Midwestern city. But that changed.

“Together we stand, divided we fall,” chanted a 2000-plus gathering of every race and ethnicity as they participated in a vigil to honor those who were affected by the shooting. Dr. Vishal Adma, Director of KVC Health Systems, comes from the same city as Srinivas Kuchibhotla and has lived in Kansas City for nearly 20 years. As we walked around the Ball Conference Center on a beautiful Sunday evening, he saw optimism and hope. “We will all be together and such heinous incidents can only help strengthen and rejuvenate the community to live harmoniously rather than adopt divisive ways,” he said. 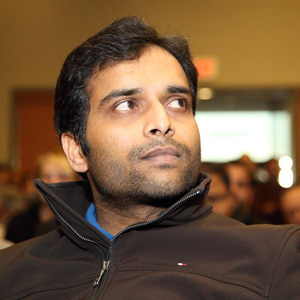 Alok Madasani, also from Hyderabad and an engineer at Garmin, was injured in that awful incident, as was Ian Grillot, who courageously ran behind the shooter and prevented further carnage. Grillot said that as humans we should value others’ lives and not adopt a philosophy of isolation.

Yes, we all must stand together in this beautiful place, for it is no stopover on a path to somewhere else. Sridhar Harohalli, president of the Indian Association of Kansas City, says, “Where else can we go? This is home.”

Bhaskar Krishnamurthy, based in Kansas City, is a widely published, award-winning photojournalist.