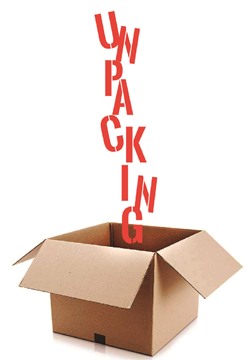 I am in the process of unpacking my parents’ garage, in the midst of the drizzly weather that San Diego, California calls winter. This is no small task. It’s taken me two years to make a dent as I slowly unpack, sort, discard, and inhale the dust from my parents’ last decade of moves—Bangalore, India to North Carolina, thence to Malaysia, there to California’s Central Coast, finally down to San Diego.

With advancing age and chronic illness, the question of what to do with the boxes that trail them has become too much for my parents. Often my mother just ends up digging out the necessities and leaving the rest. As for me, I go months, years without touching a box. And then some inner stew of guilt, curiosity, and nostalgia comes bubbling to the surface. I start unpacking boxes, some of which have now not seen daylight for six years. I start the task efficiently, wanting to just get everything done and get out, back to my own home and life. Inevitably, though, I end my efforts sitting on the garage floor, devoured by this flood of objects from my family’s wandering history, and all the memories that they hold. 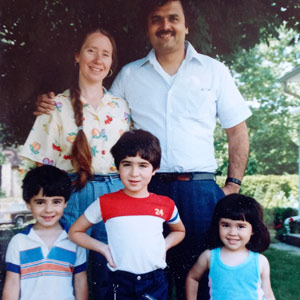 We live in an immigrant world. It’s rare for me to meet anyone who has lived in the same place for more than a few years, forget generations. In San Diego, those with long roots in the region often have cross-border ties, in both the U.S. and Mexico, which is a paradoxical existence in itself. When it comes to the South Asian diaspora, the globe tends to be treated like a personal game of hopscotch. If you live in Cardiff, Stockholm, Toronto, San Diego, Auckland, the only guarantee is that you aren’t necessarily here to stay. And the next stop could be anywhere at all—wherever the salary is good, the place peaceful, the visa process not Machiavellian, and overt racism more or less dormant at this moment in time.

We live in an immigrant world but not a rootless one; across borders we carry objects, and the stories they hold. We carry people long gone, places never seen again. In my parents’ garage, memory hangs heavy. Spend too long in there, and the weight of time and dust makes it hard to stand.

My family’s journey is encoded in these boxes, in jumbled strata. My Indian father’s perambulations from Bombay to England to the U.S. in the 1960s. My Caucasian American mother’s shift from the Midwest, where she grew up, to Washington State with my father in the late 1970s. In the mid-1990s my parents moved their three adolescents from rural Washington to the megalopolis of Bangalore, India. And even as my brothers and I left for college and our own transcontinental lives, my parents kept moving: driven by Bangalore's air pollution back to global wanderings in the late 2000s.

Here in my parents’ garage in San Diego, the boxes from all of these moves have gathered, an archaeologist’s nightmare come home to roost. Sometimes I think that if I can just finish unpacking my family’s things, I will understand our story. Sometimes I worry that I’ll finish unpacking and find, at the root of it all, nothing more than a tangle of stuff.

When I open a new box, removing layers of dusty duct tape, I do so with a little trepidation. Memories, particularly the old ones, can be dangerous to touch. I save a bag of clothespins that used to hang our laundry in Bangalore, thinking they can still be used. But as I handle them, I remember Bangalore. The sudden burst of monsoon rains, racing out the door at the first scent and sound of rain to fetch the clothes back inside, but no matter how fast you run the clothes are already drenched, as water pours in a sheet from the sky. Now the task is to hang the laundry, artfully, across every bare piece of furniture inside, beneath a ceiling fan running at full speed. But in the rains nothing ever dries, not completely. The smell of damp never entirely leaves.

I don’t believe in ghosts, but I do believe that memories can haunt with a strange solidity, and here, in my parents’ garage, I am haunted. I unravel the cloth padding the pendulum of an old, dysfunctional wall clock, and find a black and blue pillow cover that once sat on our divan in Bangalore when I was a teenager. Easy enough to roll up a comforter, stick it in the cylindrical cover and voila: new pillow. But I am not done with the memory; I am not done with the image of that old family living space, a world entirely lost.

When my family moved from Eastern Washington to Bangalore, India in 1996, we were part of a reverse migration that I knew nothing about, as a child. Now I have more context: India's economic liberalization in 1991 swept change through the country. Some of the educated professionals who had left the country for all corners of the globe came back, sensing opportunities. My father, a mathematician, was one of those who came back. He was in his fifties at the time, and had never lived in India as an adult. His American wife and three multiracial kids had never lived in India at all, and now got to know India through Bangalore, a once laidback city on the cusp of growth.

I have the vocabulary now for a transglobal transition that left me wordless as a child, but in many ways I am still wordless. Repeated migrations leave ruptures, where understanding breaks down. I dive into those cracks, and surface surrounded by ghosts.

The Bangalore that I got to know and eventually love in the mid-1990s no longer exists, transformed by lopsided wealth and five million additional people. I find myself looking for places long since disappeared in Bangalore, on streets that have changed names and appearances, shorn of their once abundant trees. Neither does the Eastern Washington that I remember from the 1980s and early 1990s still remain. Back then a good number of my classmates came from families with small farms; knowing the trends, that number would probably be much smaller today. The academic in me wants to bundle all this change under the word “neoliberalism,” but the fiction writer in me knows that explanation to be incomplete.

Instead I am reminded of an art installation that I read about several years ago, by a U.S.-settled Syrian architect named Mohamad Hafez. Hafez had visited his family in Damascus just before the civil war which set the country on fire. That visit, the last time he saw his beloved city intact, he had walked its streets with a recorder, capturing everyday sounds. His art installation paired miniatures of the ruined city with that soundtrack from a vanished world. I have few such recordings of the worlds I have loved and left and lost, but my old lives show up in my dreams, sometimes. And they hang heavy in this garage, where the end of time might arrive before I finish unpacking the detritus of my family’s many moves.

Today we live in an immigrant world, but it hasn’t always been so, not for everyone. A 2016 article by Michael Kimmelman on the Syrian refugee crisis spoke of his visit to Aleppo, a few years before the war. During that visit, Kimmelman met a man whose family had lived 800 years on the same street, and 1,200 years in Aleppo itself. I read those words as I was handling the disorientation of one more move, uprooting my (Indian) husband and myself from our home in Bangalore to be closer to my parents in Southern California. I tried to imagine being grounded within one landscape for over a thousand years. 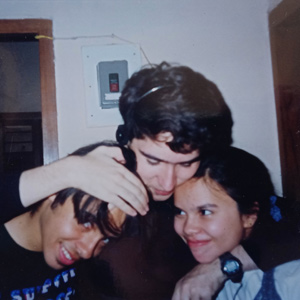 (Left) Anjali (on the right) with her older brothers, as the eldest (middle) is about to leave Bangalore for college in Washington State, 1998.

When I was twelve I stood on the roof of my new school in Bangalore, staring out at a city I could not parse. I was used to horizons, in rural Washington. I was used to a city so small I could see beyond its borders from my house, to horse pastures and wheat fields beneath a bowl of sky. In Bangalore, even twenty years ago, no matter how high you climbed all you saw was more city. Initially that suffocated me. But I grew to love the city’s energy, with time—its many-layered complexity. In our garage in Bangalore lay boxes preserving our former lives in Washington: childhood toys, old photos, heirlooms from my mother’s Swedish, English, Irish, and Welsh sides. Silverfish got into some of the family photos, rats into my brothers’ 1980s-era board games, mildew into cloth. Now I am faced with those same well-travelled boxes, in San Diego, their crumbling artifacts and decaying sense.

The writer James Wood coined the term “homelooseness” in a 2014 essay to describe his own difficulty in defining a single place as home. Another way I like to describe it is that migration can leave a person a little bit unglued. Geographic identity grows optional, when our feet lose their connection to place. Location becomes an open question. And so we become what on good days one might call adventurers, on bad days wandering ghosts, searching for a lost thing we can no longer name. 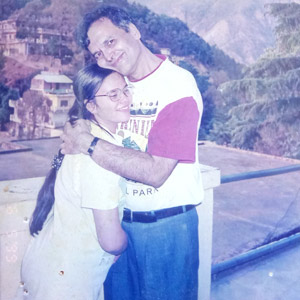 I have returned to the habit, recently, that I had when I was twelve, of trying to understand new environments from above. Get to the highest point you can climb and stare at the horizon until it starts to make some sense. If it's illegible the first day, try again the next. In Bangalore, the places with the longest views tend to be tall buildings. Within this southernmost tip of sprawling semi-urban Southern California, the coast ranges folding and re-folding the topography, the highest point tends to be a craggy upwelling of land. Find a place with a long, deep view and pause, at that summit, turret, terrace. Pause to look around you, to circle and match what you see to what you know; build a mental map of place. Follow the arc of the sun through the sky. Breathe in, and out, this strange familiar air. And feel the land beneath your feet. Reach for its buried roots.

Anjali Vaidya is a writer currently based in San Diego, California. Her nonfiction has been published in venues such as Orion Magazine, the Los Angeles Review of Books, Boom California, Public Books, Dissent Magazine and The Wire.