Musings: WHAT’S THE FATE OF DIWALI IN AMERICA? 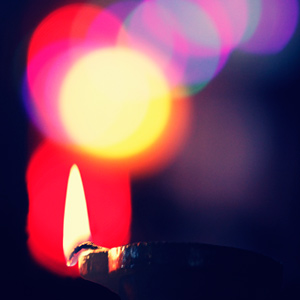 CHRISTMAS IN THE MODERN WORLD HAS BECOME MORE OF A CONSUMERIST SPLURGE AND LESS OF A SPIRITUAL CELEBRATION. CAN DIWALI BE FAR BEHIND, WORRIES THE AUTHOR, A FORMER CHRISTIAN MINISTER WHO HAS EMBRACED SANĀTANA DHARMA.

I remember those sleepless nights on Christmas Eve in childhood. My siblings and I tiptoed to the living room—often in the middle of the night, to see what my parents (er, Santa) had so lovingly arranged on the rug. I remember most vividly what must have been December of 1983, when I awoke at 4 a.m. to see Return of the Jedi figures arranged in neat lines in front of a plastic Millenium Falcon and Ewok village. I remember also the church gatherings, standing around a lit Christmas tree singing “Silent Night” and “O Come All Ye Faithful”: the words to these and many other hymns are permanently etched in my memory, even as I forget where I parked the car or the passwords to the various websites I visit.

Christmas had a certain magic: the certainty that the world would be forever changed with the gift of a new bicycle, the innocence and purity of the Christ child in the manger. But those times were also tinged with anxiety as much as they were decorated with tinsel. I worried, even as a small person, that my parents could not afford the gifts under the tree as the holiday became a measure of economic status. And then, what if, while singing carols at church, or underneath the Macy’s tree in downtown Atlanta, the magic did not come? If I did not feel particularly close to Jesus, I felt it must have been through some moral fault of my own. The roots of my later Protestant agonizing began in childhood.

Fast forward to college at Emory University in the late 90s, when I had many Indian and Pakistani friends and first attended a Diwali celebration hosted by the Indian Cultural Exchange. At this point in time, even as a religion major, I had little inkling of the religious aspect of the celebration. The event was held in a catering hall off campus, and everyone I knew was invited. My social circle included theater majors, students who ran the university publications, and my friends from the international theme house where I lived. I had worn a dress shirt and slacks, but I felt underdressed with all of the subcontinental finery around me—the young women in saris or salwar kameez, the men in kurta pyjama or Nehru suits. I felt like a wallflower at a junior high dance.

The holiday at that time seemed to be about wonderful delicious food, dancing, and music. It wouldn’t be until years later that I learned the story of Shree Ram’s sojourn through the wilderness to rescue his beloved Sita from the demon Ravana. Now the festival, to me, is about the defeat of the ego nature and the return to Ayodhya, the city where there is no war. The holiday is about conquering the internal strife and finding peace and acceptance. I associate the festival with goddess Lakshmi, whose image is situated in the small mandir on my living room mantel next to Ganesha and Kāli. She helps me to see the beauty in life, in the earthly and this-worldly, to not be such a reclusive curmudgeon.

As an outsider, a newcomer to the tradition of Hinduism or San¯atana Dharma, I don’t have the pressure that I know a lot of my Indian friends feel. I can go to the temple if I want or just say a puja on my own. I am on the very periphery of the temple that I sometimes visit, which gives me a little breathing room. I can go and worship quietly, take darshan from the devas, and return to my life feeling refreshed. I know that, as someone who has converted to this tradition on my own and not through marriage, I might not be fully accepted as a Hindu, at least in some circles. But that’s okay with me. I can still explore the spirituality of the tradition, which is really what brought me to the feet of Lord Ganesha in the first place.

I know that I will probably always celebrate Christmas with my immediate and extended family. To be honest, I do not like many aspects of the tradition, like the rampant consumerism. I don’t like the pressure to buy people a bunch of stuff that they probably don’t even need. I would really rather not hear “Silent Night” every time I go into the drug store. I don’t like how every shopping mall pukes red, green, and silver, as though retail suddenly “got religion” every Thanksgiving. I still like the story of the little holy child in the manger, with all of the animals gathered around, but the whole affair has gotten overblown. I like spending time with my family, but the pressure of the occasion always gets to me.

So I endure, like everyone else, and breathe a sigh of relief sometime in early January. The season of overstimulation ends, and the stark winter of January begins. Perhaps it is no accident that my favorite Christmas hymn was always “In the Bleak Midwinter,” which, to me, captured the essence of the holiday better than all of the trumpeting angels and gaudy wise men. As someone who values quiet and contemplation, I wish I could get everyone to just chill a little bit around the holidays. I wish we could concentrate a little more on the meaning behind the festivities and not get so carried away with the intense spending and so¯cial pressure. I wish we could concentrate a little more on the present and a little less on the wrapping.


As Diwali, like Chanukah, gets pulled deeper and deeper into “Christmas-equivalent” status, the hype is likely to increase. Barack Obama has famously celebrated the occasion, and more and more non-Hindus have a rough awareness of the holiday. I think it is great that an American president would recognize Diwali in this way, but we should be wary of Diwali going too mainstream in America. If America does anything well, it’s blowing things out of proportion. Do you really want to walk into the drugstore and hear Garth Brooks singing his rendition of “Shubha Diwali”? Will Diwali merge into Thanksgiving and Christmas, becoming a sort of holiday glop at the end of the calendar year? Will Target be featuring lamps and garlands next to the Halloween decorations and papier-mâché turkeys? Perhaps one day Hindus will be posting placards that say, “Rama is the Reason for the Season.” Maybe I am paranoid to worry about such things, or maybe I’m still a curmudgeon at heart.

But there is still a message behind Diwali and Christmas that cannot be effaced no matter how materialistic the celebrations become. The darkness, the egotistical nature, the self-serving attitude, is never all-encompassing. Evil, though it seems to rule the world, is ultimately fragile and temporary. Some shepherds keeping watch over their flocks by night, or an army of monkeys and bears, can ultimately defeat the darkness of fear and greed. Prayers, mantras, and songs can still focus the mind on what matters in life, bringing forth feelings of gratitude and compassion. If we can all bear in mind the true purpose of these occasions, the holidays will be cause for true celebration.

David Dillard-Wright is a professor of philosophy and religion at the University of South Carolina and a former United Methodist Minister.