Musings: Off the Pepper Wagon 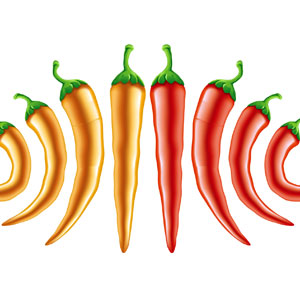 Were peppers becoming for me what drugs, alcohol, and cigarettes were to people who couldn’t do without them? What could have caused my addiction?


Recently, a relative from India smuggled the newest, hottest, Bhut Jolokia or Ghost Pepper (eat and you see ghosts) for me. However, I had made a New Year’s resolution to control my pepper consumption when, after going through the pepper ladder and conquering the Habañero, I had realized I was a pepperholic. But now that this hot one from Assam was before me, I was tempted to withdraw my resolution. After all, with a capsaicin heat index of 1,001,304, it tops the Scoville scale, dethroning the Habañero, whose spicy heat measure stands at 580,000.

I still remember that time long ago when I had taken on the Habañero challenge. I had started with the lowly Bell (zero on the Scoville scale), and had comfortably progressed to Jalapeño, Serrano and Thai peppers. While my friends marveled at my capacity for tolerating spicy peppers, I knew I was merely training to conquer the Habañero.

Before I ate it, I accidently learned the Habañero’s medicinal qualities. While suffering the pain of a root canal, I chopped the peppers with my bare, gloveless hands for a casserole for my lunch one day. That night, my toothache was gone because my hands were on fire. The next afternoon, when I ate the Habañero, this mystical experience brought tears to my eyes and fire to my mouth, throat and stomach. For several days my stomach churned and rumbled like Mount Saint Helens before it erupted. However, once the fire in my body was doused, my tongue seemed to crave the hot stuff on a regular basis.

Not only did I need my daily dose, I also coerced my family into becoming pepper connoisseurs. I forced peppers on my daughter in the name of health until one day she held her stomach and asked, “Mom, should good food burn my mouth and make holes in my stomach?”

I was an addict! Being an equal-opportunity pepper consumer, I used them all. Any color: green, red, yellow, purple; or any form: fresh, pickled, powdered, liquid. But my family was suffering because of my madness, and I needed to make amends to them. Were peppers becoming for me what drugs, alcohol, and cigarettes were to people who couldn’t do without them? What could have caused my addiction?

To find the cause, I did what any good therapist would recommend. I delved my suppressed memory bank to uncover the source of my problem. Sure enough, a long forgotten incident resurfaced. When I was three years old, I had a pet parrot who loved to start his day in India with a green cayenne and a slice of guava. My mother used to tell me, “This is your parrot and you are my parrot.” One day, I took two cayenne peppers to the cage and said, “One for my parrot and one for Mommy’s parrot.”

My nose dripped and saliva drooled from my mouth as I cried while my parents and grandmother tried to cool my burning mouth with sugar, milk, honey and ghee.

Sitting in my U.S. home, I was convinced that traumatic incident in my childhood was the cause of my addiction. My conscience raised objections to blaming my long-gone parrot or my beloved late mother, so I started looking at other plausible causes. When I went to the grocery store, I found the culprit: the tempting display of beautifully arranged colorful mountains of assorted peppers. I gazed at the harvest, smelling the hot ones, picking up a few, and putting them in my cart. Then I remembered my resolve. With sweaty palms and teary eyes, I carefully replaced the peppers in their rightful spots.

I went home, intending to write a petition to protest the tempting display that made me an addict. I turned on my computer and read the news. “Research proves that peppers have medicinal value. They clear sinuses, prevent heart attacks and some cancers.”

Didn’t they know that this healthful produce was addictive? As I fought withdrawal symptoms, my psyche was in turmoil. My Id desired more peppers, my Ego rationalized the addiction by blaming it on my past experiences and present circumstances, and my Superego commanded that I was responsible for my actions, not my mother, my parrot, the grocery stores, or the media. I had to stop the blame game and focus my energies toward finding a solution.

In an attempt to share my experiences with fellow sufferers, I advertised in the classified section for pepper addicts to contact me. A week went by without any calls or e-mails. Were the other addicts in denial or were they closet consumers? I should have added “Anonymous,” which seems to bring memberships to groups and readership to authors. I debated between going to a therapist and starting a one-person group. I voted for my very own session. I admitted my lack of control over peppers and wrote down the rules: only one pepper a day per meal; more peppers may only be eaten in the company of others; and no sneaking invisible peppers in liquid or powder form into food. I vowed never to entice my family into eating the hot stuff.

As I was busy making rules, my husband came home and said, “I just heard on the radio about a contest for pepper recipes. With your innovative ideas for peppers, you must enter. You might earn extra points if you emphasize their nutritional value!”

I looked at him suspiciously. Was he becoming an enabler? “Yes, peppers, like wine, have health benefits. But they are addictive. What if a lawyer follows my recipe, then sues me because she burned her mouth?”

“No one will sue you over a recipe. And being addicted to peppers is healthy, like being addicted to exercise or vitamins,” my husband offered. I still wanted to cut my pepper intake at that time. But that was pre-Bhut Jolokia. My relative had confided that she bought it on the black market. I couldn’t let her crime go to waste. I had to rise to the challenge.

I threw away my rules and stopped my one-person group therapy. Maybe I can invent a unique recipe for a pepper dessert. Perhaps Bhut-Jolokia-flavored ice cream or ghost food cake with the new potent pepper will win me a first prize. I bet I’ll go down in the Guinness Book of World Records for consuming more peppers than any woman has ever eaten before.

[Hemlata Vasavada is a freelance writer based in Mount Vernon, Washington.]