My Take: Dissecting the Kolaveri Cult 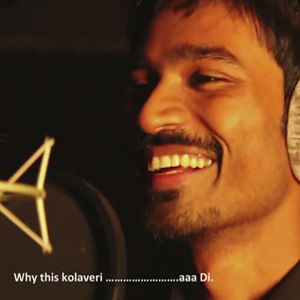 There is a phenomenon sweeping India. No, it is not the Anna effect, the jail-ail-bail routines of the netas and babus, or even the crazy weather patterns of this year. I’m talking about “Kolaveri Di,” the song that went viral almost as soon as it was uploaded on YouTube. By now, if you haven’t heard this song, you must be in a coma. The IIMs are now studying it to see how a product can go viral, and for sure, somebody is probably already writing their doctoral thesis on it.

The basic info on the song is by now well known. Composed for a Tamil film named 3 (Moonu) by an 18-year-old composer named Anirudh Ravichander (a nephew of Rajinikanth), for director Aishwarya Rajinikanth Dhanush (wife of actor Dhanush), it is a song a drunk guy is singing about, what else, love and failure, sung by Dhanush himself. The song was initially leaked to the internet, and then, when it became wildly popular, released officially. Among other firsts and mosts, the song became the top downloaded song on mobile with 210,000 downloads within the first 18 days of release.

I liked it at first sound byte when I saw it on YouTube. How can anyone ignore the catchy beat and basic nature of the lyrics? Yet the beat and the offbeat lyrics are not the only reasons for its success. The fact that the lyrics are in English with an Indian dialect also has a lot to do with its success all over India. Yes, this is no Sahir Ludhianvi-, Uday Shankar- or Kannadasan-style tour de force when it comes to the poetry. But what it shows is that Inglis or Indian-English has finally arrived.

The British colonization of India gave us two good things—one: a common enemy to unite against, which brought the hodge-podge of little kingdoms and principalities that were perpetually at war with their neighbors together as one nation; the other: a language that unites a people who are very conscious and proud of their own identity. And now, no one can deny that our proficiency in English has helped us become more effective in assimilating into Western culture than, say, the Chinese or Mexicans.

Of course, we cannot ignore the fact that our English is distinctive, with many mother-tongue influences and accent variations. Our accents range from Punjabi, Bihari, and Bangla, to Tamil, Mallu, and Kannadiga. We go to ischool and then vark to yearn money, and if we simbley vark hard, vun day we vill be rich. Sometimes we travel in sarkals because, matlab ki, we don’t know bhat we sud do. But quite often, too great an emphasis is placed on accent and grammar, and not enough on clarity and effective communication. For some reason, we think that a British or American accent denotes sophistication and class. Consequently, fear of ridicule makes many of us closet English-speakers.

This is a time when everybody is going on and on at the Indian youth, criticizing their English, making them attend Spoken English classes, which are ubiquitous in every Indian town, and making fun of their accents. Accent has become such a big sign of overt sophistication that Indians speak their own mother-tongues with a heavy English accent. A prime example is the language heard in film lyrics and on FM stations. You have to hear it to believe it, but once you do, you will realize that every Indian ‘mother’-tongue from Assamese to Urdu wears jeans these days.

Now, along comes a supremely confident person, somebody who doesn’t care if he doesn’t sound like he just landed in India from the U.S. or Britain. He is totally honest, superbly oblivious of others’ opinions, and not shy about letting it all hang out. I think that this is a reason why “Kolaveri Di” has hit a chord with the youth all over the country. “Hey, this is what we are, like it or leave it,” is the attitude, and most people are liking it.

However, there are many who have many problems with it in India. Let’s face it: it is one of those songs/tunes that effortlessly stick like a burr on your brain. You either love it intensely or hate it equally intensely. There is absolutely no middle ground here.

If you love it, no problem, you’ll get plenty of it, original version and its attendant adaptations. It is being endlessly discussed from the local tea-stall level to nationwide media. On the contrary, if you have a few problems with the Kolaveri song, take a number and get in line.

One reason could be that you hate its banal lyrics. Look around you. When you listen to “What is your mobile number, what is your smile number,” “You are my chicken fry,” and its ilk, you should get it. If you are comparing Kolaveri to “Hum bekhudi mein tumko pukare chalegaye” (movie Kaala Pani) or “Din dhal jaaye”(movie Guide), those twentieth-century ethanol-soaked love-failure songs, you are comparing apples to arnica seeds. Those Rafi songs could induce intense feelings of intoxication and angst in the soul without having to resort to booze; this number makes you want to give up drinking and take up bhajan singing. Now, is that not a good thing?

Another problem you may have is the fact that it was penned within 20 minutes, while the poets and lyricists of yesteryear would agonize for days and months over the right word or phrase. Well, there is a precedent for this. There lived a wonderful Tamil lyricist named Kannadasan. The story goes that he was called in to write a philosophical song for the K. Balachandar movie Aval Oru Thodarkathai. The movie was about a young working woman who shoulders the burden of an entire family, and is contemptuous of her alcoholic no-good brother. The song was to be picturised as sung by the “street-philosopher” brother’s character in the movie. The lyricist arrived an hour late and scribbled some lines and walked out within 20 minutes. That song was “Deivam Thanda Veedu,” which remains a classic to this day, known for its lovely music, soulful rendering and outstanding lyrics. A stanza in it goes like this:


(The start of life is the house; the end is the burning ghat. In this situation, who am I and who are you, that you sit in judgment over others? What is the meaning of life? And what is so special about you?)

My point is this: this is the era of instant gratification. The cheap “filasafy” offered by “girl-u white-u, heart-u black-u” is about as much as the tawa-deep minds of the young masses today can process. You give them a line like “Aaj dil ki keemat jaam se bhi kam hai” (“Dil jo na keh saka” from Bheegi Raat), and their bovine faces will go “Huh?” Accept this fact: you aren’t going to get any more of that soul-stirring stuff, only of the stomach-churning variety.

However, I offer you some consolation. This song-and-dance about Kolaveri will be over in a month, two at the max. Yes, in the meanwhile, you will hear horrible variations and improvisations on the “classic” original, but grit your teeth, put in earplugs and learn sign language. For, something newer will come along, and then this craze will be over. Problem is, the replacement will be even more inane, banal, and crude than this one was, because the dregs of the human soul can never be plumbed or dredged completely. Just keep those earplugs within easy reach.

[Humorist Lakshmi Palecanda moved from Montana to Mysore and is still adjusting.]