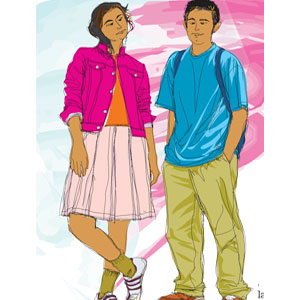 Back in the reality land of a cramped Mumbai apartment, one stuck one’s nose to the grindstone, did well at school and stayed out of trouble. Romance was a fairy tale. In real life, your parents pretty much held the reins. It helped that the society as a whole bought into the concept—I don’t remember ever questioning or worrying about this concept as a teen.

Growing up in India, I did not know much about my American cousins but one heard snippets. A particular one stuck. Apparently my cousins’ grandparents were being brought over to the United States because the girls were now at that “age” where things might go awry. I remember words like “dating” and “boys” being thrown around in hushed whispers and it was enough for me to conclude that my cousins were now going to be under constant surveillance. Since nothing escaped Grandma’s gimlet eye and the larger society of “aunties” and “uncles” was missing, troop reinforcements were being announced.

In the India of the ’70s in which I grew up, there was always this implicit assumption that boys were completely out of the question for a teen girl like me. Let alone a romance, even talking to boys was a no-no. So what if in the movies Kamal Hassan and what’s-her-name cavorted around palm trees and enticingly proclaimed that they were “meant for each other,” they were “ek duuje ke liye.” They did commit suicide in the end, did they not?

Of course this did not prohibit us girls at my all-girls high school from having our own kind of fun. Talk at lunch often revolved around boys, even if the romances were all imagined. Our girls’ school was adjacent to a boys’ one. I remember one of the girls in our group having a crush on a boy from that school. How she managed, in our daily 15-minute “recess” to even find a boy to have a crush on, no one ever thought to ask. But Prerna wanted us all to make a stable pile of stones on which she could climb and peek over the big stone wall separating the two schools. “Oooo, he is so cute,” she would giggle after she landed on the ground with a thud. The rest of us girls in the group were a little nervous about being a helper in Prerna’s illicit ogling but hey, it’s what one did for one’s friend. And I suppose a few got some vicarious thrills out of it all.

It didn’t come as any surprise to me that I eventually did fall in love with a “boy,” someone I met while in undergrad school, and that I chose to have a “love” marriage. Of course my parents were scandalized and so were his but they eventually relented.

Our two daughters growing up in America know our history. They know their parents had a love marriage and they also know that even in that context, there were predetermined rules my husband and I followed. I didn’t need my mother over my shoulder to remind me that I could not hang out late at night with a boy—any boy, even if he was my future husband.

Given all our baggage, it has been interesting to watch our teen girls now manage their changing landscape. They have tangentially asked us our opinion about marriage, whom they can marry and so on. We have made clear they can marry anyone they choose. It’s, after all, in the word the kids like to use so often, only “fair.”

In high school, our 17-year-old for a while hardly had any time for anything other than studies and we were just fine with that. Then came an after-school club started with Rob and another kid. Later came the flurry of text messages and some other hints that were pretty hard to ignore.

Soon she was asking us, “Can I go visit Cornell with Rob?” Cornell. I loved how she melded the college tour into time spent hanging out with Rob. After all which desi parent would say no to a college tour, right? When the college tour ended in the evening, she was back in our small town. Then we get a call. “Can I go to a concert with Rob?” We were mildly annoyed at being put on the spot over the phone but didn’t want to be party poopers. “What concert?” I ask. “I don’t know, it’s some local kids. And Mom, it’s in a church,” she adds, the implicit suggestion being that things can’t wander far off track in a church. I could see her rolling her eyes at me, even over the phone. After I assented, she checked in regularly (even if I didn’t ask her to) and came home at a reasonably sane hour.

Later she thanked my husband and me for not “totally freakin’ out”—her words. She appreciated, she said, the trust we placed in her. She reminded us again she was not “going out” with Rob; he was just her friend. We believe her. The thing I have realized is that we might not call them “aunties” and “uncles” but our small town in New York is full of them. Our community is as closely knit as any other and friends will routinely stop me on the road and mention seeing one of the girls or comment about how their saw their names in the paper for some achievement or the other. We rest assured knowing that the girls will be watched over, that when it takes a village to raise a child, it doesn’t matter where the village is—in India or right here in upstate New York. When I mentioned my daughter’s “college tour” episode to a really close friend in town, Mary brought her years of growing up in this country, to the table. “Our girls are going to go out there and hang out with boys when they go to college anyway. They need to know now what constitutes a healthy relationship, just like they need to practice driving a car before they leave.” Mary’s perspective was so healthy and well-rounded that it helped ground my angle as well. It wasn’t enough, I realized, to help our kids achieve academic success, we also needed to help them explore the other facets of a healthy, well-rounded young adult life. A couple of weeks later, I found out about another event at the high school which my daughter and Rob could have attended. They didn’t. When I asked her about it, my daughter reminded me, “I told you, he is just a friend. And besides, I didn’t think you would allow it.”

“Right?” she asked, checking again to find out exactly where the boundary lines were drawn.

We are convinced we won’t be needing those troop reinforcements from India any time soon. Quite
possibly never.