MyTurn: The Awesomeness of American Football 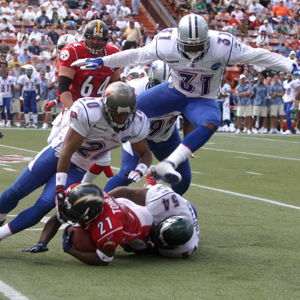 Many—particularly those who did not grow up on it—often think of this great American sport as nothing but a crude clash between oversized, testosterone-driven men. They fail to see the poetry in motion and the brilliant, chess-like strategy involved in each play—which makes the game grow on you like none other.

[​Top] Sure, it is a rough, injury-prone game, but also exquisite in strategy and technique. (Photo: Cpl. Michelle M. Dickson,​ Wikimedia Commons)

Recently, after a busy weekend watching NFL football, I made a comment at a gathering of friends that “American football is the greatest game ever invented by mankind.”

Not surprisingly, I got quite some flak from my predominantly Bengali audience. Comments like: “It is all violence—no artistry like ‘our’ football.”

I know I am given to hyperboles, but was it just that which had prompted my superlative statement? I remembered that I too had not been impressed when I was first exposed to the game some 54 years ago as a new immigrant to this country. I saw 22 oversized men scampering after a funny looking ball and crashing into each other with gay abandon. I could not make head or tail of it. The only thing I found attractive, like many of my fellow new immigrant friends, was the sideshow: the skimpily attired girls, who, I came to learn, were called “cheerleaders.” 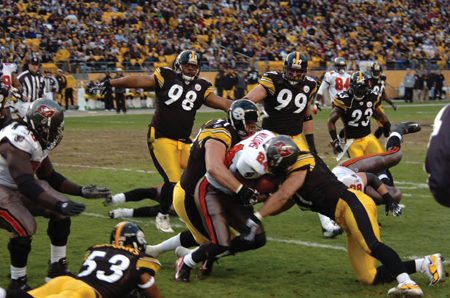 [Right] To the uninitiated, it may appear to be all about big guys and brawn. It’s only when you dig in that you realize that there is so much more to American football: strategy, teamwork, precision execution, etc. (Photo: Cpl. Michelle M. Dickson, Wikimedia Commons)

One often hears from those, mostly immigrants, who never got sucked into the lure of the game, that it is ungainly, that there is no finesse involved, that there are no brilliant sports moves—only a “chaotic” huddle of men mindlessly banging into each other. They contrast it to soccer with its incredible dribbling (a la Pele or Maradona), amazing kicks and goals, and breathtaking saves by the goalie. Or cricket with its mammoth over boundaries (sixers), stylish cover drives, fast bowlers delivering at 100 mph, or the gravity-defying, acrobatic catches. They talk about the marvel of the dunks in basketball, or Steve Curry’s three pointers from way yonder. Tennis is full of astonishing ace serves, immaculate volleys, or passing shots.

There is no dearth of examples of finesse and artistry in all these other sports, and I enjoy all of them. These sports are popular and have a worldwide following because even the casual viewer can quite easily figure out what’s going on, and whether a particular play was a winning one or not. 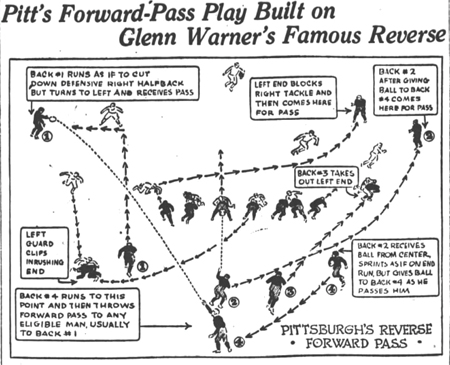 [Left] As this 1922 diagram shows, it has always been a game in which a lot of thought goes into each play. (Photo: Heinie Miller, Public Domain)​

That is not quite the case with American football. Indeed, it is this characteristic of the sport—of not easily yielding to casual viewers—that has made me an impassioned fan over my five decades of following it. To the uninitiated eye, it appears sheer madness. But echoing Shakespeare, “There is a method in the madness.” Like an onion, the game unravels for those who are willing to peel away the layers.

American football is unique. For starters, it is not a fluid game like soccer or basketball. It is a game of fits and starts. There is a break in the action in every down. The players break into separate huddles (Offensive and Defensive teams) and strategize for the next move—whether to execute a run or pass play and how to execute it. It is possibly the only game I can think of where the concepts of “blocking and tackling” are used to such systematic perfection. It is a game of continuous strategizing, perhaps more than any other game. There is a purpose, a strategy, a goal behind what appears to be a mad, chaotic scrambling and shoving.

It would perhaps be no exaggeration to say that specialization is a dominant feature of American football. Each blocker or tackler has his role specifically laid out. And there are complex rules of what is fair and what is foul when it comes to blocking and tackling. Every position appears to demand unique physical skills. The kickers and the punters are usually smaller and stand out among the rest of the team for just that reason. And they do little else during the game other than kick or punt. For a game centered around progressing the ball towards a certain direction, it is interesting that many of the players do not even get to touch the ball except if there is a fumble. 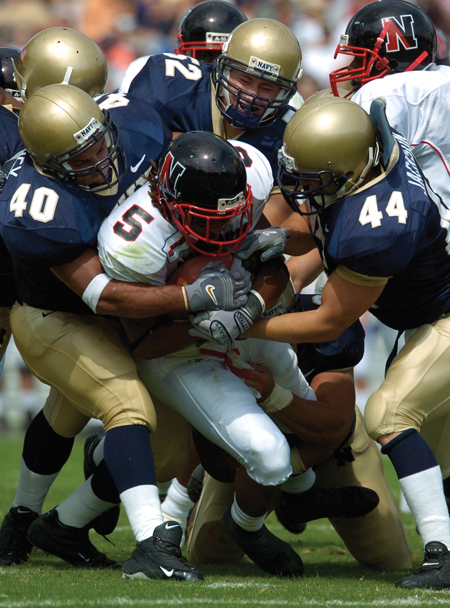 [Right] The tackle: a culmination of strategies playing out in several different clashes all over the field. (Photo: Damon J. Moritz, Wikimedia Commons)​

Then there are the wide receivers. They must have sure hands and blazing speed. Bob Hayes, the American Gold Medalist in the 100-meter dash in the Tokyo Olympics, turned to football and became a star for the Dallas Cowboys. Willie Gault, a champion sprinter and hurdler in college, became a leading wide receiver for the Chicago Bears. Ironically, some noted sprinters with blazing speed, like the legendary Tommie Smith and John Carlos, failed to make the NFL teams as they did not have the sure hands to catch the ball.

Then there are the breathtaking running plays when a running back tears through the opposing defensive line. At first impression, it appears that the running back somehow magically cuts through the mass of huge bodies. But to the experienced, discerning eye, much is going on in the mass of bodies, spread out all across the field. The offensive linemen are blocking the defensemen to create a passage for the runner. And all this has to be executed with precision for a successful play. Very often, it needs a slow-motion rerun to appreciate it all—the passageways created by the linemen for the runner to run through.

I can think of no other game which compares with the explosive, dramatic nature of American football where, in a split second, the whole tempo of the game can change. A great example would be when a team, behind in score and the time nearly running out, scores a touchdown with a long 50-yard play and wins the game. Or, in the last seconds of a game, a team wins the game with a 50+ yard field goal. Rarely do you find such examples in other sports. I can only think of a few: a last-minute goal or a save by a goalkeeper to win the match in soccer; or a home run in the ninth inning in baseball, with the bases loaded, winning the game. But they are very few and far between. 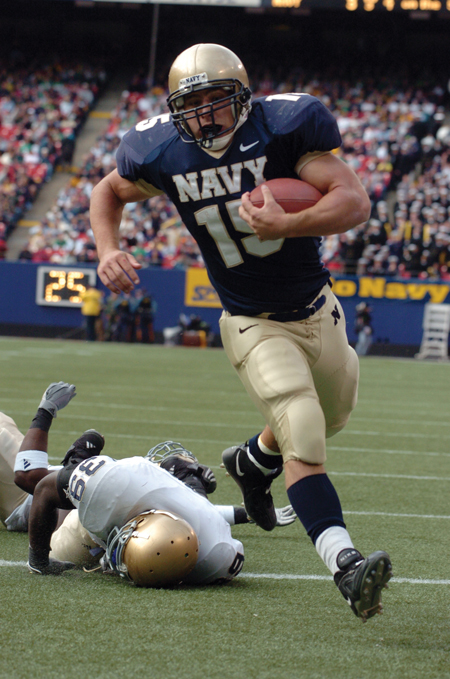 [Left] “Get out of my way!” A wide receiver needs to have steady hands and lightning speed for those fabled, odds-defying long sprints to make a touchdown. There have been only about a dozen incidents in NFL history of the record 99-yard pass. (Photo: Damon J. Moritz, Wikimedia Commons)​

Another unique feature of this sport is clock management. Each time a play comes to an end, the clock is stopped. It is also stopped if a ball carrier steps outside the field with the ball. There is no dilly-dallying to try to run out the clock. So, the official game time of one hour runs to close to three hours. And if you ask me, it is usually a very enjoyable three hours (unless, of course, your favorite team is losing badly). Clock management is an art. I still remember Kenny Stabler, the famous Oakland Raider quarterback, a few decades back—how he deftly managed the clock through a combination of complete and incomplete passes (which stopped the clock) and stepping out with the ball. He started deep into his side of the field with only a few minutes left and managed to score a touchdown and win the game!

However, for me, the most exhilarating play is when the quarterback passes to the receiver, which, when executed successfully, can result in a touchdown—the prime objective of the game. Nothing compares to a quarterback coolly completing a pin-point pass to the receiver 40 yards away. Here is an account of this crucial play:

The quarterback is handed the ball and steps back a few yards to find his receiver and throw to him. Seven or eight huge defensmen are trying to thwart his intentions with all fury. He is trying to hide behind his offensive line, all the time looking to throw. He has only a few split moments at his disposal. He spots his target 40 yards away, also covered by a defenseman at close quarters. At the opportune moment, the ball is thrown by the quarterback, with a perfect spiral, and lands into the receiver’s hands, eluding the defender covering him.

We are all in awe! A subsequent slow-motion rerun on TV further demonstrates the sheer beauty of the whole episode.

I do not know how much I have been able to sway my readers to my viewpoint. But while writing this, I became even more convinced that American football is the greatest game ever invented by mankind.

A retired civil engineer based in Concord, California, Partha Sircar enjoys freelance writing. He can be reached by email at psircar@yahoo.com.