Home > Magazine > Features > Off the Beaten Path: The Journey of a Standup Comedian

Off the Beaten Path: The Journey of a Standup Comedian 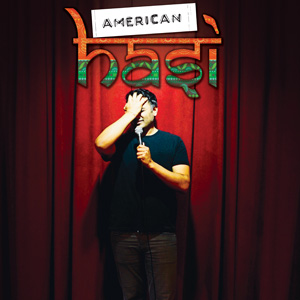 American Hasi is a squirmingly candid but endearing documentary about Tushar Singh’s struggles in finding a place for himself in the world of stand-up comedy. The film follows Singh in his bid to push the envelope as he bravely experiments with a 35-day comedy tour across six cities in India—only to find out it is not all smooth sailing for an Alabama boy like him to make young urbanites in New Delhi laugh at his jokes.

Packed inside Atlanta’s Laughing Skull comedy club, I was wedged between a film director and one of Tushar Singh’s friends, anticipating the U.S. premiere screening of American Hasi. The roomful of well-wishers who had waited for the film to show on a big screen were not disappointed.

The film’s intimate portrayal of Tushar, as he balances self-discovery and traditional parental expectations, is the draw that has viewers root for him even at those times when he bombs at some of the initial gigs in India. The film highlights themes of assimilation, ambition, and identity. Tushar, who grew up in Huntsville, Alabama, feeling like an outsider, has equal trouble blending in with Indians in India.

The film opens with a sequence of Tushar’s home videos, growing up as a chubby brown kid in Huntsville, Alabama, dressing up on Halloween as a superhero, and playing swim games in the community pool—innocent acts to blend into the Deep South environment, a place not historically known for welcoming brown-skinned people. Tushar shares in the documentary, “I was the only brown person in my elementary school, and my friends, Rusty and Joe, would ask me if I lived in a tepee.” No inward groan required… it is those exact childhood moments that Tushar used for comedy material to get audiences to connect and laugh.

Interlaced between holidays and recreational images are videos of Tushar’s Indian-born parents performing pooja or Tushar and his sister dancing garba. His parents were devoted to having both of their children grow up with their home country’s culture and traditions. Both his mother and father, the latter whom Tushar described as a “strict, intellectual, traditional Indian man,” wanted the best for their son, including “the best education leading to be the best doctor, engineer, professor—or lawyer would work, too,” Tushar half-jokingly said during our phone interview.

In his profession, his father was a highly-regarded intellectual working for NASA in Huntsville, Alabama—but in his house he was a devout Hindu, and was prone to quirky rituals like “urine therapy” for eyes and weekly astrology readings. Mixing the visual images to create a balanced identity blend goes deeper than just the visible surface; the documentary applies the contrast throughout, especially as Tushar begins questioning his cultural norms versus American values.

In a telling scene from the film, Tushar is graduating with an engineering degree from Georgia Tech, when his sister asks him if he’s excited to earn his degree. Though he doesn’t say anything, the look in his eyes says it all—the educational road often taken was not always the most desired.

What was desired was the “drug-like” rush he felt at the prospect of making people laugh. “As a fat brown kid growing up in Alabama, I was the ‘outsider,’ considering my relatively conservative Indian home life versus Bible-belt America that was just outside my doorstep." Perhaps that’s why, he said, as a school kid he always felt the inherent need to make whoever he was with laugh. While in college at Georgia Tech, attending a student Holi program, Tushar was impressed with one of the co-hosts who was so funny and off-the-cuff with his ability to handle the crowd. “The thrill of performing and trying to make a room of people laugh was so immense for me—I was hooked.” 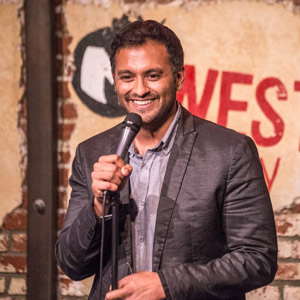 Tushar delved into Atlanta’s stand-up comedy scene in 2006, and later performed at various shows in the South.

In 2006, Tushar delved into Atlanta’s stand-up comedy scene. Soon thereafter he had a sit-down conversation with his parents telling them he was pursuing stand-up comedy. His parents were tentatively supportive, but concerned—especially his father—that he wouldn’t be financially independent or professionally successful. About three months later, Tushar’s father tragically passed away from a massive heart attack. Tushar’s haunting voice narrated the scene telling audiences about his father’s passing, and its reverberations are felt in almost every scene afterwards.

“Over the next few years I performed at various Southern shows (open mics, Democratic youth fund-raisers, etc.), with various levels of success. A few years later I tried my first official New York City comedy club open mic. Suffice it to say, I did not do well, but in the years since, I have been able to figure out my voice, what I want to talk about, how I want to talk about it, and how to think of new material.”

Working the comedy shows in the evenings, Tushar lived in Atlanta’s midtown neighborhood and worked during the daytime as an engineer. “I took some pride in how bad I was at the job,” he said which aptly resulted in him being fired. He eventually took the leap of faith to move to Los Angeles in 2013 to pursue comedy. He moved in with some friends and got another 9-to-5 job. He also started doing more comedy shows and got fired from more jobs.

That’s when he began toying with the idea of doing a comedy tour in India with a possible permanent move to his mother country. Some of the funniest bits in the documentary came from his friend’s reaction to his decision of moving across continents. One of the predictable one-liners came from the apartment owner’s wife simply stating, “You’re going to bomb.”

(Right) The comedian and filmmaker, fooling around with the camera. 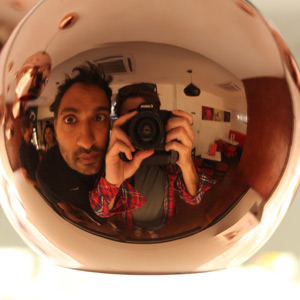 Directed by Atlanta resident Laura Asherman, American Hasi was incepted when Laura and Tushar met through mutual friends at an Atlanta bar in 2012.

“I want to make Tushar’s journey both on the actual comedy tour and as an Indian-American from Alabama, and turn it into something relatable to everyone,” Asherman said via email. Kick-started with an Indiegogo fundraiser in 2015, the 3-person film crew plus Tushar and his favorite fan—his mom—embarked on a 35-day comedy tour which started in New Delhi and ended in Mumbai.

The documentary works because it is endearing in its honesty and vulnerability, not for its professional merits. There are kinks, particularly in transitions, such as showing a postscript on the screen identifying the location as Mumbai, immediately after a shot of the Taj Mahal; and the very next scene is Tushar visiting the Bara Imambara in Lucknow! This leaves viewers who can spot the differences between the cities disoriented, while others not familiar with these cities are thinking the action is still in Mumbai.

Tushar’s main objective, standing on stage, was to tell Indian audiences funny, self-deprecating jokes, but the spotlight glared instead on Tushar’s inner-self looking for answers to cross the cultural divide.

Some of the most tragi-comic scenes were the ones that showed Tushar’s comedic bombing on Indian city stages. New to writing for that audience, Tushar’s jokes about growing up in the American South fell to groans instead of laughter. Asherman’s camera shots showed audiences in nearly empty clubs rolling eyes, shifting seats, and looking to the ground, avoiding eye contact—the success factor that comedians crave like bees crave honey. In Tushar’s on-camera monologues, hours after people have left the club, he admits his “kill-me-now” moments. The jokes were simply not working because they did not come from an “authentic place.” The next city brought more of the same—this time Asherman took the camera outside the club to ask audience members why jokes fell flat, and a trio of middle-aged females replied, “He needs new material. Those jokes are so old and already done and done some more.”

Realizing that he needed a fresh slate of jokes, Tushar decided to interview the big-name comedians—Indians as well as those who have performed in India—to find out how they found success. He interviewed Vir Das, Bill Burr, and Russell Peters on-camera, with the latter giving a strong piece of advice: “Remember, you will never be accepted as one of them.”

With newfound insight, he grew more assured on stage. His self-deprecating humor writing, on the whole, was much more heartfelt and articulate. He began to focus on his presentation and added his own flair. Tushar understood that simply retelling a community’s reality is not comedic—he had to inject the act with stories from his upbringing and be vulnerable at the same time. As Asherman points out, the film’s success is driven by “viewers who empathize with Tushar—to wince when he does crappy and root for him to succeed.” As Tushar pieces together the jigsaw puzzle that’s often called life, the common connecting thread will always remain—using comedy as his large and poignant voice.

Tushar currently has a day job in New York as he continues to moonlight with stand-up comedy. Speaking about his performances in the U.S., he fondly recalls, “I recently did shows with the wellRED comedy tour in Zanies Nashville, where Al Gore was in the audience! That was a treat.” He is currently touring the U.S. with the ABDC (American Born Desi Comics)—four up-and-coming desi comics who “decided it was time to pool together their individual voices to create the definitive comedy show for anyone curious about the first-generation experience.”

Neha Negandhi is a freelance writer and social change organizer based in Atlanta, Georgia.