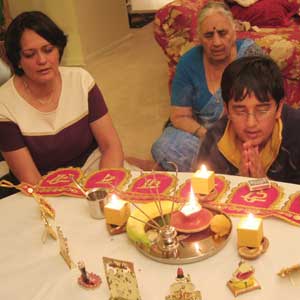 I am sitting in my grandmother’s kitchen on a stool. She is telling me the backstory of one of ﬁfteen soap operas she watches so that when I watch them with her later tonight I’d know what is going on. Amma has always been a storyteller and in every story she told—whether it was about the family, from the Ramayana, or of the soap operas she watched—she made the characters sound like her close friends and the plots essential to our lives. She is making me low-fat bread rolls although ‘low-fat’ and ‘Amma’ are oxymoronic. Instead of just deep-frying them, she pops the potatoes wrapped in bread into the microwave ﬁrst and then drops them in oil for a few seconds to get them crispy. Our family home is like a lot of other traditional Indian houses: three ﬂoors of rooms that surround a square courtyard. The ceilings are twenty feet high and there are ornate carved cutouts in the walls so that the hot summer air rises and the breeze ﬂows even with all the doors closed. This not a house designed for electric air-conditioning but rather for central air in a time before electricity. A few years ago, word that my grandparents now live in our family home alone got out to the less desirable parts of the neighborhood and there were robberies. After a harrowing cross-continental phone call, my dad arranged to have the open courtyard sealed off. But still, the sounds of the street carry up the second ﬂoor and across the courtyard to where the kitchen is. “Aloo wala, pyaz wala, gajar wala,” the mobile vendors sing out litanies of their produce in such a singsong that I was well into my pre-adolescence before I knew they were actually naming vegetables.

Amma serves me the bread rolls. I pour ketchup out of an old-school glass Heinz ketchup bottle. According to Amma, there were two things that make me her favorite. First, that I never say no to anything she says. I sweetly sing out a yes and add a “ji” at the end for respect. Whether or not I actually do what she asks is another story. The second is that she loves to experiment with cooking and I will eat anything she puts in front of me, at least once. Although she’s never said it, I think there is a third reason, that I gossip—not just to humor her—but because I am actually interested.

I break open the bread roll and hot steam ﬂoods out of the potato center. Keeping half of the breaded skin on the side, I eat the other half with the potatoes, dipping it in ketchup. I always saved half of the thick-breaded-skin because they were the best part—crunchy, with the hint of herbs and spices mashed into the potatoes all slathered with ketchup. My mind drifts to the ridiculous “ketchup sandwiches” that I used to take to school for lunch when I lived in India. They were literally two slices of bread with ketchup in the middle and by the time afternoon rolled around they were a soggy mess. Somehow, I don’t think that after the last ten years of Americanizing my taste buds I could stomach them anymore.

I’ll be back in Georgia soon, but right now I am happy. I am content. But there is a bit of bitter in my contentment. My grandparents are old, and they will die. All three of their kids are in the States—and when one of my grandparents dies in India, the other will be utterly alone. They were wonderful, caring, sweet parents. They should not die alone. And in the U.S., if they decide to move, they don’t speak the language, don’t have any friends, and have nothing to do all day while their kids and grandkids are gone.

In India, Amma cooks and cleans (to her satisfaction). The vendors put vegetables and change in a sack Amma lets down from the second ﬂoor balcony with the money. She talks from her perch to the women in the neighborhood. Amma and Babaji eat. They argue. Babaji rides around Delhi in a rickshaw. Amma cooks again.  They eat again and they argue some more and then around seven, Amma sits down and watches her soaps for three hours before going to bed. They have routines, friends, and relatives. My great-grandparents built this house and four generations of our family have lived in it. My grandparents did their part, and now, short of a retirement home, there is no one to take care of them unless they move to a foreign country.

Three years ago, my whole family came to India for three weeks. One night, there were towels hanging on the clothesline in the middle of the courtyard. There is a table against one wall at which my grandfather usually sits.  I was helping Amma in the kitchen when suddenly my dad, my sister, and my brother started playing limbo underneath the hanging towels. I watched for a few minutes and then turned and looked toward Babaji. He was watching them, the usual tired, beaten expression gone from his face. He was smiling, with slight tears in his eyes, probably thinking the same thing I was. This is how it’s supposed to be. This is good. This is family. This is being happy. But in three days, we would all be gone once again.

[Varnica Singh, a student at Mercer University in Atlanta, moved to the U.S. from India when she was 12 years old.]