Opinion: How Indian is a Manipuri? 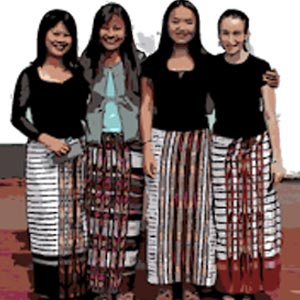 In what’s called mainland India, there remains much ignorance about people from northeastern India, leading to prejudice and allowing harassment in various forms: taunts of “Chinky” called out in public spaces, attacks on migrant women from the region, and demands by police to produce passports to ascertain nationality.

Tucked in the northeastern part of India is a group of eight states: Assam, Arunachal Pradesh, Mizoram, Meghalaya, Manipur, Nagaland, Tripura, and Sikkim. People from the region look different from most Indians. Their eyes are narrower, their noses are flatter, and when they move to other parts of India, they are sometimes made to feel that they do not belong.

Though there is no quantified study on how many of them have migrated, it can be safely said that every bustling metropolitan city in India has a sizeable number of people from the Northeast in search of better opportunities.

They are rarely featured in the mainstream media, which contributes to prejudices, ignorance, and stereotyping. Not many Indians, for instance, are aware that the Indian national flag was unfurled for the first time on Indian soil in Manipur. It is easy to see why: the region is not included in discourses on history, anthropology, or politics. What little media attention the region gets is focused on violence, drugs, and HIV/AIDS. Unsurprisingly, given this background, cries of “racial discrimination” have been raised by various student groups from the Northeast.

The recent death of two students from the region—Dana Sangma of Meghalaya, studying at Amity in Gurgaon, and Loitam Richard of Manipur, studying at Archarya NRV School of Architecture in Bangalore— has only intensified these cries. Since both these deaths occurred in metros, they were covered in the mainstream media and contributed to the emergence of the “racial discrimination” tag.

The family of Sangma, who committed suicide after being caught cheating during an exam, allege that Dana’s background was being mocked, leading to her suicide. Richard is alleged to have been beaten to death by students in his hostel. His family and supporters claim that authorities didn’t investigate his death properly, pointing to “racial discrimination” as the reason.

But is “racial discrimination” really to blame? There have been numerous other suicides in the country (even in the northeastern states) that resulted from abuse by teachers or other students, failure in exams, and other academic pressures. Making it an issue of “racial discrimination” may be an unfortunate error that easily plays to the emotional and undeniably traumatic experiences faced by people from the region and overlooks the failures of the educational system.

The “cover up” of Richard’s death, on the other hand, by college authorities and the slow response of Karnataka Police, as alleged by his supporters, is another telling commentary on what ails the police in the country. Rewind to any Bollywood police station scene: policemen unwilling to listen, much less take in a written complaint (except, of course, if you have given some token amount for “buying chai”). It’s a scene that many have experienced in real life. But it’s easier to be in victim mode and say, “We are from the Northeast and so we are discriminated against,” rather than get into the long drawn out and hopeless objection to the police work culture.

The same scenario plays out when girls from the region face sexual or physical assault: instead of addressing issues of the safety of women in general, how police and the legal system can assist women who face rape, violence, and other forms of violence, the focus shifts on how people from the region are targeted. This when women all across the country face the same situation, regardless of where they are from.

The United Nations defines racial discrimination as “any distinction, exclusion, restriction, or preference based on race, color, descent, or national or ethnic origin that has the purpose or effect of nullifying or impairing the recognition, enjoyment, or exercise, on an equal footing, of human rights and fundamental freedoms in the political, economic, social, cultural, or any other field of public life.” Going by this standard, racial discrimination isn’t as prevalent as some contend. It hasn’t stopped people from the Northeast from getting into top positions in different sectors: sports, IT, administration, theater, etc. They are well-represented in the call center and hospitality industries.


The irony is that most states in the region have had histories of turning away “outsiders” (people from the rest of India in some cases, and Bangladeshis in the case of Assam). Assam had its violent “Go back, foreigners” campaign targeting Bangladeshi refugees, while Meghalaya and Manipur had toned-down versions of the campaign in the late ’80s and ’90s. All communities and ethnic groups have specific names for outsiders and for each other, not always pleasant.

Yet there can be no denying the sense of alienation that people of the Northeast feel in their country. That this alienation can lead to outpourings of anger and dissent is clearly visible. Until real progress is brought about with regard to integrating people and the issues they have, there won’t be any end to the stories of abuse, isolation, and indifference.