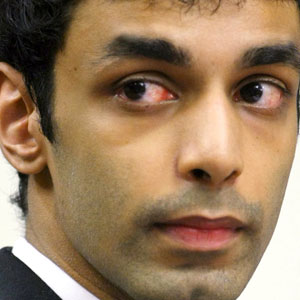 This Rutgers student committed an immature and insensitive mistake, with disastrous consequences. And now Ravi, who has been made fodder for special-interest groups, faces a largely disproportionate punishment. But the Indian-American community has barely registered a squeak of protest, exhibiting the typical “Chalta Hai” attitude, writes RAVI IYER.

While the Indian-American media has done well in highlighting the unjust “justice” meted out to 20-year-old Rutgers student Dharun Ravi, the community at large has shown little inclination for engagement. Those who have shown initiative in petitioning for him have faced the typical, “Don’t get your hands dirty” advice from friends and family.

In 2010, when Ravi was 18 and a freshman at Rutgers, in a mean-spirited prank, he twice used a webcam hidden in his dormitory room to spy on his gay roommate kissing another man, and tweeted the encounter to his followers. The troubled roommate, Tyler Clementi, who had recently outed himself to his parents, committed suicide, presumably shamed by this invasion of privacy.

In March this year, Ravi was convicted of invasion of privacy and for the hate crime of bias intimidation against Clementi. He will be sentenced in May, and faces 10 years in prison and possible deportation. If deported, sending Ravi back to India would be like sending him to any other foreign country. Having grown up in the U.S. from early childhood, and with his parents and immediate family here, Ravi has no ties whatsoever in India.

In the weeks following that conviction, my wife and I were appalled by the racist comments against Ravi that have been floating in the blogosphere and many social media outlets. Sure, what Ravi did was reprehensible, and he needs to be punished. But 10 years of prison followed by deportation is clearly unconstitutional in that it is “cruel and unusual punishment”—made possible only because the prosecution ascribed “bias intimidation” unto Ravi’s teenage prank. They cherry-picked from Ravi’s tweets to establish that he did this to Clementi because of his hatred of gays—while ignoring direct correspondence from Ravi to Clementi which clearly demonstrates otherwise.

We are even more dismayed by the apathy with which the Indian-American community has viewed the conviction and the serious punishment that awaits Ravi. The community has barely registered even a squeak of protest against it.

There were two petitions online—addressed to the White House and New Jersey Governor Chris Christie. My wife and I duly signed them and forwarded it to our network of friends. A small percentage of them signed the petitions within a day or two. However, it was disappointing to notice how many of our friends were unwilling to sign them. We got responses like these: “Is he related to you?” “Are you now becoming an activist?” “The boy must have done something wrong that we don’t know of.” “Hey be careful. Don’t get carried away; you may get in trouble. Better let the judicial system handle it.” And, “Oh what good can come from signing a petition?”

Another friend who broadcast the petition also received similar responses from our otherwise success “model minority” community. Apparently, the “Chalta Hai” attitude is still dominant in the Indian psyche.

It is a shame that the White House petition for Dharun Ravi garnered only 7000 signatures in 10 days, and eventually expired “because it failed to meet the signature threshold.” In contrast, the petition for justice for Trayvon Martin has over 2 million signatories from across the world.

These important facts about the Dharun Ravi case could convince Indian-Americans to voice their protest:

1 This is not to condone Ravi’s actions. Actions have consequences, and clearly punishment is due. However, sentencing him to a prison time of five to 10 years and possible deportation amounts to “cruel and unusual punishment,” as described in the Constitution of the United States.

2 It is apparent from the blogs that many believe Ravi broadcast live the encounters between Tyler Clementi and an older man—this is not true. The only thing Ravi did was tweet the episode. The webcam captured only a few seconds of the first encounter and was never recorded. The second encounter was never viewed—the webcam was not active.

3 The base charge is of bias intimidation. In an apology tweeted by Ravi to Clementi, he mentions being sorry for his action and does not want Clementi to leave the dorm room because of him. Also, he notes that he knew Clementi was gay and was cool with it.

4 Both Clementi and Ravi had engaged in teenage trash talk about each other’s background. The former
had said that Ravi’s parents looked so Indian that they probably owned a Dunkin Donuts. This is a case of the shoe being on the wrong foot as far as bias intimidation goes.

5 The timing of Clementi’s suicide seems to have aggravated the entire case: there were five other teen suicides in the country. In Dharun Ravi, the politicians and the media found a face to pin the bully tag on. The LGBT community saw in this case an opportunity to bring national attention to their cause. It is sad they chose to go after Ravi, considering that the bias intimidation allegation is highly questionable. Ravi’s actions were far from anything that could be described as a violent hate crime.

6 There was a note (presumably, a suicide note) left behind by Clementi that has not been made public. One does have to wonder why this was not published.

7 It is also known that Clementi came out to his parents about being gay right before he joined Rutgers. His mother did not take the news lightly and did not support him. Could this have been a factor in his decision to commit suicide?

8 The social media is rife with racist comments against Indian-Americans. That is ironical, given the fact we are indicting someone for bias intimidation.

9 Tyler Clementi’s parents are happy with the conviction—right after one of them had pretty much disowned their own child (clear from his own tweets). Clementi’s death was a tragic loss, but pinning it entirely on Ravi seems like vengeance and a misguided attempt for the parent to get closure on their own lack of understanding and love for their son.

10 The muddled New Jersey laws have been blamed for this verdict. However, one has to question, do we have to be blind to justice and follow an incoherent law that asks one to convict a person by conjecturing?

[While the White House petition has expired, there are still a couple
of other important ones that could benefit from your support: