Opinion: Think a Vegetarian Diet is Nonviolent and Healthy? 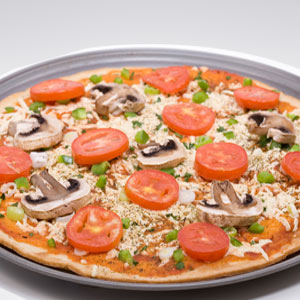 These are the two main reasons people choose to be a vegetarian. A vegan explains why her choice of diet is better with respect to both reasons. What’s more, with the abundance of options today, even a foodie can go vegan without feeling deprived.

Up until the industrial age people were never too far removed from the source of the produce they consumed. Then, thanks to mass production and commercialization, our produce increasingly started coming from across the country. In the process, we lost touch with what went into its growth and production.

Today we blissfully consume what we believe are strictly products of nature: fruits, vegetables, milk… completely unaware of the human tinkering that goes into such farm foods. A time traveler from before the Green Revolution of the 1930s to 1960s would wonder about the “organic” food labels in our supermarkets, considering most food used to be organic in those days. Turning what was natural, normal, and healthier into a trendy subcultural choice would seem to the time traveler extremely amusing if not tragic. This is a great indicator of the degree to which our agricultural products have become “manufactured” and synthetic.

But thanks to the age of information, we are again able to stay informed of how food lands on our tables. People are increasingly educating themselves on what they eat. A friend of mine gave up meat after reading the books Fast Food Nation and Eating Animals. When I gave up meat a decade ago, my father was concerned for my health. But last year, he became a vegetarian after reading the book The China Study. Deepak Chopra, in the book Creating Health, states, “Along with many other physicians, I am convinced that a vegetarian diet is the best one for health.”

Ironically, though, like millions of vegetarians in India and across the world, if you believe that you are practicing ahimsa (nonviolence) and good health by going vegetarian, think again. While clearly a better choice than eating meat, a lacto-vegetarian diet is neither devoid of cruelty to animals nor as healthy as a vegan diet. As we continue to learn more about our food and how it comes to us, the case for going vegan has never been more compelling.

Thousands of people have given up dairy after watching Got the Facts on Milk? (“The milk documentary”). Milk, you say? Haven’t mothers throughout generations nagged their children to drink milk? It is indeed an enigma why. In a book called Milk: The Silent Killer, published from India, Dr. N. K. Sharma seeks to “break the biggest myth surrounding human health” by highlighting that dairy consumption leads to diseases such as mumps, colds, pneumonia, bronchitis, heart attacks, renal stones, arthritis, and even cancer. The mucus-causing dairy products have been considered harmful beyond the infant years in some thought systems.

But even if you consider milk to be healthy, what ruins it is the incessant need of commerce to produce it efficiently and voluminously.

Actually, it is not entirely a modern-day phenomenon. This need for maximum production by hook or crook has caused suffering to cows for many decades. Researching the subject, I was devastated to learn about the cruel procedure of “doom dev” or “phooka,” by which air is forcefully blown into a cow’s vagina to induce her to produce more milk. It was this procedure that led Mahatma Gandhi to give up cow milk. “Since I had come to know that the cow and the buffalo were subjected to the process of phooka, I had conceived a strong disgust for milk,” wrote Gandhiji in his autobiography.

While the means may have changed, our greed for maximum production has not. Cows in dairy farms all over the world endure harm because they are forced to produce more milk than they’re naturally capable of yielding. Cows are repeatedly impregnated so that they’re always lactating. Another form of cruelty follows for calves: When male calves are born, they are “stored” for the duration of their short life in tiny containers designed to restrict their movements—all for the sake of producing the tender veal meal for which they are soon slaughtered.

Cows are injected with the hormone oxytocin, to trigger milk flow. This has been known to cause diseases in children and adults who consume the hormone-enhanced milk regularly. The lifespan of the animals injected with oxytocin is also drastically reduced. In short, cows are treated as “milk machines.”

But isn’t dairy required in a balanced diet? Actually, my health has been great ever since I became a vegan. According to the American Dietetic Association, “Appropriately-planned vegetarian diets, including total vegetarian or vegan diets, are healthful, nutritionally adequate, and may provide health benefits in the prevention and treatment of cancer and many other diseases.” It’s possible to get all the nutrients—proteins, calcium, vitamins, and antioxidants—in a plant-based diet, except Vitamin B12, for which I take a supplement once a month.

The benefits of dairy can be easily had from other sources. Two years ago, when my son was suffering from itchy skin, an Ayurvedic doctor advised me to include ghee in his diet. Instead, I started to drizzle a tablespoon of extra-virgin olive oil in my son’s lunch, and in a few weeks, he no longer suf- fered from itchy skin. Plant-based sources such as walnuts, flax seeds, and extra-virgin olive oil are bursting with great nutrients like omega-3 fatty acids.

Even children beyond the nursing stage can thrive on a vegan diet. My four-year- old son, whom I’m raising on a plant-based diet, is slim but healthy, active, and smart. He eats oatmeal or cereal with fortified rice or almond milk for breakfast. For lunch, it’s usually pasta or pizza. His dinner is mostly cooked beans, rice, and vegetables such as broccoli and chard. And when he wants a treat, he of course has my kaju katlis made from vegan (raw) sugar and coarse almond powder.

My son’s pediatrician, with whom I discussed our vegan diet, agreed that children do not need dairy if you can provide them calcium through other forms. Almonds, sesame seeds, spinach, and fortified orange juice are rich sources of calcium.

All that is fine you say, but is it really possible to give up the lure of meat, dairy, and the good life that popular food seems to promise? I am a Foodie! Food plays a big role in my life. It brings me comfort and pleasure. I have been baking and making sweets since I was in fifth grade. And I was also a meat eater. Growing up in Bangalore, I used to eat chicken biryani every Sunday, and would get mad at my father if he didn’t bring it for me from the restaurant. I now make the dish using seitan, made from wheat gluten. Seitan is so chewy and tasty that I have really not missed meat since I became a vegan.

Tofu and tempeh also make great substitutes for meat, and are available in supermarkets across the United States. “Did you make this with eggs?” my uncle asks me as he relishes tofu burji at my home. Tofu is also a great substitute for paneer; I use that to make “paneer” burji and palak “paneer”. Just be sure to limit tofu and tempeh to just once a week or fortnight, as some studies have shown that consuming soy products and processed foods every day is unhealthy.

I enjoy exploring a variety of grains, legumes, beans, fruits, and vegetables. For breakfast, I often make muffins or oatmeal, and sometimes make smoothies with dates, nuts, and seasonal fruits. I have fallen in love with quinoa. I make spicy pilaf and kheer with it. I love to eat pizza bursting with vegetables and bubbly daiyya cheese (vegan cheese). Sometimes, I relish eating cheese-free pizza. And for deserts and treats, I use store-bought or home-made almond milk to make a tasty carrot halwa; and kheers and payasams with rice milk or coconut milk. I regularly bake vegan cakes, muffins, cookies, and cupcakes.

During my free time, I’m glued to Isa Chandra Moskowitz’s cable show, Post Punk Kitchen, or the blogs Susan’s Fatfree Vegan, Vaishali’s Holy Cow, and Richa’s Vegan Richa. And YouTube is replete with vegan food videos from many cuisines. Countless vegan cookbooks line the shelves of libraries and bookstores all over the country My favorite cookbooks are Veganomicon: The Ultimate Vegan Cookbook and Vegan Cupcakes Take Over the World.

In my experience, it’s really easy to thrive on a vegan diet in the United States, with a little planning. Almost all supermarkets carry non-dairy milk and non-dairy butter. Everything from vegan pepperoni to vegan meatballs is available. And I’m happy to see that the vegan-friendly cafeterias are opening up in schools, hospitals, and even airports.

And so I say bon appétit and bon voyage to all those seeking to make the vegan journey!

Kumudha Venkatesan blogs about vegan lifestyle and environment at http://vegan-fare.blogspot.com/